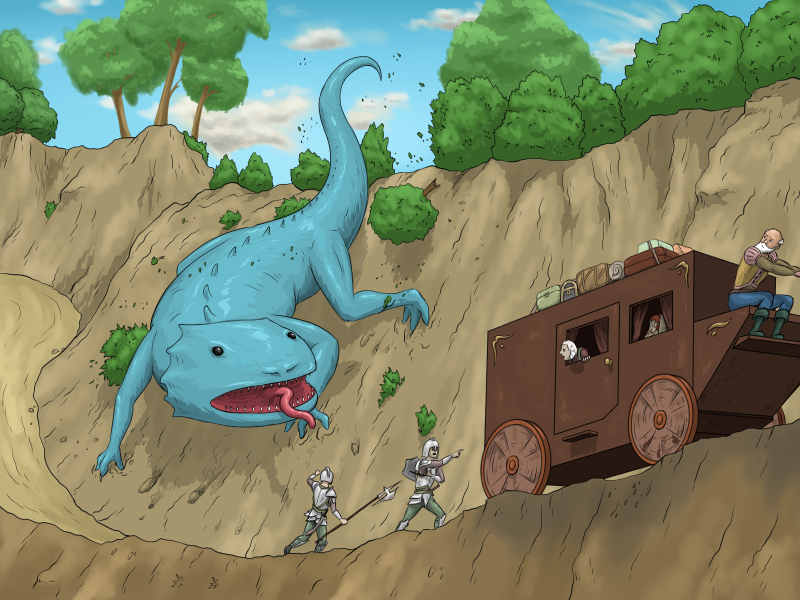 
General information and physiology
Dragontoad is a massive, fast and highly aggressive predator. Its behavior differs greatly depending on the satiation state. When a Dragontoad is satiated, it can be almost harmless. Easily determined by lowered head and slow, lazy way of movement. While satiated, Dragontoads tend to spend time idly roaming around their territories and sleeping.
Everything changes when the hunger comes. Dragontoads hunt once a week, and when it happens, they turn into ferocious murder machines. During the hunt they keep their heads high, relying on sharp eyesight and the sense of smell, targeting medium and large mammals or humanoids. Once a victim is spotted, the monster would charge and chase it until it’s caught and devoured. Dragontoad’s main weapon is its long, flexible tongue, used to shoot out, grab and pull the victims into the mouth from a significant distance. Once the victim is in the maw, strong jaws can easily break its bones and instantly kill it. The less fortunate are swallowed alive. Depending on the age and size of the monster, it may take several victims to fully satiate it.

Dragontoads are born from dog-sized eggs and can be dangerous already in the early age. Similar to dragons their life duration is incredibly long and the longer they live, the larger they grow. Dragontoads older than 50 years old are labeled as Ancient and could be easily considered as S class monsters, if not for the relative harmlessness during the period of satiation.


Area of habitat and diet
Dragontoads are relatively rare creatures but they can be met anywhere in Karandia. They prefer to live in highlands and prairies, where vast open spaces allow them to easily spot potential prey from afar. Dragontoads that inhabit jungles and woods are considered even more dangerous. Because of their size and high density of trees they can’t chase the prey freely. Such Dragontoads are forced to develop different, less aggressive and more patient hunting methods.
They eat exclusively meat. When hungry, the Dragontoads stuff themselves so full that they find it difficult to move for several hours after reaching the point of satiation. After the initial burst of nutrition spreads across their body, the process of digestion slows down and the rest of the food lasts them for a very long time.


Interaction with humanoids
If not for their rarity, Dragontoads could be easily considered a real menace. Nothing is safe on the Dragontoad’s path of destruction when it’s hungry. The sense of fear or self-preservation is suppressed and it can’t be scared by crowds, weapons and even magic. History knows many occasions when such Dragontoads even charged into highly populated settlements. Not even walls are able to stop these monsters, as their power, flexibility and strong fingers allow them to climb vertical surfaces.
Among mercenaries and monster hunters slaying a Dragontoad is a sure way to reach fame and recognition.
edit delete