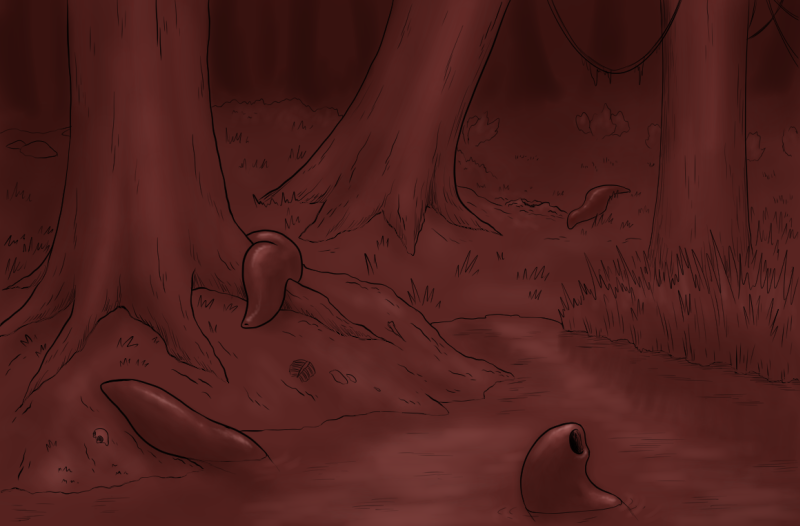 General information and physiology
Carniworms are numerous and widely spread leech-like monsters with long, thick, glossy, limb-less bodies, colored in dark tones of grey, brown, red or black. The term ‘Carniworm’ belongs not to a single species but to an entire group of sub-species (Carniworm types) sharing the ability to procreate among each other, but coming in various sizes and possessing unique physiological traits.
Carniworms are highly territorial and social. They form large colonies consisting of different Carniworm types at once. This bonding allows them to hunt more effectively, with each type exceeding others in specific tasks and compensating each other’s weaknesses.
These monsters have no eyes but have a special lifeforce vision. It allows them to see potential prey even through solid objects and water. However, the range is limited to only 20 meters.


Area of habitat and diet
Carnoworms are known for their insatiable lust for humanoid flesh and highly aggressive behavior. While they spend most of their life hunting small or medium mammals and fish to sustain themselves, when a humanoid enters their territory, they chase them with a near maniacal ferocity.
These monsters can be met in any corner of the world, from the cold North to the hot South. They dwell in areas protected from direct sunlight, like forests, swamps, canyons, caves and even in the Underworld.
Direct sunlight is deadly to them and may kill them within minutes.


Procreation
Carniworms reproduce not often, but each time lay up to thirty eggs each. They are hermaphrodites and can mate with any partner they desire, impregnating each other at the same time. Regardless of what type the partner was, the brood of each Carniworm will consist of different types.
Monstrologists still don’t know what determines the percentage of the types coming out of every brood, but they suspect that the main driving factor lies in the necessity of specific types within each colony.
For example, if a colony has lost all Slime-spitters, the upcoming brood will have increased number of them.

The eggs are laid underwater and are usually hidden within the muck. Young carniworms are relatively harmless and often become prey to other creatures.


Interaction with humanoids
All kingdoms of Karandia treat Carniworms as a high priority target and try to exterminate them wherever they’re found. Because of the relative short distance of their lifeforce vision, it’s not difficult to get away from them if they’re spotted early. This, however, doesn’t protect large number of people falling prey to these monsters each year.
Carniworms use numerous hunting methods, from slow and methodical surrounding of their victims, to direct and fast charges in the open.
The fact that some of them can easily climb vertical surfaces doesn’t help either. Numerous Carniworm attacks happen within villages and towns, especially in the settlements with poorly protected sewer systems.
Many also falsely believe that Carniworms need large bodies of water to survive and can’t be met anywhere else. And while it is true that the major population of Carniworms inhabits swamps and outskirts of rivers and lakes, some Carniworm types can travel across vast distances without the need of moisturization. 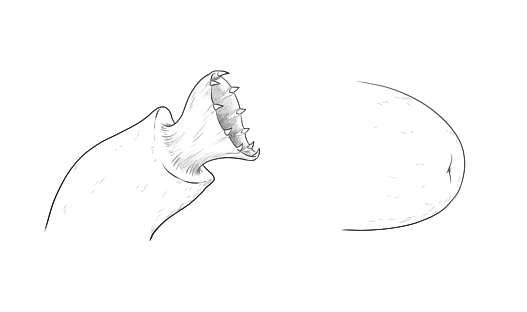 The maw of this carniworm has a similar shape and functionality of Hungry tuber’s sackbrane - stretchy membrane adorned with teeth, used to catch, restrain and consume the victim whole 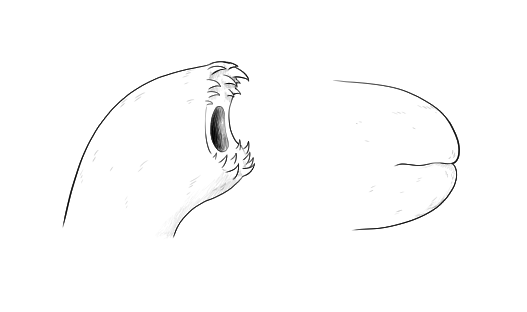 This type is known for its tremendously powerful jaws and a collection of hook-like teeth. Hookjaw carniworms tend to tear their victim into pieces before consuming 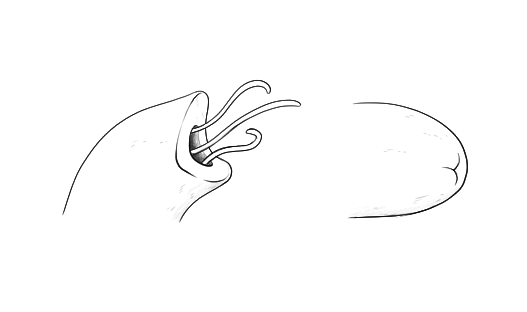 Inside its maw, this carniworm has three long, flexible tongues, which can be shot out at a distance of three meters to grab, restrain and pull the victim 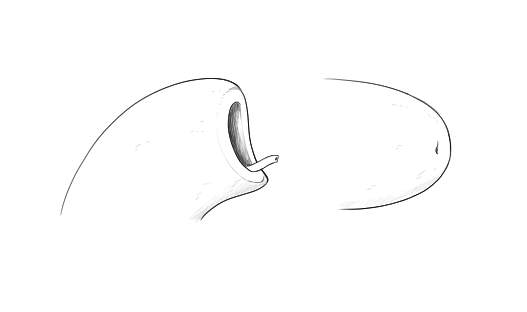 Through a tiny cord in the base of its maw, this worm can spit potent toxin, which upon contact with bare skin afflicts the victim with a short-lasting but strong weakness. This is the slowest Carniworm type, both in movement and the speed of consumption 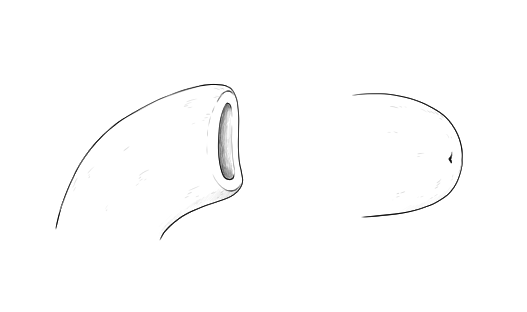 This is the smallest carniworm without special abilities, but it is the fastest of all and because of that - the hardest to get away from. It can also last the longest without moisturization 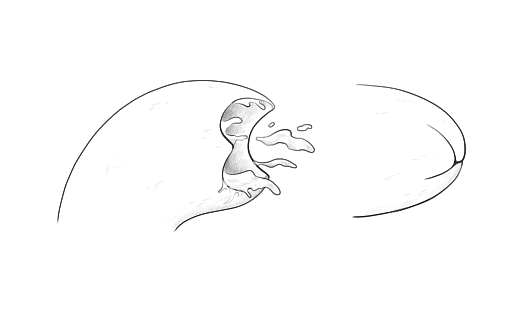 This is the largest carniworm, able to grow ten times the size of other types. It is very heavy and slow, but it can spit out large amount of sticky slime at the distance of up to five meters. This slime is very hard to get rid of and it can easily slow down or even completely immobilize the victim
edit delete
Darksh1ne 31st Jul 2022, 6:52 PM 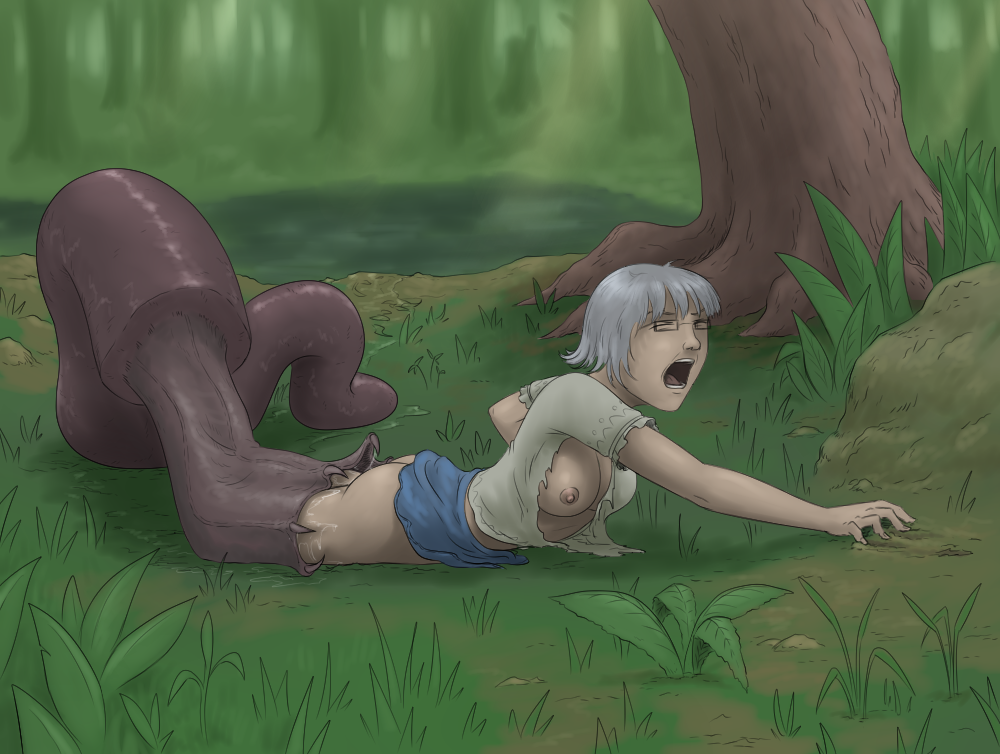