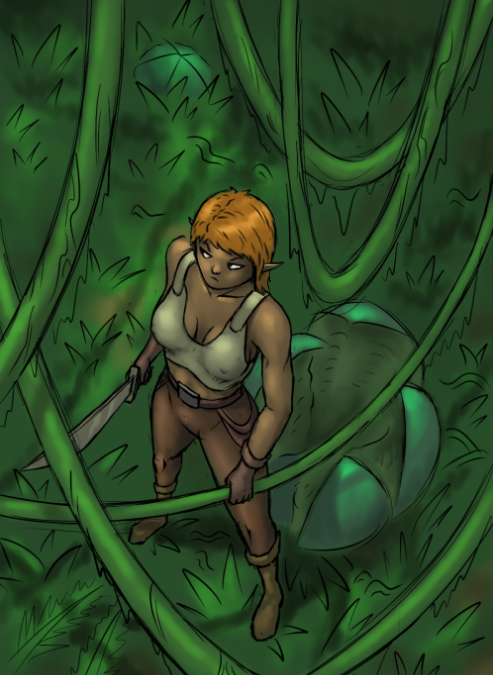 General information and physiology
Hungry tuber is a massive, ever-growing plant. One of the few predators who hunts exclusively humanoids.
Its body consists of two parts – the main body, also known as the Tuber and the Vine-maws. The Tuber is hollow on the inside and is filled with strong digestive juice. The outer sides and bottom of the Tuber sprouts multiple roots, used to collect and consume moisture from the soil.
Vine-maws are situated on top and unlike the immobile Tuber, they’re flexible and can stretch out up to three meters in every direction. The top of a Vine-maw is presented with centimeter-thick chitin armor beak, serving both as an effective striking weapon and as a photosynthesis battery.
The beak tip is the only visible part of a mature Hungry tuber. Usually, the bright green surface of the beak is easy to spot, warning potential victims if they pay attention. However, tall grass and dull light can easily conceal the beak, making the Hungry tuber near-invisible.

Under the beak Vine-maw hides a special organ called Sackbrane – an elastic, stretchy organic fabric with teeth on its rim. When shot out, it extends the total reach of a Vine-maw to up to five meters. This organ is primarily used to catch, immobilize and consume prey. When caught, the prey is sucked into the Vine-maw’s inner tunnel and through it delivered into the Tuber. Once there, the victim has no chance of escaping, as the Tuber’s outer layer is thick and the inner tunnels are sealed shut.


Area of habitat and growth progression
Hungry tubers are widely spread in the Central and Southern parts of the continent and can grow in every type of terrain except in dry deserts and rocky mountains. Soft soil, access to sunlight and occasional wet weather is all that is needed for a Hungry tuber to survive.
Its life consists of two major stages. During the pre-mature stage Hungry tuber grows as a simple harmless plant and on the surface looks like a patch of grass. The roots of the plant slowly form the tuber, which reaches maturity within a year when it grows to the size of 80 centimeters in diameter.
Upon reaching maturity, grass blades dry out and are replaced by a single Vine-maw.

Hungry tuber never dies of age. For as long as it has access to direct and indirect sunlight and moisture within the soil, it will remain in this form for eternity. If it manages to catch and consume a humanoid, the Tuber grows in size and creates another Vine-maw.
The terrifying nature of Hungry tubers is that they can grow infinitely, getting larger and covering wider territory with each successful meal.


Interaction with humanoids
Hungry tubers hunt exclusively humanoids, ignoring every other type of creatures. Whenever a humanoid approaches within the reach of a Vine-maw, it bursts out of the ground and attacks. If a person is caught completely off-guard, it would immediately envelope them into the Sackbrane and suck inside. If the prey resists and damages the Sackbrane, Vine-maw retract it and closes the beak, using it as a striking weapon and aiming to disarm and knock down the prey. If successful, Vine-maw would try to consume the prey again. Using the beak alone if the Sackbrane has been damaged too much.

The politics regarding Hungry tubers among all known nations is similar – they must be completely eradicated. Unfortunately, Monstrologists still don’t know how exactly the seeds spread, making it impossible to find new Hungry tubers before they attack a humanoid for the first time.
The only sure way to survive the encounter with a Hungry tuber is to either get out of Vine-maw’s reach, or by damaging it enough until it is no longer able to cause harm. But for as long as the tuber lives, damaged or missing Vine-maws will be restored within weeks. That’s why eradication of Hungry tubers is always a difficult and costly operation. The tuber has to be partially dug out and pierced to release the digestive juice. An exposed wound like that leads to the tuber withering and dying for good.

Following the Night-rule, during specific hours of night Hungry tuber is completely inactive and wouldn’t attack even if stepped upon.