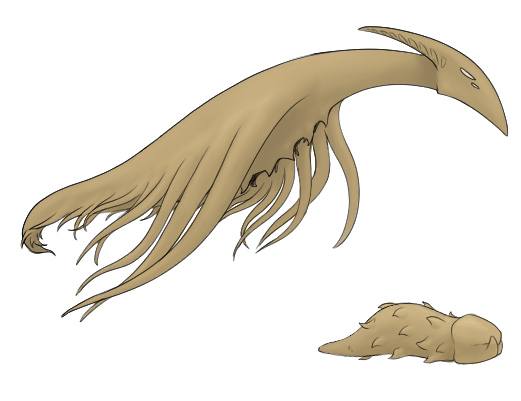 General information and physiology
Tentawing is a very interesting P-type monster separated into two unique sub-species - Tentawing larva and Mature Tentawing. While for the rest of species being a larva only serves as transition stage in the creature’s lifespan, for Tentawings it is a fully self-sufficient sub-species which morphs into its next form only under very specific conditions.
Tentawing larva is a small, rat-sized creature with a set of short tentacles spread across its body and with powerful 3-fanged jaws, which help it to easily kill small-sized prey and to dig through soil and even grind stone. Larvae also produce special sticky goo, used for various purposes, mainly for construction of the hive.
Small but flexible body and the set of independently moving tentacles offer the larva excellent mobility and even allow it jump.

When the specific condition is met, Tentawing larva turns into Mature Tentawing - a large flying monster with slick snake-like body adorned with two rows of tentacles by its sides. Its belly has a gaping space which serves for transportation of victims. Inside of it grow tiny aromatic spores which emit a secretion with a strong sweet smell.
Mature Tentawings lose the ability to produce sticky goo and have comparably much weaker jaws armed with sharp teeth.

Both larva and mature Tentawing possesses weaker version of Senergy vision, but with a very high active range.

Area of habitat and diet
Tentawings live in colonies and build hives in almost any imaginable environment. However, they are most often met in deserts, rocky hills or at low tiers of mountains, and much less frequently in swamps and jungles due to their distaste of excessive moisture.
There are two types of these colonies:
- Dormant Tentawing colony, which consists exclusively of larvae. They dig and build countless tunnels underground or within the mountains, lay new egg, gather food and die generation after generation, remaining mostly unnoticed by the outside world.
- Active Tentawing colony is formed out of a dormant colony when it obtains at least one mature Tentawing. Every larva within it now works for the production of new mature Tentawings. This process usually leads to heavy consequences for the surrounding lands and humanoid settlements.
When a colony enters Active stage, larvae change the way they build the hive. Instead on narrow tunnels and small rooms underground, they begin to expand it in all directions, in order to make room for both mature Tentawings and for the captured humanoid victims.

Both larvae and mature Tentawings are predators. Larvae’s diet mostly consists of small mammals, large and small insects, worms, roots and other organic matter that they come across while digging through the earth or during outdoor hunting.
Mature Tentawing actively hunt larger prey, such as birds, small and medium-sized mammals, reptiles and fish. Neither larvae no adult Tentawings ever eat humanoids.

Reproduction method
Larvae are self-impregnating hermaphrodites who begin to periodically lay eggs after reaching certain age and to the rest of their days. The eggs are usually left all around the colony, glued to surfaces by the same goo that is used to construct the colony. The incubation period is surprisingly long for a creature of this size – up to three months. Plus, every larva can only produce a limited number of fertile eggs. After the limit has been reached, the larva begins to lay only infertile ones. Other larvae can sense the difference between fertile and infertile eggs, and treat the latter as an alternative source of food.
Numerous sneaky predators tend to invade these hives and steal the eggs, making no difference between fertile eggs and not. This natural process allows to keep the growth of a colony in check and in rare cases even leads to its eradication. To prevent that, elder larvae tend to lay their infertile eggs closer to the entrances to the hive, to serve as sacrificial distractions for the would-be intruders.

Mature Tentawings are created when a Tentawing larva manages to sneak inside a humanoid female. Whenever that happens, the vaginal tunnel is blocked by the sticky goo, which prevents forced extraction of the invader while it produces an intense alchemical reagent and forces monster pregnancy within the woman’s womb. For the next fifteen minutes the larva goes through transformation, accompanied by orgasmic frenzy for the victim and a colossal amount of Senergy consumed by the larva. The larva transforms into a miniature version of its mature form and when it’s ready, it slips out and escapes, using the newly obtained ability of natural levitation.

Hunting method
It always begins the same way. Tentawing larvae who travel outside of its hive in search for food accidently find a humanoid settlement or an adventurers’ camp. Some lady in it happens to wear little protection between her legs. Larva finds her via its Senergy sense and silently approaches her crotch. When close enough, it rushes forth and squeezes its way inside.
If the process of transformation manages to go undisturbed and the newly hatched Tentawing escapes, it will spend many days restlessly hunting and consuming as much food as possible, growing in size and power. The extracted Senergy is used to accelerate organic growth of the creature, allowing it to reach massive size in a relatively short period of time.
A mature Tentawing born this way always remembers the location of its home colony and once it grows large enough, it begins hunting other humanoid females, to capture them and to deliver to the colony.

Perfectly equipped for this, Tentawing tracks down a fitting prey from great height, swoops down and grabs her with its numerous tentacles. Once the victim is successfully disarmed and immobilized, she gets stuffed face-forward into the gaping space on the monster’s belly. The aromatic spores within it produce a strong hibernating drug that puts the victim into a state of deep sleep.
This allows the monster to transport the victim without further resistance and upon reaching the hive, gives larvae enough time to build bonds around her. 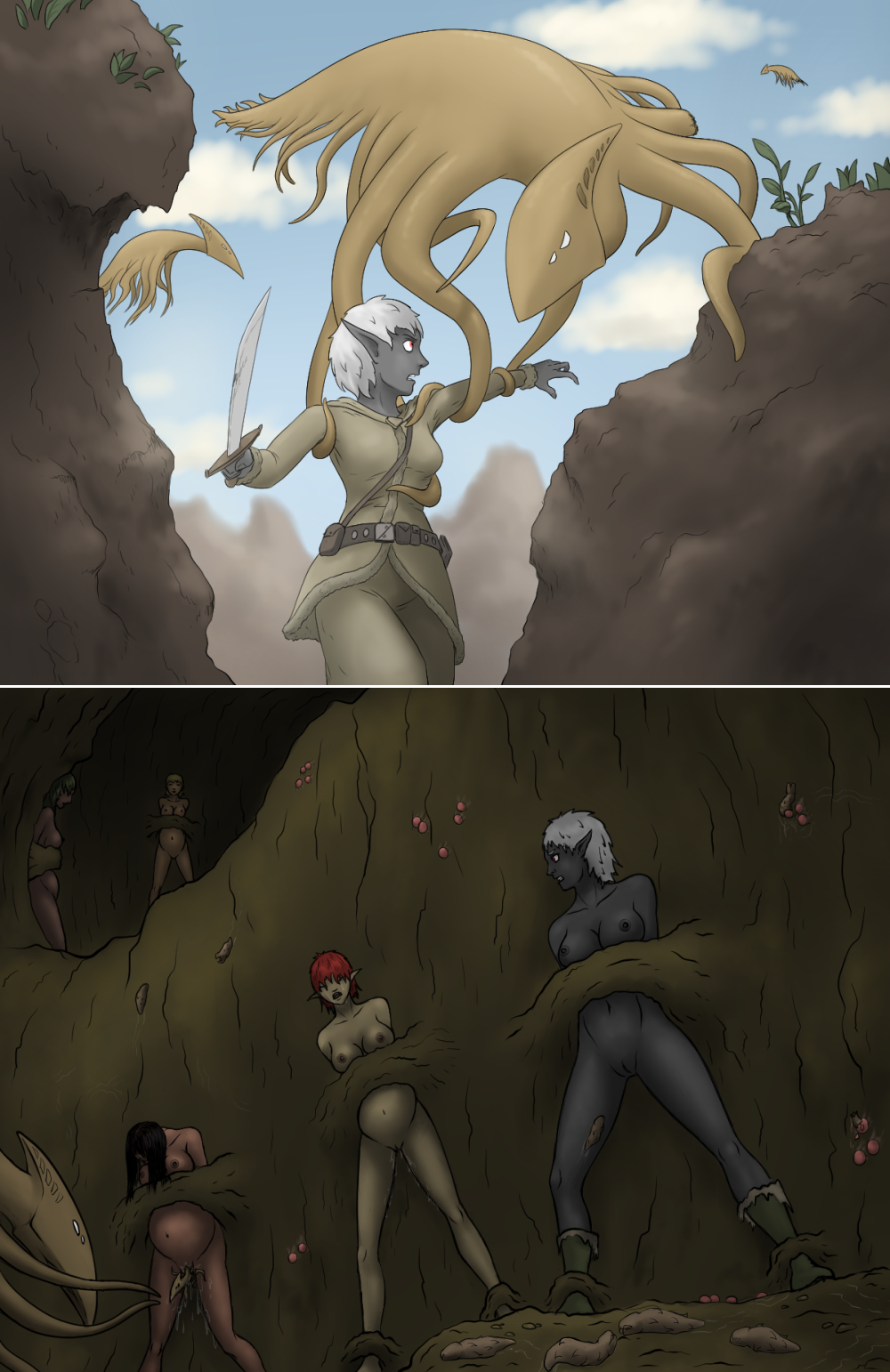 Once the victim wakes up, larvae, one by one would enter her vagina to trigger the transformation. The worst part about this scenario, and the reason why this monster has such high threat level, is that Tentawings never allow their victims to escape. They would keep using them for transformations, creating more and more mature Tentawings, each able and willing to seek more and more victims for the hive.
Existing in almost constant sexual strain, victims are given short breaks in between the transformations and are force-fed infertile eggs by the larvae. This allows the monster to keep the victims alive for as long as they are needed.

If left to fester for too long, a Tentawing hive would eventually reach so called Eclipse stage. The difference because very long incubation of the eggs and quick transformation of larvae leads to an inevitable situation where no more larvae remain in the entire colony. When that happens, swarms of mature Tentawings abandon the hive and captured women behind, spreading in all directions in search of fitting places for new colonies.
When a mature Tentawing finds a fitting place, it sits on the ground and falls into a lethal hibernation. Its insides transform into a set of fertile eggs, wrapped into a sturdy fleshy cocoon. By the time larvae hatch from them, the body of the mature Tentawing withers away or is eaten by predators. The walls of the cocoon are too sturdy for most predators to bite through. The newly born larvae would proceed to dig into the ground and will kickstart a new Dormant colony.
This is the only time a mature Tentawing is able to produce offsprings. It is still unknown why the lethal hibernation is triggered only after the Eclipse stage. If a mature Tentawing is killed at any other time, its dead body would not go through any transformations.

Usefulness to humanoids
Despite being P-type monsters, Tentawings are hated and hunted across the continent. Of all P-type monsters they treat their captured victims the worst, never letting them escape and leaving them to die of starvation during the Eclipse stage.
Whenever a mature Tentawing is spotted, responsible authorities prioritize mobilization of forces needed to track down and to eradicate the Active Tentawing hive. Same fate awaits any Dormant Tentawing hives, but unfortunately those are much harder to find.