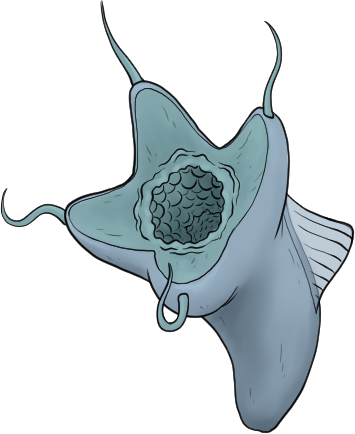 General information and physiology
Small, quick and harmless water creature, sucker-eel is a very unusual representative of the P-type monster family. Shaped like a sea cucumber, this hybrid of a slug and fish has no eyes and fully relies on sonar-based hearing. Its flesh is soft and provides little protection from predators. Its mouth is made of four boneless jaws, each containing thin retractable tentacles.

Area of habitat and diet
These creatures inhabit many fresh-water rivers, ponds and lakes of Karandia. The population grows significantly higher in proximity of humanoid settlements.
Sucker-eels don’t eat anything larger than aquatic insects. While swimming they keep their mouth partially open and filter the water through their bodies, consuming micro-organisms and microflora in the process. Thanks to their activity, any water inhabited by sucker-eels is always cleaner than anywhere else.

Reproduction method
Every Sucker-eel is a female and they use sperm of humanoids for reproduction. And unlike many P-type monsters with similar goals who chase or ambush their victims, taking them by force or through various chemical influences, Sucker-eels use fully consensual method instead – they give men exactly what they want.
An intercourse happens only once in sucker-eel’s life and within minutes after it ends the creature dies and its body turns into a container of quickly forming eggs. In two weeks the membrane of the container bursts open, giving way to almost a hundred young sucker-eels.

Monstrologists tried to figure out how sucker-eels survive in areas without any humanoid presence, and the answer has been found only recently. When numerous sucker-eels die within a body of water without being impregnated by humanoids, their bodies are destroyed in a different way and cause a large influx of microscopic pieces to fill the water around them. Very large consumption of such pieces by last remaining sucker-eels trigger a special defensive mechanism within them. It causes their bodies self-impregnate and turn into an egg-filled cocoon upon death, but instead of hatching in short time, it would instead fall into hibernation and hatch several years later. The process may repeat itself countless times until the humanoid insemination is available once again.

Hunting method
When sucker-eel’s relatively short life comes to an end (From 6 to 9 months), the monster’s body goes through a massive transformation – no longer necessary organs transform into sort orb-like formations and spread to the sides of the monster’ insides, turning its mouth into a body-long hole. After the transformation is complete, the sucker-eel can no longer eat and will live for only 2 days, using accumulated nutrients to sustain itself. During these two days it emerges above the water surface for the last time and begins emitting a specific sound, which can only be heard by humanoid men at several hundred-meter distance.

When the sucker-eel is found, all it takes to trigger the interaction is to pull down pants – the sight of exposed penis gives the monster the signal to action. The four thin tentacles within the monster’s jaws exist just for this moment – they shoot out at two-meter distance, wrapping themselves around the humanoid’s waist and pulling the rest of the body towards it. The monster literally gets itself penetrated, swallowing the male organ whole with its vagina-shaped mouth.

This is when the man can just sit down and relax – the sucker-eel does everything by itself. Stimulation of the penis is performed through stretching of the entire monster’s body while the transformed organs within the mouth emit subtle energetic impulses into the humanoid’s skin. It ends with the man’s orgasm when his semen is collected in the special chamber in the end of the sucker-eel’s body.
Once the desired substance is gathered the monster detaches itself from the man and jumps back into the water. 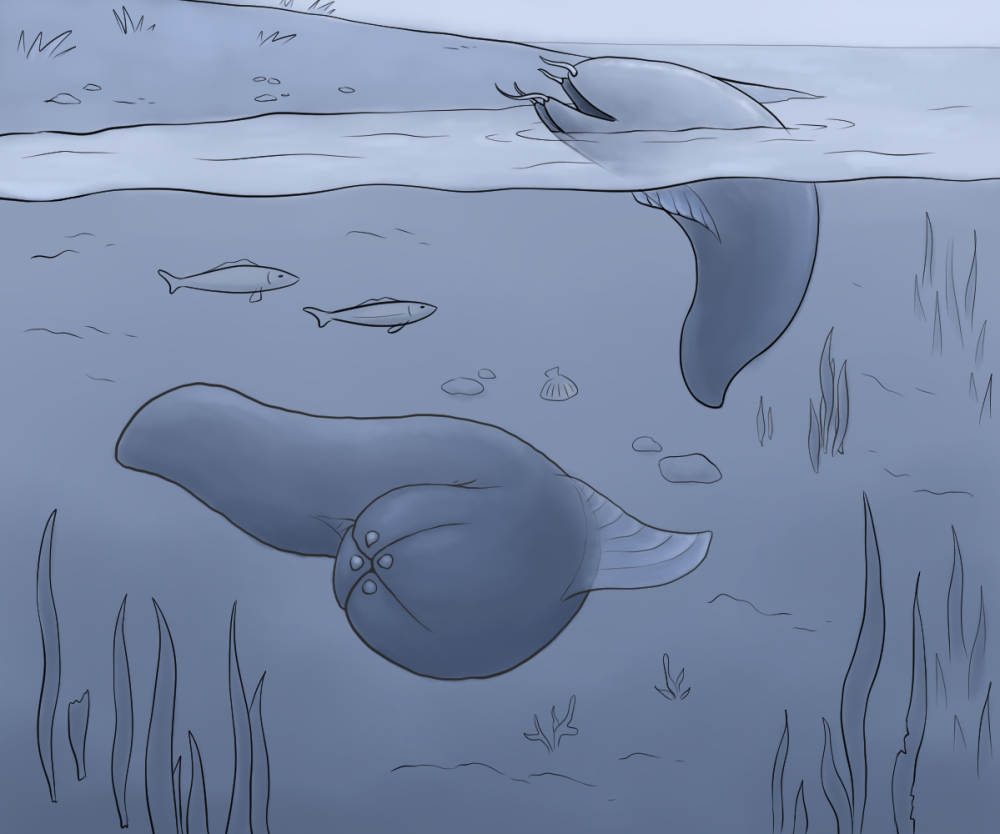 Usefulness to humanoids
The more sucker-eels dwell in the water, the cleaner the water becomes. That’s why this creature, similar to Reedler, is considered a highly valuable neighbor by settlement dwellers. The meat of a sucker-eel is very bitter no matter how you cook it so there is no point in hunting it. Sucker-eel is the only P-type monster who provides a unique Gift of nature that applies only to male humanoids – Monstrous load.
According to the latest public poll by monstrologists, in large cities every tenth man tried a sucker-eel at least once, in smaller towns in villages this percentage much higher. Some men enjoy the experience so much that they make it their hobby to seek new encounters. The most hardcore fans even claim that sucker-eels are better than real woman, but of course it is just an opinion.
Numbers of this poll should not be considered as factual.