General information and physiology
Sklug is a large slug monster, known for incredible sturdiness and unpredictable behavior. Its slime-soaked skin is thick and highly resistant to fire, slashing and piercing damage, and has a very strong regenerative ability. Striking weapons are pretty much useless against it. Sklug can grow new chunks of missing or damaged flesh within minutes after getting wounded. The only way to kill sklug is to deal massive amount of damage to bypass the protective layer of skin and to damage internal organs in the head area.
On the bottom of the frontal side of its body Sklug has a set of eight spitting tubes. This is the monster’s primary offensive and defensive mechanism. Of all senses Sklug relies the most on smell and sharp eyesight.
Powerful senergy vision allows it to spot potential prey from a relatively far distance.


Area of habitat and diet
Sklugs can be met anywhere in Karandia except for very high mountains and dry deserts. Sometimes it even finds its way into the upper levels of the Underworld. These creatures lead a nomadic liestyle and rarely stop somewhere for a long period of time. They are not afraid of groups of people, of predators and even to approach large settlements. Finding a Sklug slithering through the main street of a large city is not an uncommon occurrence. It is as if the creature doesn’t know what it wants and is not afraid of anything or anyone. It just doesn’t care.

Sklug eats anything it comes across - flora, large insects, dead or alive animals, people. While the monster is very slow and monotonous in the way it moves, its digestion system works surprisingly fast. Sklug can swallow and digest a creature within half a minute, including bones and even some non-organic matter. However, Sklug it also very good as preserving energy, that’s why it doesn’t need to eat often.

Reproduction method
Sklugs are gender-flipping hermaphrodites with uniquely shaped male and female organs hidden within their bodies. They can impregnate themselves for a slow viviparous pregnancy, or can use a humanoid female for similar but much faster result.
You can't call Sklugs good or bad parents because they don't do parenting at all. After the newborn Sklug is born, it belongs to itself and can do whatever it wants. The laziness and lack of any parental responsibility serves as main factor of Sklug population control. Most young Sklugs fall prey to predators, and only a small number of them reaches age and size where they no longer have any natural enemies.

Hunting method
The P-type classification is well earned by this monster, but even in this regard its behavior is grossly inconsistent. It interacts exclusively with females, either through extraction of Senergy or through optional impregnation.
But whether it wants to do it or not - is impossible to predict. You may get naked and lay down before the monster and it will just slide by or even over you, not paying attention. Or it can spot a fully clothed woman from a distant hill and charge her at its maximum (Not very fast) speed. The only sure way to attract Sklug’s attention is to directly attack it.

Whenever Sklug gains interest in a humanoid female, it can chase her for hours unless she manages to get out of its Senergy vision radius. But if Sklug manages to get close enough, it wraps up the frontal part of its body, exposing two rows of pipe-like protrusions and shoots out sprays of bright-green arousing toxin in a cone in front of it. Its effect is instant and triggers once the toxin touches exposed skin of the victim. The spit distance can reach five meters.
Any creature affected by this toxin begins to experience strong sexual tension of their genitals, which keeps rising with every passing second. One spray is enough to put most victims down on their knees. Only the most determined and resilient warriors can still fight through sheer power of will, but even they can’t resist second or third spray, considering that it takes only a few seconds for Sklug to recharge its weapon.
Once afflicted by Sklug's toxin, the victim can no longer flee or fight back, as the rational part of her mind gets completely overtaken by primitive lust. Her vaginal arousal grows to such intense degree that she can no longer resist the urge to get a release and tries to masturbate in attempt to reach orgasm as soon as possible.

Unfortunately for her (or fortunately, depends how you view it) the release will not come with just one orgasm. The toxin also applies the gift of nature Recharging, which significantly shortens the recharge period between orgasms.
While the victim is rendered helpless and vulnerable, Sklug approaches her and opens wide its toothless maw. Long, flexible tongue wraps around victim's frame and pulls her in.
Sklug takes its time to swallow the victim. Slowly but steadily tongue pushes the her down the threat, while she is helpless, shivering from waves of sexual pleasure rolling through her body. The long, slippery throat tunnel is not pitch dark, as Sklug's body is partially transparent. Through the tight tunnel of the monster's threat, the victim reaches the stomach where she will be held for a significant period of time. Skin-breathing gift of nature saves the victim’s from suffocation. The monster keeps covering the victim in the arousing toxin even here through special internal valves.
This is when another very interesting chemical reaction takes place. Normally if a creature gets into monster's stomach, it gets quickly digested. In this situation, however, the arousing toxin mixes with digestive juice and completely nullifies its digestive capabilities and smell. For as long as arousing toxin is provided, the victim is safe from digestion and any form of damage.

This is another situation where Sklug shows its unpredictable nature - once the victim is swallowed by this monster, 3 possible outcomes await her:

1. the victim will be held inside the monster's stomach for a large period of time from two to five hours and will be eventually ejected out by the monster and left alone. Sklug doesn’t always get rid of the victim after her body is completely exhausted and may keep her inside just because it wants to. Or… because it forgets to get rid of her.

2. A lethal end. Out of hunger or simply out of spite, the monster may choose to eat the victim instead of letting her go. This is done by simply closing the valve that provide arousing toxin.
Once the nullifying reaction stops, digestive juice regains its destructive capability and dissolves the victim's body within half a minute. This horrific event happened numerous times during early, highly unethical monstrologists' experiments. After a while scientists began hiring prostitutes or poor folk to participate instead of their own assistants. Surely without telling them of the possible danger.

The good news is that this outcome occurs extremely rare and it is possible to lower the chance of it even more by feeding Sklug prior to woman's involvement. And yet, even after being well fed, in 1 case out of 70 Sklug did digest the victim anyway.
Surprisingly enough, the aggression and damage the victim may’ve caused the monster before she is swallowed does not affect the chances of this outcome.

3. Despite having no need in partners for reproduction, sklugs often use swallowed humanoid females as hosts for their offsprings.
Impregnation performed by Sklug is a fascinating process to observe. Everything happens within just half an hour, from impregnation itself to the birth, all while victims remains inside the monster's stomach.

First Sklug inserts its penis inside the woman, reaching all the way into her womb. Sklug's penis is nothing like any other - it is hollow and holds a rather thick inter-penis tunnel, which can be blocked from both ends. Once the penis is deep inside, it blooms like a flower, spreading elastic edges of the head and locking itself inside uterus, while two internal Dividers block the inter-penis canal to prevent fluids from flowing out.
When this operation is done, sklug's semen is sent through semen cord into the womb. When newly created Sklug is ready, dividers open up, the child gets sucked out through the inter-penis tunnel and is pushed outside the grown-up sklug's body. 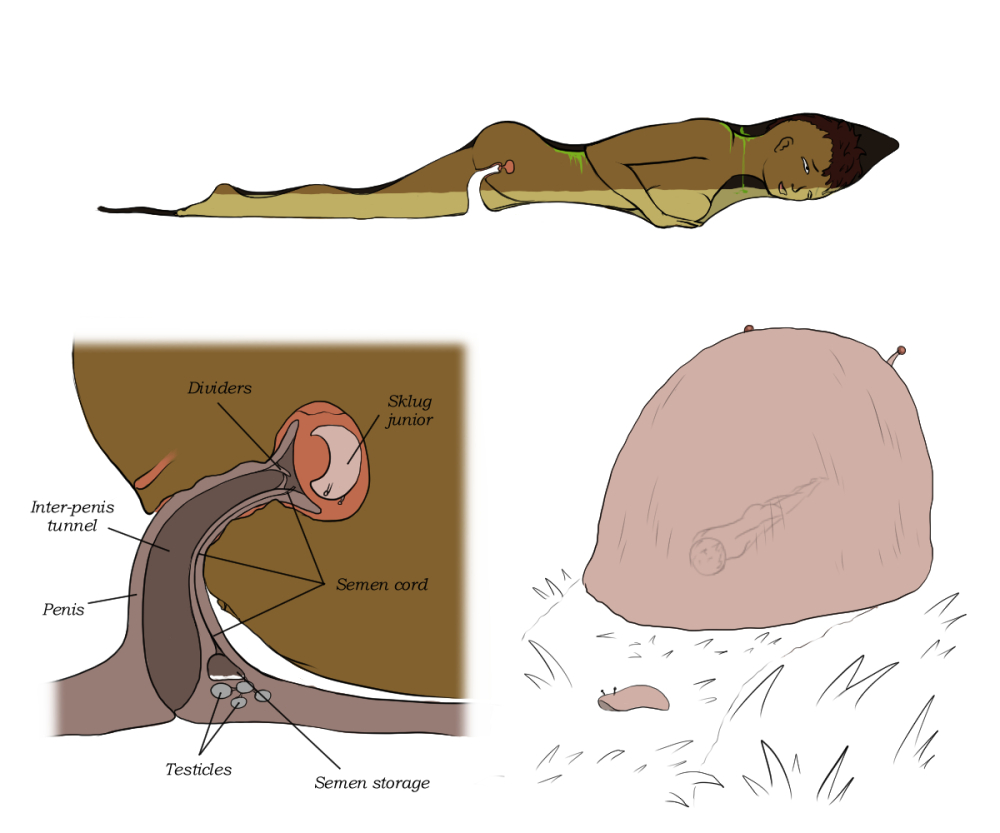 Usefulness to humanoids
Sklugs are often feared and avoided because of their unpredictability. Even the argent Gift of nature hunters tend to avoid them, despite this monster offering 4 at once. Whenever a Sklug gets into a village or settlement without strong warriors or mages who could defeat it, it is usually just left alone to do what it wants. Gladly, because Sklugs never stop in one spot for long, it eventually leaves.
The flesh of Sklug is not eatable. A special organ within the monster, responsible for its high regenerative abilities, can be used to produce highly effective healing potions. Finding this small organ within the mountain of flesh is not an easy task, not to mention how dirty and nasty of a job it can be. For these reasons the organ has a high price and demand on the market.
The arousing toxin loses most of its potency after the monster’s death. It can be gathered and used as a reagent for effective “love” potions or applied in its raw form for a significantly weaker effect.

Some savage tribes in Idonian are known for a peculiar rite of initiation, when female warriors and huntresses track down Sklugs and attack them. The rite is considered successfully passed if the warrior either manages to kill the monster or survives the visit into its stomach.
edit delete