General information and physiology
Plummeter vine, also often called Green bell, is a parasitic plant that dwells in the high sections of trees, wrapping itself around thick branches and sprouting roots through and under the bark. The body of this creature consists of thin roots, a seed-bulge, strong and flexible stem, several large leaves and a bell-like formation on the end of the stem. Inside the bell can be found a black organic membrane and a set of thin, flexible vines. 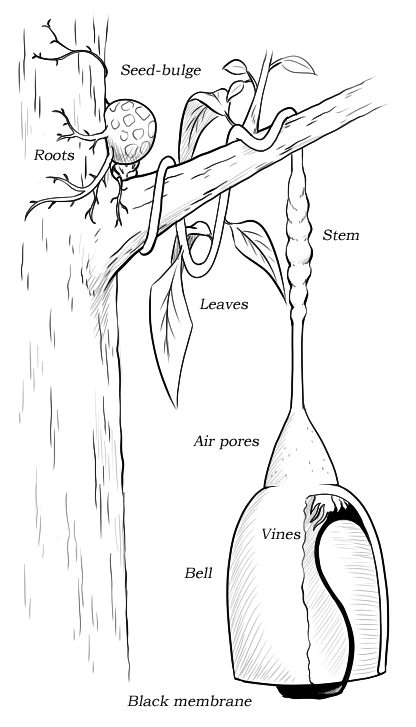 Area of habitat and diet
Plummeter vine is widely spread in warm swamps and jungles all over Karandia and islands surrounding it. Most often these plants can be found in tight clusters, covering several neighboring trees.
Beneath the trees can always be found leafless bushes of pink berries.
The parasitic nature of the plant comes from the way it sustains itself. Thin but sturdy roots slowly drill under the bark and deep into the trunk of a tree, feeding on nutrients from within it.
Photosynthesis also plays a role - large leaves of the monster equally enjoy direct and indirect sunlight.
Senergy serves Plummeter vine as an accelerator for both number of seeds and their speed of their growth.


Reproduction method
Throughout its long life Plummeter vine slowly generates around a dozen of seeds within the special seed-bulge. Once the time comes, the bulge pops and shoots the seeds into different directions. The seeds have numerous hook-like branches and once launched, they have to catch branches of near-by trees. If succeeded, the seed would slowly make its way closer to the main trunk of the tree. Upon reaching it the seed digs roots into the bark, claiming the spot as its permanent home.

Seeds that miss the trees and fall on the ground turn into an entirely different plant – Pinberry bushes. These bushes are infertile but continuously produce a large number of sweet berries with strong aroma, highly alluring to humanoids.
The seeds grow with the plant from the very start, and once popped, the seed-bulge can no longer produce new seeds. After that, Plummeter vine would continue living for only a week longer before withering and falling off the tree.
Because of its parasitic life-style, Plummeter vines cause severe damage to trees that they inhabit. It’s not uncommon for the trees to die before parasite reaches the end of its life.

Hunting method
Pinberry bushes serve a crucial role in Plummeter vine’s hunts, as an alluring bait. When a victim approaches the Pinberry bushes to collect the berries, or is simply passing too close to the tree where it grows, the monster’s stem quickly stretches, throwing the green bell on top of the target.

During the attack the black membrane sprouting outwards several meters before it reaches the ground. It spreads so wide, that it can easily cover the victim whole. The membrane contracts and seals the victim into a tight cocoon. Plummeter vine lifts the bell high above the ground where the Senergy extraction takes place.

Being captured by a Plummeter vine means to stay trapped inside the membrane for a very long time, sometimes up to an hour. While inside, the victim has access to air through tiny pores in the upper section of the membrane. It doesn't matter if the victim is naked or fully clothes - the monster doesn't need to undress them to get what it needs.
Thin vines, hidden in the root of the membrane sneak under the victim’s clothes and reach their sex organs. These vines slip inside vagina or wrap around the penis, acting for the entire time as Senergy extractors.
Once the vines are at their spots, the membrane itself starts sending stimulating signals right through non organic matter into the victim’s body, triggering strong arousing reaction. The intensity of the signals rises as time passes, to the point when no person can withhold an orgasm.
The only way to get out of the monster’s trap - is to satisfy its hunger. The more Senergy it receives, the more the stem stretches towards the ground. Damaging the Plummeter vine from both inside or outside while it holds the prey high above the air is the worst decision possible, as it would not hesitate releasing the prey while they’re still too high to survive the fall.
Once the bell reaches the ground, the membrane loosens its grip, allowing the victim to slip away.

Usefulness to humanoids
Plummeter vine is one of the rare P-type monsters who hunts both male and female humanoid. But apart of the chance to obtain valuable Gifts of nature, there is not much humanoids get from these monsters.
Pinberries are a delicacy with a strong and sweet taste, resembling an interesting mix between raspberry and vanillin. Professional gatherers of these berries often resort to a very simple tactic, which involves one of the party members to get intentionally captured by the Plummeter vine, while the rest safely gather all available berries underneath.

An even more advanced technique based of voluntary surrender to this plant, is to track down the moment when its seed-bulge explodes and to collect the falling seeds before they have a chance to burrow. This method allows creation of artificial Plummeter vine farms, which can be found in Ik’sumar, Avora, Inginia and several counties of Northern Dornia.
edit delete