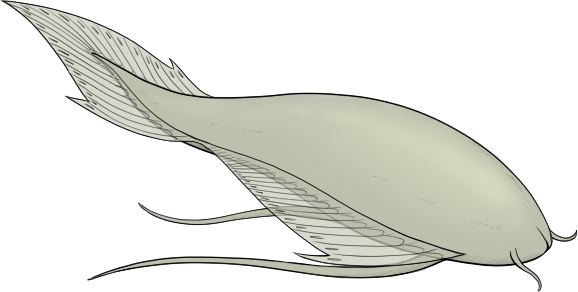 General information and physiology
Jellyslime is a large but fragile fish-like jelly creature. Its thick partly transparent skin covers a large reservoir of mucky slime-like mass, which serves numerous purposes, from performing every internal organ role to reproduction. The older the monster grows the thicker its skin gets, but if the jelly reservoir is pierced just once, the skin would not be able to regenerate in time and the slime would flow out. Any such wound is enough to killing the creature.

Area of habitat and diet
Commonly met in the seas and oceans around the continent, this creature spends most of its life swimming not far from the surface, rarely diving deep. Increased number of Jellyslimes should always be expected around port cities and inhabited isles, where the population of humanoids is high.
Photosynthesis plays the major role in sustaining the Jellyslime, forcing it to live close to the surface. If the creature loses access to direct sunlight for a prolonged period of time, for example during storms, it can consume fish, simple jellies and plankton with its small mouth.


Reproduction method
Jellyslime are self-contained hermaphrodites who become fertile after reaching certain age and size. This is not an easy task for them, as most Jellyslimes die during young age, becoming food to numerous aquatic predators. The longer the monster lives and grows in size, the lower the number of its enemies becomes. Once the monster reaches maturity, it would begin giving birth to countless offsprings on a regular basis all year long. Fully formed but tiny, young Jellyslimes are born within the slime and are pushed out through special valve near the tail.

Hunting method
Despite having a fragile body, Jellyslime doesn’t mind risking when it comes to the humanoid female hunt. The hunting technique is nothing mind blowing – it simply finds crowded areas and waits for a fitting victim to enter water far enough. Thanks to the squashed shape of its body, Jellyslime is able to approach the shore dangerously close and snatch victims at waist-tall depth. Despite its size, partial transparency and dirt-colored slime allow the monster to blend with the pattern of the sea-floor.
Once the fitting victim gets within its grasp, the monster grabs her with its long, strong tentacles, drags under the water and swims away from the shore.

The initial moment of the hunt often feels the most unpleasant to the victims. The element of surprise often renders them without a chance of taking a deep breath. This, however rarely led to any fatalities as it takes the monster only a few seconds to stuffs the victim into its “tentacle bed”.
Once there, the victim is safe from drowning even if she already managed to choke on sea water. Walls of the tentacle bed provide the Skin-breathing Gift of nature as soon as they touch bare skin of the victim.
While within the tentacle bed, victim’s head is oriented towards the frontal part of the bed where elastic edges close in, locking the her into a tight space to prevent escape and struggle.

While the victim's head is locked and she can breathe through her skin, dozens of tentacles provide intense sexual stimulation. Some invade her holes, continuously squirming in and out, the rest caress, massage and stimulate the rest of her body. It doesn’t take long for a Jellyslime to get satiated. After a couple of orgasms the victim is ejected out of the tentacle bed and abandoned.

Usefulness to humanoids
The body of a Jellyslime doesn’t provide anything useful to humanoids, that’s why they are not deemed worthy of neither hunting nor preservation.
However, the slime within it serves as a highly attractive food for fish. Crafty fishermen often use this knowledge and would wound the creature and spill the slime in order to attract more fish into their nets. Those who get used to this tactic but fail to find any Jellyslime for long enough time, often employ help from women they know or from prostitutes to act as bait. Needless to say, that such method doesn't works 100% of the time. Jellyslime is large but it’s an excellent swimmer and its partly transparent body provides solid camouflage against anyone who looks at the water from above the surface. Sometimes an unfortunate bait gets snatched by a grateful Jellyslime and the fishermen are left behind fooled and embarrassed.

The higher than usual threat level for this monster comes from the way it releases its victims. Snatched close to the shore, the victims are often released on a significant distant away from land. Inability to swim, physical weakness and sea predators occasionally claim lives of Jellysmile’s victims.
edit delete