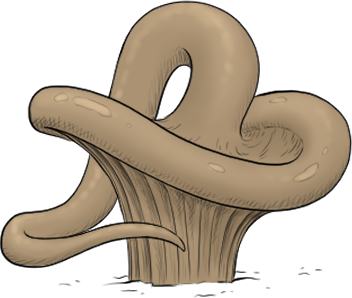 General information and physiology
Rain grabber is one of the few P-type mushroom monsters. While its main body resembles a thin worm that never appears on the surface, it can grow mushrooms all year long but only during and after rain. Higher-than-usual amount of moisture in the soil is needed for the mushrooms to sprout.
The mushrooms themselves have a very short life spam – they reach full form in just a couple of hours, but dry out within 4-5 days after the rain is over.

The flesh of the rain grabber mushroom is thick and stretchy. The stamp is hidden below the ground level and contains a long, retractable tentacle (Grabber) inside. The cap has a hole on the top and its upper surface and sides are rounded and extremely slippery. At any moment both stamp and the cap can pop out of the ground and turns themselves in any direction.
The flesh on the inside of the stamp differs from the rest and has some shapeshifting qualities. It is used to bond, undress and penetrate the captured victim. 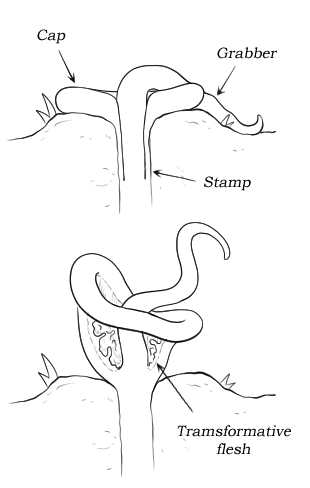 The monster does not have any form of Senergy tracking. Instead, similar to Black bloomer, it fully relies on seismic sense and can easily determine the species and gender of a creature that approaches it.
If it is mistaken, what tends to happen, and it catches a male humanoid, a child or an elderly, it usually just lets him go once the contact with bare skin is made.

A single Rain grabber can sprout up to 4-5 mushrooms at a time.

Area of habitat and diet
This creature is met in forests, jungles and plains of the Central and Southern parts of Karandia. Rarely they can be encountered in similar environments of the North, but never in deserts, highlands and mountains.
Senergy collected by the mushrooms serves the monster as powerful nutrient for a very long time. But even when the hunt brings no results or when the dry weather holds for too long, the main body of the creature can sustain itself by absorbing nutrients from the soil. It wouldn’t grow any mushrooms but while inactive, it can survive for years waiting for the next rain.

Reproduction method
Once in a while when the main body of the monster grows too long, halves of it split apart and live as two separate creatures. This process happens not more often than once a year.

Hunting method
When the mushroom grows to a certain size, the cap opens up and the grabber is thrown out on the ground to motionlessly rest and wait for a fitting prey to walk within its reach.
Most of the time the grabber wraps itself around the victim’s legs and simply pulls her into the cap feet first. The stamp stretches outwards to create extra space within it for the victim to fit.
Depending on the size difference between the mushroom and the victim, she might be restrained from her waist level to her neck. The mushroom never pulls the head in, as this would lead to the victim’s suffocation, and this monster does not provide any Gifts of nature that would solve such issue.

The flexible flesh forms differently sized tendrils, which simultaneously remove as much clothes as possible, provide additional bonds to keep the victim in place, and of course stimulate and penetrate her. Apart of the transparent slime produced by the mushroom, that serves as a lubricant, the monster does not produce any more liquids during the act and does not ejaculate. When Senergy-rich fluids are extracted from the victim, they are absorbed by the inner walls of the cap, satiating the main body of the monster. It usually takes two-three rounds to fully satisfy it. When that happens, the grip of the grabber and the cap is loosened and the victim is allowed to slip away.

Usefulness to humanoids
Because of short-living nature of Rain grabber’s mushrooms and the slow reproduction of the main body, this monster is rarely targeted by monster hunters.
The mushroom’s flesh, when chopped and preserved in its prime condition, can be used as food and as a reagent for healing balms. The central tentacle, which has an even more dense flesh structure, is considered a delicacy when cooked correctly. But unfortunately, few know how to do it, so it’s usually just left behind.

Fun fact
Unlike many P-type monsters Rain grabber does not have any sense of cautiousness during its hunt. It does not bother to bind the victim’s hands and does not try to remove any tools or weapons she may carry. While the lower half of the victim’s body is bound, the upper half is allowed to act freely. If the victim is barehanded and does not know any spells, she would have a hard time to set herself free due to the slippery surface of the cap. But if she has weapons, she can easily carve her way out.
The mushroom is void of any nerves and the monster is not afraid to lose it. New ones can be re-grown any time again.
edit delete