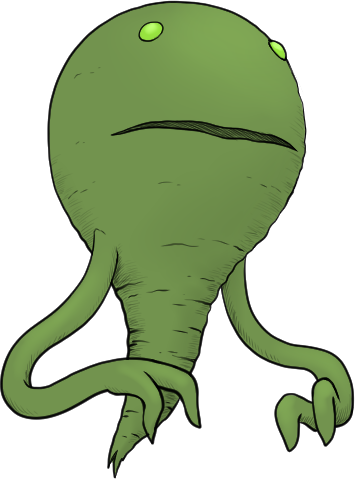 General information and physiology
Gorgemaw is a light, elastic and very stretchy slug form of life with a natural ability to levitate. Great eyesight with innate long-ranged Senergy vision ability helps it to easily find potential prey even when they are out of line of sight. Two long but surprisingly strong arms are used for grabbing and sending the victim into its maw.
The maw itself doesn’t have any teeth or tongue, and is used primarily for capturing prey and extraction of Senergy. The creature does have any throat or stomach. Instead, the monster feeds through a special needle hidden within its tail, which also can be used for self-defense.
Gorgemaw has a powerful but slow regeneration ability. It can regrow lost arms and chunks of flesh. All of its vital organs are stored in the back of its head.

Area of habitat and diet
This monster can be encountered anywhere in Karandia, but the chance to meet one is pretty low. Gorgemaws are very cautious and prefer to dwell in the deep parts of forests and jungles. They avoid settlements and groups of people and only attack lone prey.
This monster has a very specific diet of tree sap. Using a powerful needle it can pierce through even the hardest bark and spend hours, even days motionlessly collecting the sap.
Senergy serves Gorgemaw as an alternative form of nourishment. The monster’s body structure is perfectly equipped for its extraction and the monster always prioritizes feeding off humanoid females over tree sap.

Reproduction method
Gorgemaw is genderless and uses a very rare form of reproduction – cloning. Upon reaching certain age the monster finds a safe spot on a top of a tall tree and turns there into a cocoon. After several days of metamorphic processes within the cocoon, the monster's body splits into two or three separate beings. Newly born Gorgemaws are smaller in size and have to grow for several weeks before they can hunt.
The splitting happens approximately once a year, but can be greatly accelerated if the monster performed a successful Senergy hunt.

Hunting method
When Gorgemaw spots a fitting, lonely victim, it swoops at her from above or behind and grabs with its long, elastic, strong arms. If the prey carries weapons or luggage, the monster would try to get rid of them before proceeding. Gorgemaw then swallows the prey whole, stuffing her inside its stretchy maw. Once the prey is there, the monster's body begins to stretch and inflate, forming a balloon shape. The monster remains mobile even when the Senergy extraction begins.
The inside walls of Gorgemaw's sack contains numerous bulges, each able to stretch and grow, turning into tentacles which can move on their own. These tentacles are used to restrain the victim and to extract Senergy through sexual stimulation and penetration. The more the victim struggles - the more tentacles would form to keep her bound.

Tiny pores of the sack extract a special gas without smell. It is harmeless and unnoticeable to the prey but is highly destructive to most non-organic matters. In less than a minute it can corrode and grindsinto dust armor and clothes of the prey. This gas is only used when Senergy extraction appears ineffective to the monster due to excessive clothing.

It usually takes the victim several orgasms to fully satiate Gorgemaw. After that the monster simply spits her out and flies away. While Gorgemaw does not directly harm its prey, the monster's activity may lead to casualties due to the fact that the victim is often left behind naked and unarmed. Very often experienced adventurers, who get ambushed by Gorgemaw and lose the struggle, intentionally drop their weapons and tools before getting stuffed inside the maw.
It is also unwise to try and attack Gorgemaw while it has a victim inside. When threatened by other humanoids or predators, the monster tends to fly away which would result in the victim getting released far from the spot where she has been captured.

Usefulness to humanoids
Gorgemaws are considered as nothing more than annoying pests. The monster’s skin can be used in crafting of armor and leather gear, however apart from extra stretchiness it doesn’t provide better protection than materials of similar type. Ironically, gear crafted out of Gorgemaw’s skin is not resistant to the gear-destroying gas immitted by a living monster. Absence of blood circulation and nutrients within it leaves it vulnerable to the unique effect of this gas.
Unfortunately, the cloth-destroying gas itself can’t be extracted from dead monsters, as it is not stored but generated by special glands within the monster’s body during the Senergy extraction procedure.
Gorgemaw can’t be domesticated.
edit delete