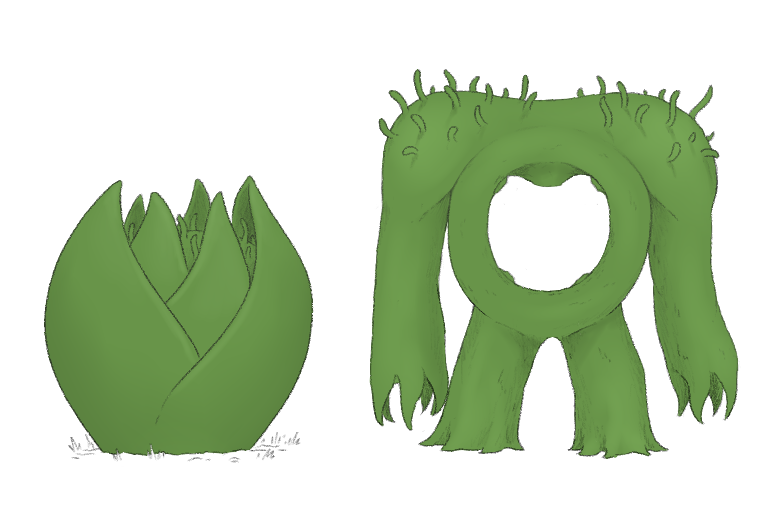 General information and physiology
Abducterror is considered one of the strangest P-type monsters in both its appearance and its unique role in nature. It belongs to the small section of dangerous P-type monsters, whose sexual encounters end poorly for the victim. In this case, such encounters simply never end.
This plant-based monster has a humanoid-like ring-shaped body with long, powerful limbs on the sides. Tendrils growing on its massive shoulders act as both eyes and strong Senergy sensors.
The monster has no bones, so its jointless massive legs and arms can twist and move in unpredictable directions. The arms contain hollow tunnels, connected with hollow cores inside the shoulder growths.

Within the sides of the ring-like body the monster contains special glands filled with potent toxin, which can be spewed into the center of the monster via special folds.
On the bottom of the inner ring the monster has retractable sexual organ, presented in form of penis-shaped tendril.

Abducterror feels no pain and has high regenerative ability, able to slowly grow back missing limbs and chunks of flesh. To effectively kill an Abducterror, one must destroy both cores within its shoulders. These cores perform multiple functions within the monster’s organism and are essential for its survival. However, the monster dies only if both are destroyed at once. As long as at least one remains undamaged, it can restore the other with time.

Life of an Abducterror consists of two stages. In its first stage the monster sits wrapped in a ball within a bud composed of hardened petals, which serve it as a protective shell. In this form the monster remains completely immobile while its Senergy sense is heightened. The bud has roots and allows the monster to feed on nutrients from the soil, prolonging its existence to up to a decade.

Second stage begins as soon as a humanoid female enters the monster’s Senergy sense radius. When that happens, Abducterror hatches from the bud, leaving its shell of petals behind, in order to capture the prey and to put her inside the hollow center of its body. Newly hatched Abducterror shows surprising speed and ferocity despite its impressive size. If the monster managed to catch the prey, she becomes part of the monster’s body and would serve it as permanent source of Senergy.
Abducterror has no mouth or digestive system, and after hatching from the bud, it can no longer return into it. That’s why if it fails to catch the prey within a day after hatching, it dies of starvation.

Abducterror possesses strong Senergy sense but not Senergy vision. That’s why the best way to avoid being captured is to get out of its sight and then to get as far away as possible from it. However, while doing this, female adventurers should always keep in mind that the monster would continue searching for a humanoid female even if it loses track of the original target. When that happens, Abducterrors typically run off into a random direction in search of any other fitting pray until its limited time runs out.


Area of habitat and diet
Abducterrors are relatively rare monsters which can be met in any areas of Karandia except deserts and high mountains. They can also be encountered on surrounding islands and even in the Underworld. The Underworld variant, due to limited space of its tunnels, typically doesn’t grow as large in size, and because of that is physically weaker. In distant past their primary prey were goblin females. Which, if one would venture into distant, forgotten parts of the Underworld, can sometimes still be found captured by this monster even now.

There is no strict pattern to each individual Abducterror’s territorial behavior. Some migrate and cover large distances, occasionally stopping at one place for a short time. Others remain within the same area where they’ve hatched their entire life.

After hatching and successfully capturing a humanoid female, Abducterror feeds exclusively on Senergy extracted from her.
However, because the humanoid female has no control over her body in captivity, it is Abducterror’s responsibility to keep her alive and fed. That’s why most of its free time from extraction of Senergy, Abducterror searches and collects specific fruits and mushrooms, which are delivered into a special Food storage near the core via arm canals, where they’re converted into nutritious substance and then fed to the captive. The entire process happens inside the monster’s body.


Reproduction method
Abducterror possessing a humanoid female slowly accumulates Senergy within the cores of its shoulders. When enough is gathered, small young buds begin to form within the core, and then pushed out through the tunnels of monster’s arms, emerging from the hole in the center of their palms.

These small buds sprout roots and would slowly grow in size. The hardened petals protect the forming body of young Abducterror and are fully sealed until it reaches maturity. Only when it reaches certain size, the tips of the petals open up, allowing the Senergy-sensitive tendrils to poke out and to tracking potential prey.

Hunting method
Abducterror’s hunting method is pretty straightforward. As soon as its Senergy sense catches scent of a fitting prey, the monster begins to actively search her. When she’s spotted, the Abducterror charges her and uses its long, strong and flexible arms to restrain her, ignoring presence of other people, environmental dangers or any other obstacles. The very survival of the monster depends on quickly capturing a female humanoid, that’s why it risks everything to get her.
If met with physical resistance, be it from the prey or surrounding creatures, Aducterror may engage in combat. By grabbing and swinging its massive arms it aims to disarm the prey, and can knock out or even kill her protectors.

A successfully restrained victim is placed against the inner opening of the main body, where special elastic folds catch and restrain her limbs. There are seven such folds in total. One for the head, four for arms and legs, and two acid-spitters on the sides.
While the victim’s limbs are being sucked into the body of the monster by the elastic folds, the acid is splashed all over her body. This extremely potent acid effortlessly destroys any non-organic matter, melting her clothes, armor and accessories that she wears. The only forms of matter it can’t melt are gold, silver and gems.
The toxin can be also distributed internally through special tiny canals into the pockets for victim’s head, hands and feet in order to destroy boots, gloves or helmet, if such pieces of clothes remain after the limbs are already locked within the monster’s body. In this case the dissolved material is absorbed by the monster’s flesh and removed slowly with the monster’s ‘sweat’.

When the victim is fully inserted into the monster, her face is exposed to special fumes which forcefully put her into a dream-like state. Those who at least once experienced Abducterror’s captivity and have been rescued, describe this state as a dream that switches between either melancholic abstract haziness and bright, extremely detailed lewd dreams.

This is explained by what happens to the body of the victim. While her mind resides within the dream-like state, any sexual interaction with her body results in a lewd dream, which synergizes sensation of her body with her mind. This results in the most effective Senergy production.
And while her body rests, the dream turns into an abstract, soothing haziness, which is meant to relax the victim’s mind and to prepare her for the next extraction.

The strangest side of Abducterror is that it doesn’t always sexually stimulates the prey by itself. On the contrary, it happens surprisingly rarely. Instead, Abducterror allows other P-type monsters to have their way with its victim, consuming large portion of produced Senergy as a tax.
This is where third unique ability of the shoulder tendrils shines. They can serve as Senergy sonars, turning tiny portions of Senergy extracted from the victim into signals which are sent out in a wide radius around Abducterror.
Some types of P-type monsters, especially those who possess strong Senergy sense themselves, can catch these signals and travel to Abducterror for an easy Senergy meal. Abducterror even allows use of its prey for egg-bearing purposes.
Senergy sonars are not always active. Abducterror uses them only when it feels its Senergy reserves running low.


Usefulness to humanoids
Because the captured victim’s torso is exposed to the environment for a prolonged period of time, apart from already vast number of Gifts of nature, Abducterror provides a unique one – Armored skin. This Gift of nature protects the precious skin of the victim not only from physical harm but also high and low temperatures. This is one of the few monsters who provides this extremely powerful Gift of nature, making it very rare and sought after.
Because of this, while Abducterrors are generally treated as a ‘destroy on sight’ menace, many wealthy Gift of nature enthusiasts pay fortunes to track down Unhatched Abducterror buds and to try and get this Gift of nature for themselves. The payment, of course, also goes to guards and mercenaries who are tasked with rescuing the customer from the monster’s grasp.
The potent clothes melting acid functions almost identically to the gas of Gorgemaw. But unlike gas, this acid can be extracted and stored after Abducterror’s death. However, the potency of it diminishes with time even when stored properly. The potency can be restored through complicated alchemical tempering, but few masters know how to work with this unique substance.
Abducterror’s flesh is unfit for consumption and this monster can’t be domesticated.


Fun facts
From everything known about Abducterrors it’s easy to assume that the only way to escape its captivity is to rely on someone else to save you. However, in rare cases an Abducterror may actually set the prey free if it finds a better one.
This fact alone raised the necessity of in-depth study of Senergy and its possible differences from one person to another. Such studies led to a theoretical concept known as “Senergy flavor”. Unfortunately, very few P-type monsters show any signs of interaction with it.
edit delete