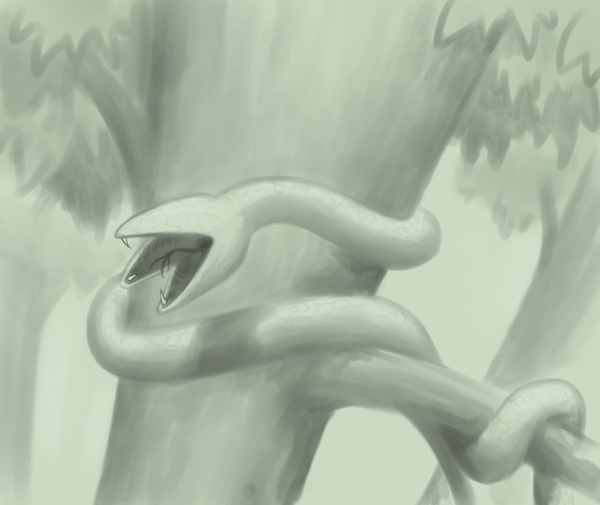 General information and physiology
Trifang is a snake with unique shape of its head. The skull consists of three evenly sized jaws, each armed with a single fang. The jaws open up in shape of a flower and are not attached to each other, allowing the snake to stretch apart its maw in order to swallow large creatures whole.
Trifang doesn’t have conventional eyes or ears. Instead, it relies on special sensors within jaws, which perform similar function by sending unique signals that analyzing the surrounding. These signals can’t be heard or detected by anyone but the Trifangs. By gathering various sources of information such as temperature, movement and air and magnetic field, Trifang’s brain creates a detailed picture of the surrounding in form of shapes and silhouettes. Such strange form of vision allows the snake to track down potential prey and to determine their size and strength. And while quality of the picture Trifang ‘sees’ is questionable, it functions well regardless of absence of light or any vision-obscuring factors such as fog or smoke.
When Trifang finds a potential prey, it lashes out and attempts to bite it in order to inject potent poison through its fangs.
Trifang’s poison affects nerve system and causes growing weakness and loss of orientation. After successfully biting the prey, Trifang tends to stay away and wait for the poison to have full effect, avoiding unnecessary risk of retaliation. Only when the victim is weakened enough, the snake approaches and swallows the it whole.

Trifang can live for many decades and never stops growing. Male Trifangs usually grow faster and larger than females.


Area of habitat and diet
Trifangs can be met in central and Sothern regions of Karandia. They lead solitude lives, but each gender of the creature behaves differently. Female Trifangs are highly territorial and rarely ever stray far from the area they inhabit. Most of the time they spend resting and hiding from dangers on trees, high-to-reach cliffs or within caves, abandoning their hideouts only to hunt. Male Trifangs are the entire opposite and lead a nomadic life style. They travel constantly and stop at one place for long only if they are wounded or if they’ve caught and swallowed someone so large that they’re unable to move freely.
Trifangs are carnivores and hunt anything they can kill and swallow. They start with small mammals, birds and inspects when they’re young, but the larger the snake grows, the more demanding its appetite becomes. Eventually every Trifang grows large enough to consider humanoids as potential preys too.


Reproduction method
When a male Trifang enters territory of a fertile Trifand female, they sense presence of each other through their unique signals. If the female Trifang isn’t currently pregnant or busy taking care of the eggs, she intensifies her signals, letting the male know that she’s up for the mating session. Once the female Trifang is impregnated, the male abandons her territory and continues its search for new partners.
Impregnated female lays several eggs in a hard-to-reach place where she would protect them until they hatch. However, once that happens, Trifang mother wouldn’t bother doing any parenting. From that point the hatchlings are expected to take care of themselves and to find their way out of their mother’s territory in the shortest time possible.


Interaction with humanoids
Trifangs pose danger to humanoids at any age. In order to avoid threats the young Trifangs tend to hide under dense foliage and to remain motionless when they sense presence of larger creatures. People often get bitten by getting too close to them without noticing. Trifang’s poison isn’t lethal but its strong effect can easily become the reason for other beasts and predators to have an easy time catching the unfortunate humanoid.
Adult Trifangs, those that grow large enough to consider humanoids a worthy prey, are much easier to spot from afar. But it doesn’t make them any less threatening, as when a mature Trifang is hungry, it would actively chase and attack any humanoid they spot. Gladly, they’re not very fast and even an untrained person has a high chance of successfully escaping from one.

Trifang’s poison can be extracted and stored, what makes it a valuable ingredient in alchemy. It can be used row and applied to weapons and arrows too, as its potency lowers only slightly after extraction.
Trifang’s skin is beloved by leatherworkers and serves as a fine component in armor crafting.


Fun fact
The main reason why Trifangs always live alone is that their unique signals affect not only the snake that sent them, but by every Trifang in the area. Presence of several Trifangs in the same area causes confusion and disorientation in the head of each snake. That’s why they always prefer to keep distance from each. Mating period is the only period of time when two snakes tolerate presence of each other.
edit delete

Potential defense: If you can work out how the Trifang communicates, you can broadcast gibberish, which will confuse it and drive it away.
edit delete reply
Darksh1ne 30th Dec 2022, 5:38 PM

True, this is possible. Although, this creature is not that dangerous to go so far
edit delete reply
Post a Comment