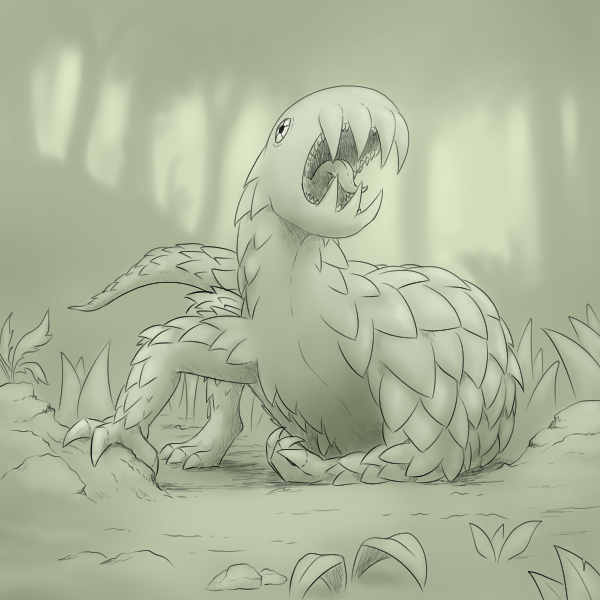 General information and physiology
This interesting creature possessing traits of both mammal and reptile. Flexible body almost fully covered in sturdy plates provides it with exceptional protection and allows it to travel in a unique way – by rolling. Using tail and limbs for control and speed-up, Rolly snapper uses this technique to escape threats and to chase and knock off-balance its prey.
Massive fang-like bones in front of its powerful maw can cause horrific wounds and are used to snap necks and tear off limbs and chunks of flesh.
The eyes of a Rolly snappers have a unique appearance. Their normal eyes are hidden under a transparent shell, which serves like a protective glass.


Area of habitat and diet
Rolly snapper is considered an exotic animal as their number is relatively low. Apart from a short period of nurturing the young, these creatures always live alone by themselves.
They can be met in prairies, forests and mountain areas all across Karandia. They are predators and hunt small and medium sized creatures, while also not shying away from picking leftovers of larger predators.


Reproduction method
Rolly snappers lay eggs that they carry around at all time in a special bag at their belly area. Their eggs have exceptionally thick and sturdy shell that protects them from cracking when the mother rolls and fights.
Because of its thickness, a baby Rolly snapper can’t crack it by itself. When it’s fully formed and begins to scratch on the surface, the parent has to crack the egg to open it. Otherwise the baby would die.
After their birth young Rolly snappers stay beside their mother for only a couple of month. After learning the basics of hunting and self-protection, they abandon her to live by themselves.


Interaction with humanoids
Rolly snappers are usually not aggressive to humanoids and rarely initiate an attack. Usually that happens when they starve or in a situation when the creature feels threatened and doesn’t have a clear rout to escape.
Domestication of Rolly snappers is impossible, as cooperation and loyalty are simply not part of their nature.
edit delete