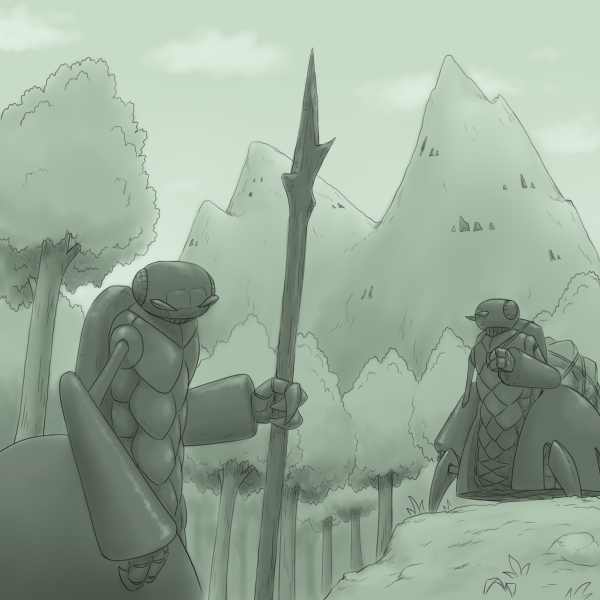 General information and physiology
Among monstrologists of Karandia for centuries continues one specific debate - should Skrogs be considered a humanoid race or not. These chitin-encased insectoid creatures of various size and shape exist on the border between humanity and animal kingdom.
On one hand their monstrous appearance and physiological traits are too different to ones of a humanoid. P-type monsters completely ignore Skrogs as potential preys as well.
The most damning factor lies in the so called special Scrog firefly. Since birth within every Skrog’s body resides a dormant colony of special fireflies. If a Skrog meets an untimely death, these fireflies hatch and leave its body to travel back to the hive where the Skrog was born in order to inform other Skrogs about the master’s death. This fact creates a strong bond between each Skrog and its colony, damaging the idea of Skrogs having personality and free will – the most essential traits for a creature to be considered a humanoid.

On the other side of the debate lie behavior and intellect displayed by Skrogs. Not only they can use tools and weapons, but they can craft their own, using unique materials and technologies. Weapons belonging to deceased humanoid adventurers, or taken away from trespassers often become blueprints for Skrogs’ own designs. This is why most of the weapons used by Skrogs have familiar shapes of axes, swords, pikes and clubs. Inspiration and adaptation of the most effective tools is a purely humanoid trait, even if more skeptical Monstrologists deem it as nothing but instinctive imitation.
Scrogs speak their own language, which can be learnt and understood by humanoids, making it possible to directly communicate with Skrogs. Unfortunately, Skrogs are unable to learn other languages themselves due to physiological limitations of their jaws and vocal cords.

Despite Skrog societies closely resembling ant colonies in their strict hierarchy and assigned roles, many Skrogs display signs of individuality and free will. It’s not uncommon for select Skrogs to completely deviate from their assigned role and to pursue their own interests and desires. However, most of the times a colony suppresses and punishes such behavior.

Most Skrogs can’t choose their role within the colony, as most of these roles are assigned to unique Skrog sub-species. Each sub-species has unique body structure and size, but all of them come from the same egg and the same larvae. Factors that decide what sub-species a larvae would morph into are unknown to Monstrologists and even Skrogs themselves. For a larvae to become either a queen or a worker – is a matter of pure chance.
The percentage of larvae becoming warriors and workers is overwhelmingly higher, but each colony eventually runs into a situation when there are too many unneeded queens and coordinators. Most colonies keep them as backups and only use them in case of something happening to the active queen or coordinator. But there are also those colonies who practice execution of the unwanted. Such colonies are rare and in case of the active queen’s unexpected demise, they face either imminent extinction or the necessity to merge into another colony. 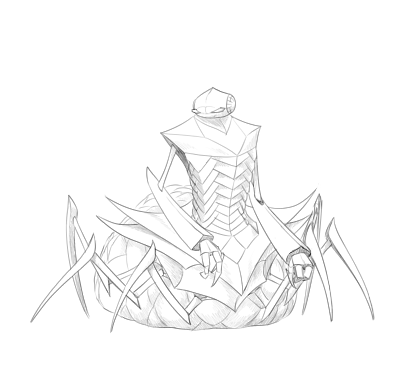 Queens are massive but rather helpless, especially during the mating period and pregnancy. Unlike ant queens, who are busy laying eggs their entire life, Skrog queens are not fertile all of the time. Periods of pregnancy last for a long period of time and lead to more than a hundred of eggs laid in one sitting. After that the queen enters a resting period of several months, during which she can’t become pregnant and can freely travel within or even outside of the Hive.
Some colonies use princesses as temporary egg-layers during such periods. However, to prevent overpopulation, Skrogs use this method mostly during difficult times, after a colony suffers great major losses in conflicts or other disastrous events. 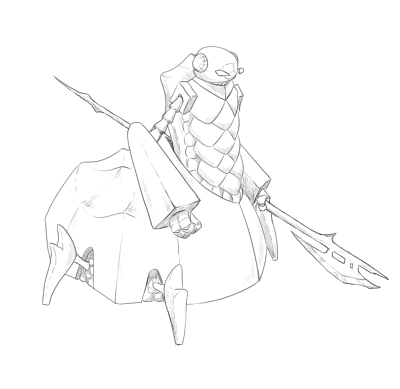 Surprisingly enough, the most valuable sub-species in every colony is not the queen, but the Skrog gladiators. These massive, powerful insectoids are the elite warriors and protectors of the hive. They have extraordinary learning capability and spend their entire lives honing their own combat skills and mentoring other Skrog warriors. Beware a Skrog gladiator who at least once in a lifetime receives a real combat experience.
Skrog gladiators rarely leave the proximity of the Hive. They don’t participate in regular patrols but they can be dispatched to investigate potential threatening activities within the surrounding lands.
Skrog gladiators serve as main inseminators of the queen and every single one of them is a male. 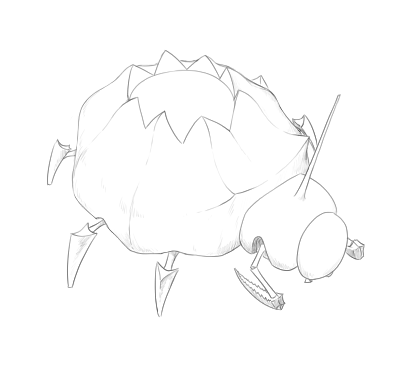 A unique, blind and barely mobile Skrog sub-species, adorned with a giant glowing organ on top of its spine. This glowing organ attracts Skrog fireflies. When fireflies of a dead Skrog reach it, they transfer their life force into it. By doing so fireflies die, but their lifeforce contains information of the direction and distance they’ve covered during their short lifetime. This allows the coordinator to calculate with precise accuracy where exactly the death of the Skrog took place.
Skrog coordinators are genderless and lack any kind of sexual organs. 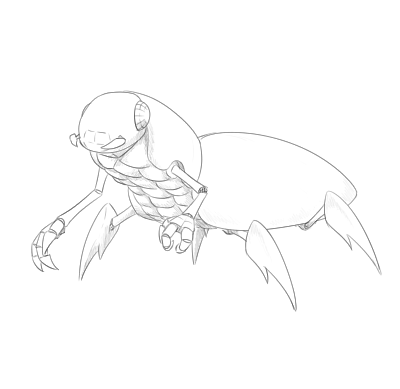 A relatively small Skrog, whose main purpose is to build and maintain the Hive. Short but powerful frontal paws are perfect for digging and breaking materials. Special gland situated behind their heads allows them to produce and secret large amount of sticky saliva, which they use to create a sturdy building material by mixing it with soil and stone.
Skrog workers can be both male and female, even though both are infertile. 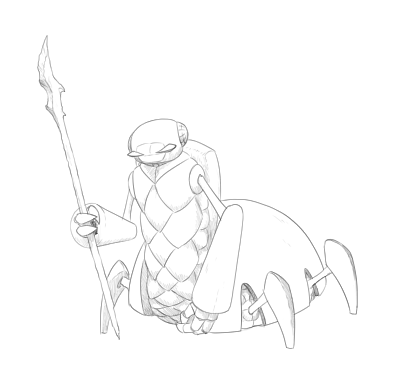 Despite the name, this is the most versatile sub-species of Skrogs. To be born a Skrog warrior means to have the most freedom of choice within the colony.
The primary role, of course, is to protect the Hive through the guarding and patrolling duties. The next most populated role belongs to providers, who travel far away from the Hive to collect food by hunting and gathering. Usually patrols and providers work together for the most effectiveness – one gathers, another guards.
They also help workers to maintain the Hive by decorating and perfecting the layout. They break down and cook food. They take care of the larvae. They craft tools and weapons. And sometimes, as a reward for exceptional service and heroism, participate in mating with the queen.
Skrog warriors can be both male and female. However, only male warriors are fertile and only if they inseminate the queen.


Area of habitat and diet
Skrogs are omnivorous, leaning heavily into the vegetarianism. They can eat meat, but only after it is cooked. Fruits, vegetables and several types of plants can be consumed raw.
They’re not picky to different climates and can survive in both cold and hot areas thanks to the unique structure of their chitin armor, which effectively normalizes temperature when it’s both cold and hot. However, the number of Skrogs is always higher in the Southern regions than anywhere else.


Interaction with humanoids
While Skrogs are not inherently hostile towards humanoid races, they prefer to build their Hives as far away from humanoid settlements as possible. To avoid unnecessary friction and conflict.
Considering that it is possible to communicate with Skrogs, attempts to establish diplomatic relations with them have been attempted numerous times throughout the history. The degree of success is debatable, since Skrogs are not really interested in many things that form almost every humanoid society. They don’t care about fame, wealth and goods that don’t carry practical use. Establishing regular trade with Skrogs is a near impossible task, as the collective activity or Skrogs often distracts them from keeping in mind specific details of deals, debts and agreements.
All Skrogs want from humanoids is so that they don’t trespass and threaten the Hive. They do, however have a long memory for faces and smells carried by individual people, and may even allow visits to the Hives for as long as the humanoids behave.
One thing that Skrogs truly value when dealing with humanoids is the art of cooking. Offering spices and aromatic herbs that can be used to enhance the taste of food while crossing a territory of a Skrog hive, may not only grant you a passage but even entice the Skrogs to escort you and protect from dangers.

A much more difficult situation lies the idea of Skrogs inhabiting humanoid societies. The cases of individual Skrogs leaving a colony are rare but happen. Skrog have a very difficult time at finding a permanent home among other humanoid societies. The main reason lies, if course, in the fireflies.
If a Skrog for whatever reason dies within a settlement, the colony it was born it would find out and declare war on it, sending troops to seek vengeance. Knowledge of this unfortunate fact leads to most humanoids avoiding Skrogs and preferring not to have them around.

Few know, however, that there are two ways to solve this problem.
First, it’s possible to surgically remove the firefly eggs from the body of the Skrog.
Second, fireflies would always fly to the Hive where the Skrog was born, not to the nearest one. If a Skrog travels too far from its Hive, fireflies would simply die before they reach their destination, as their lifetime does not exceed several hours.
edit delete