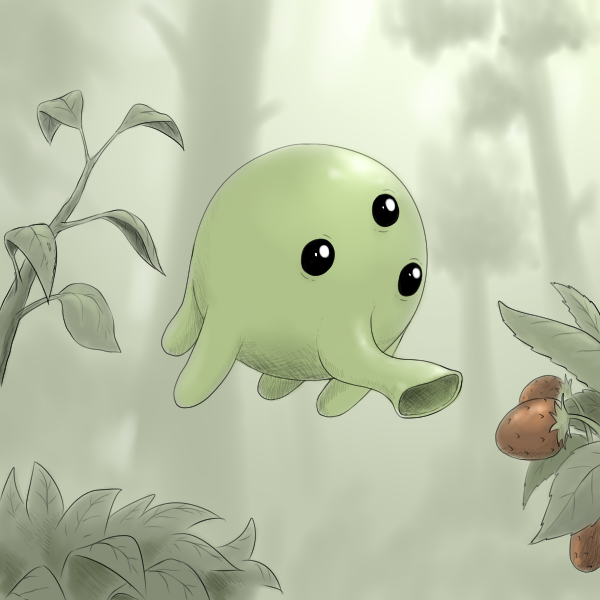 General information and physiology
Mormiks are the most harmless creatures of Karandia. Even if they wanted, their rounded bodies the size of a large orange, complete lack of fangs on their paws or teeth within their trunks leave them unable to harm anyone larger than a fly. Instead, Mormiks rely on their sharp eye-sight to spot a potential threat early and their natural ability to fly to keep distance from it.


Area of habitat and diet
Mormiks can be spotted in every forest and jungle on the continent and beyond. They rarely live alone and prefer to form small flocks, not based on bloodlines. That means that the flock readily accepts lone Mormiks who don’t have a home. They craft nests on tops of tall trees and hard-to-reach cliffsides. If any predator manages to reach the nests, Mormiks will abandon that spot for good and would search for a new place to settle.
Their diet consists of flower nectar, berries and small flying insects, but they can also eat cooked food and adore anything sweet.


Reproduction method
Female Mormiks lay from one to three eggs once in one to three years. Mating Mormiks form a strong but not long-lasting bond for the period of taking care of the eggs and nurturing the young. After the young become independent, the bond between parents weakens and both may pursue new partners within the same flock or outside of it.


Interaction with humanoids
Despite their fragile and careful nature, Mormiks rarely fear humanoids. Driven by both curiosity and hope of getting a snack, they often follow travelers at a distance, lowering it as time goes for as long as the humanoids don’t show any signs of aggression. It is very easy to scare Mormiks off, but is not recommended to do, as their presence has its benefits. Whenever a Mormik is not alone (surrounded by other Mormiks or in presence of creatures it doesn’t consider a threat) it would produce a subtle, easily recognizable coo whenever it senses danger. This knowledge allows travelers to use presence of Mormiks to prepare for or even completely avoid unwanted encounters with dangerous monsters and beasts.
As an exception, Mormiks never warn humanoids about presence of P-type monsters, unless such monster displays aggression towards Mormiks themselves.

Mormiks have great memory and are relatively intelligent. However, people rarely try to domesticate them as pets because of the way they evaluate threats. If you frighten or hurt a Mormik even once, it would remember that for a very long time and would avoid your presence, if not abandon you completely. Re-gaining trust of a Mormik is almost impossible task.


Mormiks are eatable. But what kind of monster you have to be to even consider that...