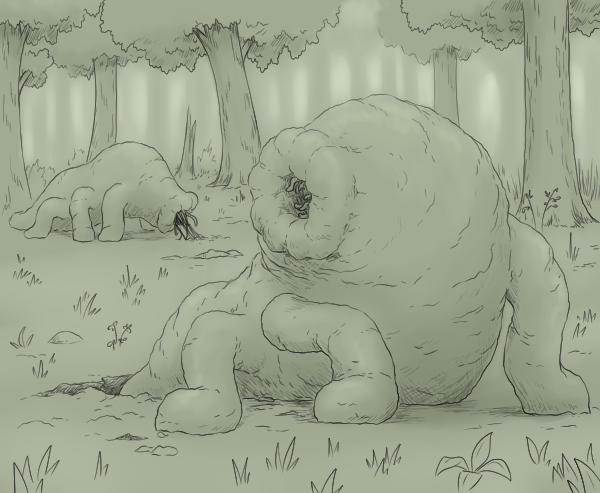 General information and physiology
Ugly, massive and heavy Earth slug-worms are a mixture between a slug and a worm. They have boneless, sack-like bodies, six limbs and a gaping mouth, which contains several long, stretchy tongues. Under the lips the maw contains several rows of retractable, uniquely shaped, individually moving teeth.
With their help Earth slug-worms can burrow underground and create tunnels by either using their teeth as a shovel, or by biting through the earth, swallowing and pushing soil through their body similar to regular earth-worms.

Because the body of the slug-worm has no bones, it can stretch and twist in every possible way. This ability, however, becomes less and less pronounced as the creature grows in size and gets heavier.

Earth-slug worms have no eyes and fully rely on sense of smell and hearing. Both are extremely sharp, especially the sense of smell. Its receptors fill the entire length of each tongues. By shoving the tongue into the ground, Earth slug-worms find their favorite roots and tumors, no matter how deep they are. Also, when exposed to the air, the tongues can catch scent of corpses from kilometers away.

Often referred to as Shy giants, Earth slug-worms are peaceful in nature. They rarely pay attention on presence of other beasts and humanoids around them. If approached carefully, one can even be patted without any hostile reaction.
However, Earth slug-worms have a very sensitive hearing apparatus, and can be easily frightened by loud, sudden sounds. When frightened in such manner, Earth slug-worms often go into frenzy and attack whoever they view as a threat. They have only one way to protect themselves - by grabbing and swallowing their foe. Or, if the creature us too large or too strong – by simply fleeing.

It takes a while for an Earth slug-worm to calm down after it gets frightened. And for a period of time similar sound would no longer scare them as much. The only sound that they never get used to and which terrifies them like no other, is the sounds of approaching Clickhide, their natural predator.

Earth slug-worms have a strong but slow regenerative ability. They can restore missing chunks of flesh, teeth, tongues and limbs. However, unlike for example Sklugs, Earth slug-worms can’t withstand very much damage to their flesh, and their sensitive organs, situated close to their maw, have no solid protection around them.
Earth slug-worms are completely immune to any natural toxins and poisons. Their skin constantly extracts thin layer of slippery substance. This substance protects their skin from scratches while digging, but it dries out fast if exposed to direct sunlight.


Area of habitat and diet
Earth slug-worms are widely spread across the entire Karandia continent, feeling comfortable under any non-extreme temperatures. They are territorial creatures, living either in small or large groups without any kind of hierarchy or leadership.
To survive they require soft soil, decent levels of moisture and presence of shade to hide from direct sunlight. Forests, jungles and swamps are their favorite places to inhabit. However, sometimes they can also be met in prairies, where they are active only in the evenings and night time, while hiding underground during sunny hours.

Their main diet consists of roots and underground tumor-based plants. However, they also happily consume corpses. Earth slug-worms are the only natural enemies of hungry tubers. Their teeth are strong enough to bite through even large Hungry tubers, and their immunity to toxics protects them from the Hungry tuber’s destructive stomach juice.
Strong, toxin-immune stomach of an Earth slug-worm allows it to digest even poisonous and near-fully decayed flesh, the kind of meal that no other creature would dare to touch.
Living creatures swallowed as a self-defense can also be safely digested.


Reproduction method
Earth slug-worms grow slowly but eventually reach such large size, that it becomes uncomfortable for them to move. That’s where they fully dig underground and begin process of replication. One Earth slug-worm splits evenly into two parts. After a while both parts begin moving independently. When this happens, the back-door of previously solid Earth slug-worm becomes the maw of the new one. Tongues and teeth appear there within the next two weeks.


Interaction with humanoids
In most humanoid societies Earth slug-worms are usually avoided and ignored. Because the creature hates loud sounds, they can never be met anywhere near large settlements or roads.
Hunting Earth slug-worms is pointless, as their bodies provide no useful materials and their meat, while technically eatable, has a terrible rotten taste.


Fun fact
Somewhere during 80th century in the Western region of Boltania happened a population boom of Clickhides. For one reason or another it was left neglected by the kingdom, and throughout the following century Clickhides hunted down and exterminated all Earth slug-worms in the region. Left without their only natural enemy, Hungry tubers were allowed to thrive on the hapless citizens of Boltania and to this day Jungle of ruins homes the largest population of this terrible predator.
edit delete