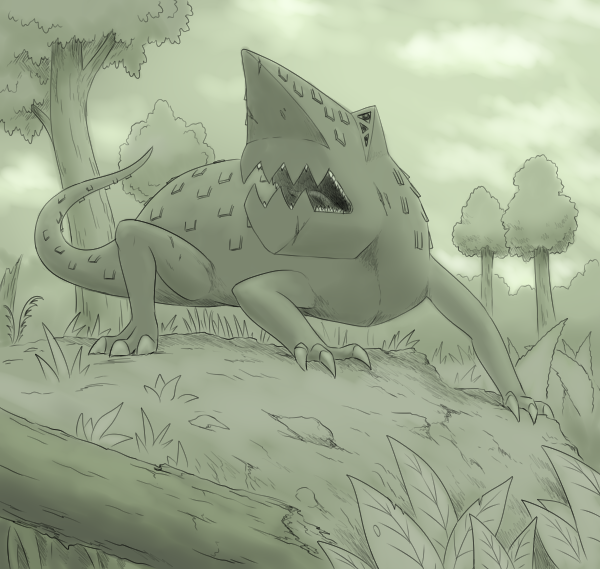 General information and physiology
Clickhide is a powerful, heavy and highly aggressive predator, for its ferocity and brutality often referred to as ‘Landshark’. It is famous for its unusual hunting method. Instead of stalking a prey or preparing an ambush, it does the complete opposite.
Significant portion of Clickhide’s skin is covered by special hollow-boned protrusions, which produce loud clicking sounds whenever the creature moves. Many animals choose stealth as defensive tactic, hiding and staying motionless whenever they sense threat. But it’s not easy to remain calm when a creature like Clickhide passes by. Those animals who get agitated by the clicking noise and jump out of the hiding to flee become the primary prey of Clickhide.
Six eyes of this beast provide a very limited field of view, but they’re excellent at spotting and tracking motion. When a prey is within reach, Clickhide rams it with its beak-like nose, knocking it off balance. Powerful jaws, armed with razon sharp teeth easily finish the job.
Clickhides are fearless and often attack creatures significantly larger than themselves.


Area of habitat and diet
Clickhides mostly inhabit jungles and forests of Central and Southern regions of the continent. Their numbers are relatively low and outside of a very brief mating season they live alone.
These are territorial creatures who claim wide areas as their hunting grounds and patrol them daily. They eat exclusively meat of anything they are able to catch, be it a monster, animal of human.


Interaction with humanoids
Despite being rare, Clickhides can be encountered near humanoid settlements. Whenever a Clikhide is spotted near one, it’s always a wise idea to hire mercenaries or to involve militia to dispatch it before someone of the local residents inevitable gets eaten.
In many nations it is natural to teach children how to behave in case of encountering this beast. Gladly Clockhide has one crucial exploitable weakness.
While its eyes track motion flawlessly, they can hardly distinguish shapes of motionless objects and people. Staying perfectly calm in front of a Clickhide in most cases helps to avoid its attention altogether. If spotted, it is crucial to get out of sight. Clikhides have a very short attention span and can lose interest in prey when they lose track of it.
edit delete