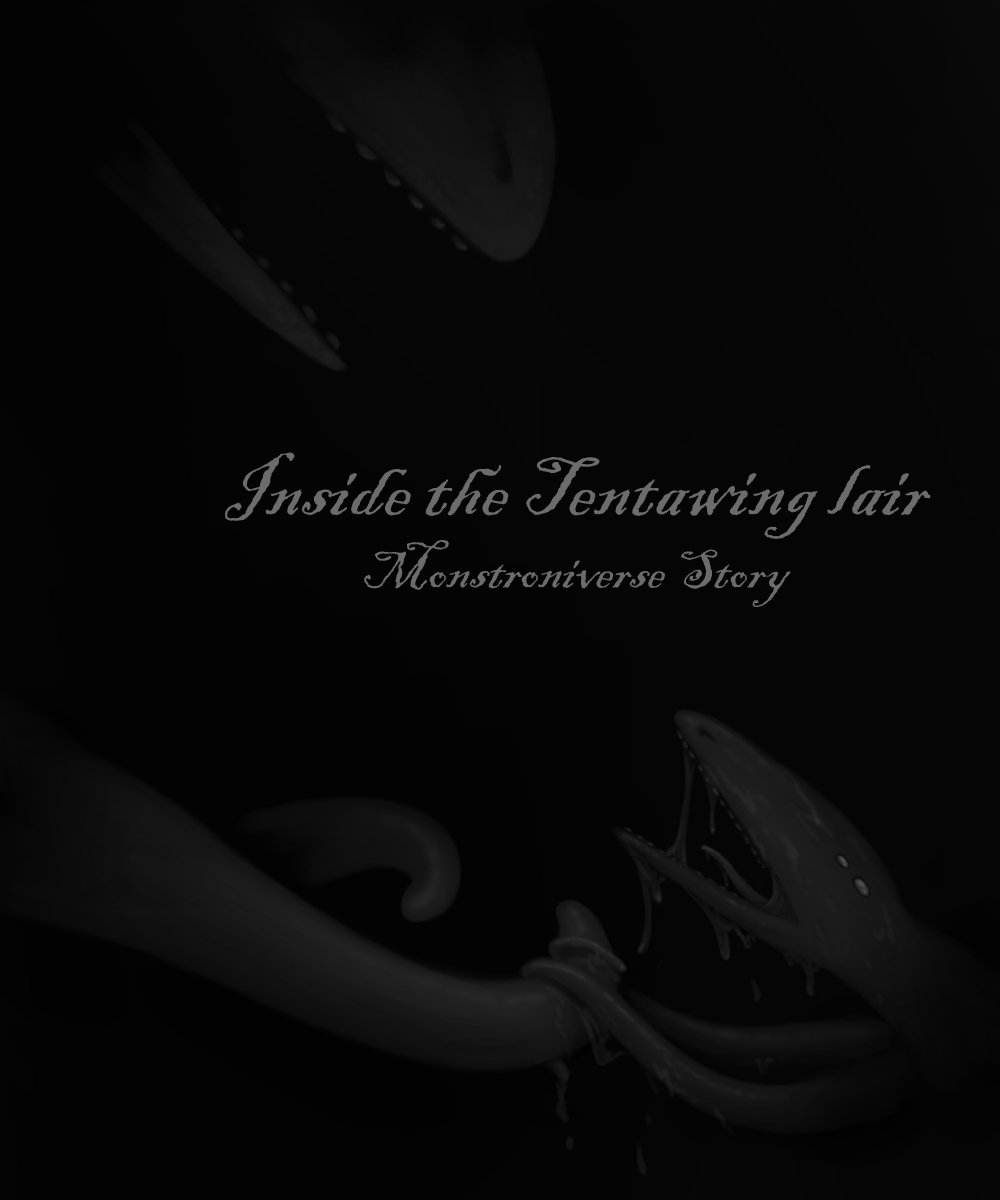 
Darkness. Warm stone. Hot air. Squirming of flesh. Muffled moans of suffering and pleasure. Sweet smell of nectar mixed with sweat and other fluids. The pitch black cavern brimmed with life. With creatures who made it their home and those who became their unwilling guests. She could see them all.
Every dark elf has a natural dark vision and can see even without the slightest source of light. Here, in the deep part of the cavern she was the only captive able to see. But deep inside she envied those blinded by the darkness, who were spared of the horrible sighs. Of things the owners of the cavern did to them.
Her belly rumbled. Something squirmed inside of it. Something alive, indifferent and alien took residence inside her body. Sexual pleasure pulsated through her very core, filling her every vein and nerve. It was so intense that her entire body, shivered uncontrollably. And yet she did not enjoy it. Her mind refused to. The sensation inside her rounded belly disgusted and infuriated her and there was nothing she could do.

To her the worst of all was not the experience she was going through right now but the memory of events that led to this. How easily she was caught. How much she underestimated the Tentawing that swooped at her from above. In one swing she managed to cut off two of its tentacles. She always hated monsters and the successful beginning of the encounter filled her with a sadistic desire to toy with the creature before killing it. She never made the second swing.

Locked within the arousing fever, struggling to maintain clear focus, the dark elf woman raised her eyes to try and distract herself. Just like all the others, it was the only thing that she was allowed to do. Her legs, chest and arms had been bound to the stone wall by a thick layer of something resembling a cement. Pulling limbs out of it or breaking it without any tools was a futile endeavor. All captives were women as only they could serve the interests of the hive. The stone walls, the floor and the ceiling were occupied by small, foot-sized larvae with triple jaws. These little hard-working creatures were the ones who built this place by digging straight through the mountain. They were also the ones to bind the captured humanoids with their glue-like secretion that they mixed with grinded stone. This was their home. Their hive.

The dark elf counted five humans and two orcs just in the field of her view. But judging by the sounds coming from around the corners, from above and below, there were more… so many more. All of them naked. All bound to the walls. Just like her they were brought here for one and only purpose.

The dark elf looked at her right, at a silently squealing, moaning human girl with red hair. Her belly looked stretched to the maximum and streams of faint liquids ran down her thighs. Something moved between her legs. A tiny tentacle. Then two. Then a long, snake-like head emerged with a high-pitched screech. The creature desperately tried to squeeze itself from the girl’s vagina by grabbing onto her thighs with its fingerless, joint-less limbs. In vein. The tentacles were soaked and too slippery to take a proper grip. Half of its body got stuck, causing the red haired girl to squeal even more.

A huge silhouette emerged from around the corner. It was almost three meters long and had a shake-like body with eight tentacles, by four at each side. It floated above the ground without any sound, slowly approaching the red haired girl and the struggling newborn monster. The grown-up creature paid no attention to the human. Its snake-like eyes were fixated at the struggling youth. Gently, the tentawing overseer reached its tentacles to the small one, hooking the tips and holding them close to it so it could grab them and finally pull itself out.
Gaining the much desired freedom, the newborn tentawing screeched again, effortlessly floating in the air. It flapped its tentacles like an overly excited bird, spraying fluids all around the floor, and licked its savior before flying away. The mature tentawing also moved on, leaving the human and the dark elf behind.

The dark elf looked with pity at the red haired girl. Sweat ran down her pale body, dripping into the puddle of fluids at her feet. Her belly was now flat. Thighs were shaking. Her eyes were fixated at something at the floor before her, void of any emotion and hope. A temporary rest. The dark elf, who woke up in this cave not so long ago, realized that this poor girl must’ve been here for a very long time and went through this procedure already many times.

A strange sound came from the left and the dark elf looked there to witness another display of the tentawings’ hospitality. Another mature monster hanged in the air in front of a muscular orc woman with long black hair and enormous breasts. The tentawing held a collection of small reddish balls, which one by one were stuffed into the orc’s mouth. The orc shook her head, barked curses and spat the content of the balls back at the creature. That didn’t bother the tentawing much. It simply became more persistent and used extra set of tentacles to hold the orc’s head in place and to cover her mouth after yet another ball got stuffed into her mouth. This time, disgusted and enraged she had no other choice but to swallow it.
The dark elf knew what was going on. These were infertile eggs, laid by the tentawing larvae. Tentawings captured women from distant parts of the land and carried them here to use as hosts for their young. And unlike so many other P-type monsters who practiced this form of procreation, tentawings never let their captives free. To keep them alive for as long as possible, the countless infertile eggs were used as food for the captives. This torture could easily last for weeks.

A scream from the other side attracted the Dark elf’s attention. The red haired girl squirmed in her bonds in a desperate attempt to stop the new larvae, slowly climbing her leg.
“No… not again… stop! Please, no!” she pleaded to the soulless, uncaring beast. She gasped and widened her eyes when the warm jaws of the larvae dug through the folds of her pussy and shamelessly squeezed their way inside. While enduring the humiliating procedure, the eyes of the human darted in the direction of the dark elf for the first time. She must’ve noticed the faint glow of the two red dots.
“How long is this going to continue…?!” she asked with shivering voice. Her cheeks flared with forced lust when the larvae’s tail disappeared from the sight and the woman’s belly once again gained shape. Small now, but not for long. The toxins emitted by its skin caused arousing effect within the host’s body. The sexual energy produced by the host’s body was absorbed by the larvae and used for transformation into adult form.

“Very long I’m afraid…” answered the Dark elf who only knew about this creature from the books. “Until the entire Hive is transformed or… until someone comes to save us.”

“Will anybody come?” the desperation in the red-haired girl’s eyes gave way to a spark of hope. That spark that faded as quick as it appeared, when the red dots swayed from left to right, as dark elf shook her head.

“I wouldn’t rely on that… Uh!” the Dark elf gasped loudly, feeling the movement inside her own belly. She couldn’t see it from here because of the bond under her breasts, that held her in place, but she felt how stretched and large it was. And although it didn’t hurt physically, thanks to the Gift of nature that the larvae provided, the sensation of shame and helplessness did.

She felt the stream of warmth running down her thighs and her pussy stretching. Squirming tentacles touched her dark-grey skin. It screeched. This was her very first time. But it will not be the last.
edit delete