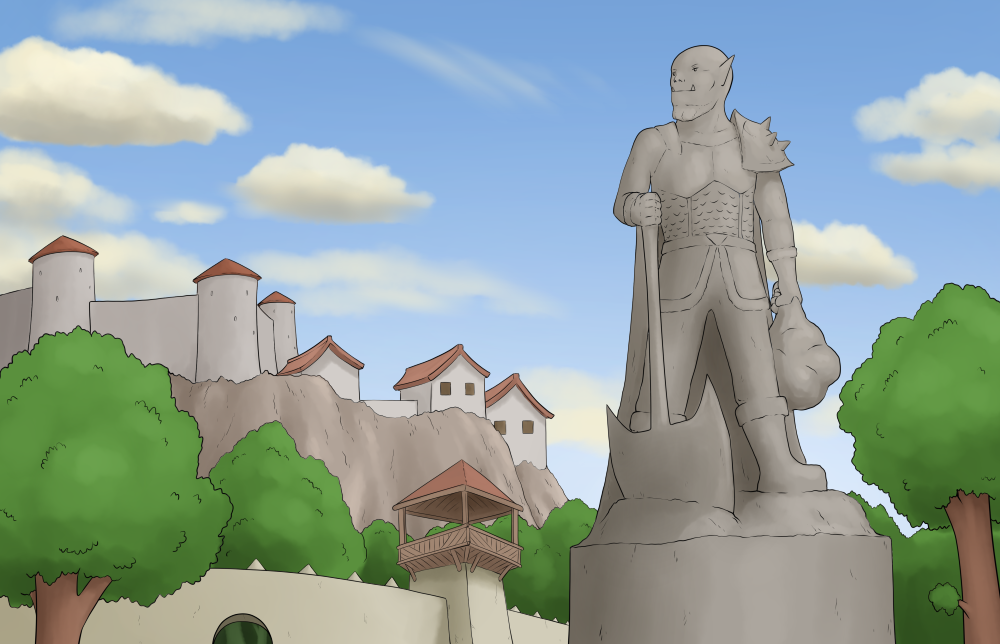 
The princess and the dragon
Once upon a time the Northern part of Karandia where Kroll stands now, was a lot like Eastern greenlands. A wild, untamed land populated by small but numerous orcish clans who often fought each other for the most insignificant reasons. And it would continue like this if not a very important event that happened in 86th century near the Orcbolg lake. An event well remembered by residents of modern Kroll.

To the West from Orcbolg lake once stood a small human kingdom, which no longer exists. One day its princess, accompanied by her loyal comrades, ventured far away from home on a monster hunt. During the hunt they stumbled upon a fresh field of battle. Charred ground was littered with fallen orcs, most were killed but some, including the clan’s chieftain were heavily wounded but alive. Usually humans payed no respect to orcs of these lands and would leave them to die or even finish them off, but the princess was curious of what could happen here and questioned the wounded chieftain.
She found out that his clan has been attacked by a hungry dragon while the chieftain and most fighters were away on a hunt. After returning the orc witnessed a horrible fate of his clan, gathered everyone who was able to hold a weapon and chased the beast. The dragon was not hard to find, but it was way too strong for simple orcs to defeat. Fully understanding the orc’s feelings, the princess promised to track down the dragon and avenge his people. On the next day the promise was fulfilled.

After several years of events which could only be described properly in a full romance novel, the princess and the chieftain engaged in a new, yet unheard kind of relationship. Humans of the Western kingdom did not approve such connection and the king even rejected his daughter. Orcs, however, inspired by the bravery and strength of the human princess, eagerly accepted her into the clan as a new queen.
The skull of the dragon slain by the princess and her warriors is preserved and displayed in the throne room of the capitol.

Together with her husband she played a huge role in the future of this land. For the first time local conflicts were successfully solved through diplomacy. Throughout decades several surrounding clans merged into one through profitable marriages. The clan rose above all others, forever shattering the delicate balance of the orcish clan-based society. A large town of wood and stone was built and declared a capitol of a new kingdom – Krolmar.
The new rising kingdom caught attention from other lands. In 91h century the first trade deal with Sahangal has been established. Orcs of Krolmar warmed up to representatives of other races and began accepting numerous foreign customs and habits. However, the further growth of Krolmar was heavily delayed by the rise of the Green tide.


Part in the Green tide

When in 110th century the clans of Eastern greenlands began forming the colossal military union, their representatives arrived to Krolmar with a demand to join. The ultimatum was pronounced loud and clear – if Krolmar would not join the Green tide – they would be the target of its wrath after Damani.
Left without a choice, thousands of Krolmar citizens had to join the Green tide in their relentless conquest of the Eastern Karandia. Embassies from the human kingdoms in Krolmar had to be closed down, although the representatives were secretly and safely escorted out.

While most Krolmar orcs supported the destruction of Damani at first, being sympathetic to the cause and judging the cruelty of the human kingdom, very few saw any point on going any further. After the fall of Damani numerous voices within the Green tide spoke against the continuation of the campaign and were mercilessly suppressed. Unsurprisingly, many repressed orcs were from Krolmar. Others obeyed out of fear, but the hatred of the Green tide began to slowly growing within it. And one of the orcs whose hatred would burn the hottest, was a simple soldier named Kroll.


Kroll’s rise to power
Young orc Kroll from Krolmar joined the Green tide at the age of 15 and went through countless battles on the territory of Damani and Boltok. His incredible fighting skills and sharp mind allowed him to perform several highly dangerous but successful operations within the enemy territory and he was quickly noticed by the warchiefs of the Green tide. Slowly but steadily he rose in ranks and gained influence among soldiers. After the unfortunate inside confrontation, when many orcs were executed for going against the Green tide’s ideals, he lost two of his best childhood friends. Kroll blamed the Green tide itself for this and secretly promised to put an end to it whenever a chance would come.
He was already in his fifties when such opportunity arrived. The Day of the burning sky crashed the Green tide’s hopes to invade Tamir and when the remaining forces returned to the Eastern greenlands, Kroll was summoned to the Hall of clans for discussion of further actions.

The rain of fire, witnessed by thousands of orcs played a heavy role in the fall of morale among simple orcs. Many clan chieftains spoke for the elimination of the union, seeing in the skyfire a bad omen. Kroll was among them, although he was smart enough to know about the artificial nature of the event and simply wished to use the opportunity and put an end to the union.
When the heated debate between warchiefs of the Green tide and the opposition threatened to spill into a mass fight, Kroll stepped forward with a bold speech. This was the brightest, most important moment of his life and he used it as perfectly. Pulling the strings of orcish traditions, pride and mentality, he reminded the warchief about the goals of the Green tide, which in his words were already fulfilled and after seeing no hint of their cooperation, went even further and challenged each and every single one of them for a fight. At first they tried to refuse, fearing the might of the orc who alone took part in more battles than each of them, but the overwhelming support of the crowd and the Kroll’s declaration that he would fight them not one by one but all at once, drove them into rage by such an insult. Together they and their warriors charged Kroll and what followed could only be described as a massacre.

After Kroll collected the heads of the fallen warchiefs he declared the Green tide disbanded – no one dared to protest that. Then Kroll left Eastern greenlands forever and ventured to the South, towards Sahangal, which was now a part of Principalities. He met with the humans in the open field and presented the heads of the Green tide warchiefs as a peace offering. Finally, he returned home, to Krolmar and have spent the rest of his days as a military expert.

Kroll’s role in the downfall of the Green tide can’t be overestimated. He became a national hero and an idol for every aspiring young orc of Krolmar. After his death the territory controlled by Krolmar was named after him.
edit delete