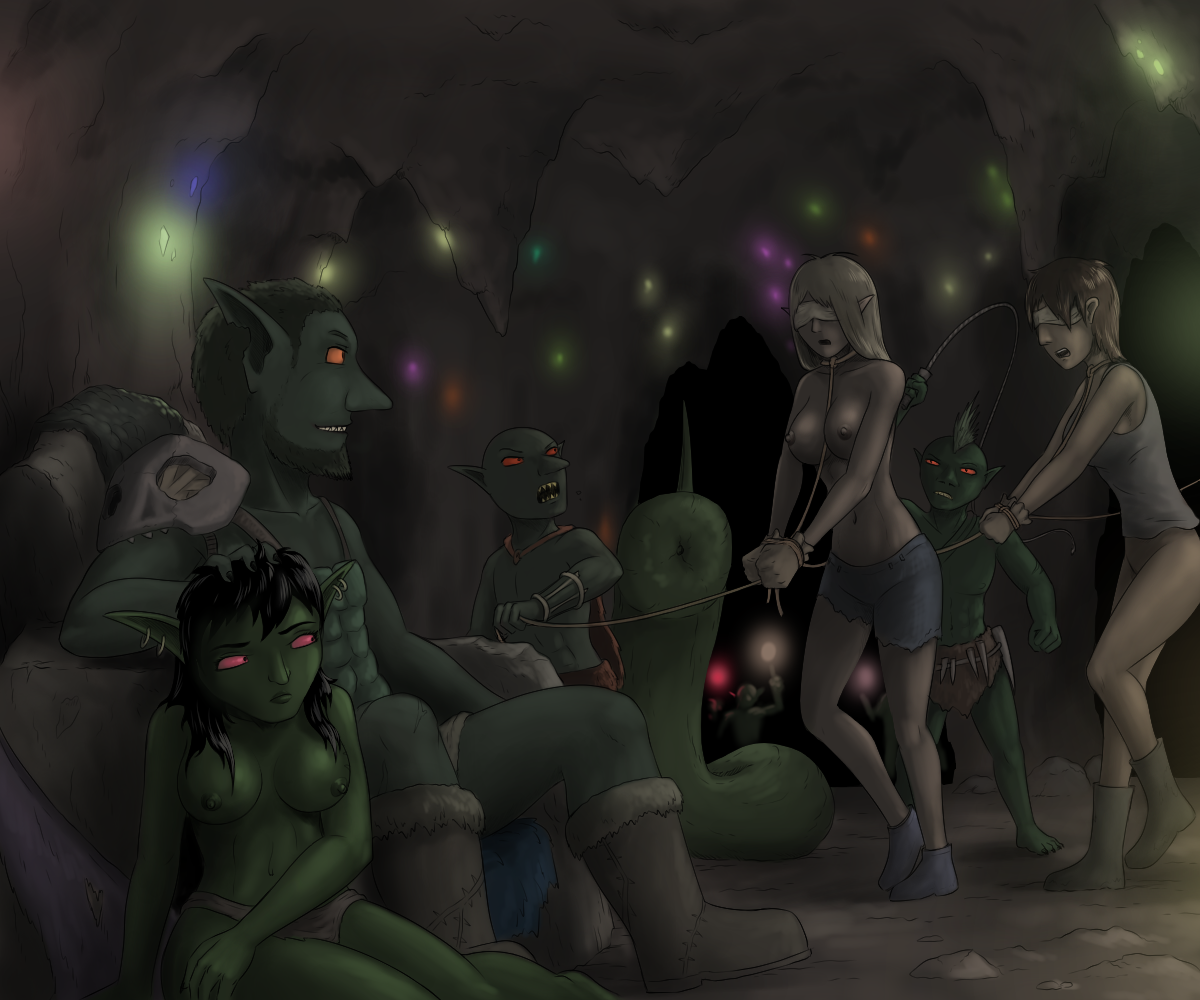 General information
To common dwellers of the surface goblins are primitive and hateful enemies who cause nothing but trouble and destruction wherever they appear. The typical interaction with goblins on the surface happens when they raid unsuspecting settlements, in which goblins seek to capture women of every age and race to bring back into the underworld from where they will never return.
And while goblin raids are a common occurrence in every corner of the continent, in fact, only the tiniest fraction of goblins ever reach the surface. Deep below, in the infinite tunnels of the Underworld millions of goblins are born and killed in never-ending tribal wars without ever seeing the sunlight.
Surface to goblins is like an ocean to humans – it is vast, unknown and mysterious. It beckons and frightens at the same time. Only the strongest and bravest tribes dare to attempt to venture upwards. But if they succeed, the rewards are great.


Physiology
- Goblins are green-skinned humanoid creatures with long noses and ears. After fairies they are the shortest race, with height varying from 110 to 140 cm.

- There are not many hair color options and most of them lean heavily into dark tones of green, brown, red and black.

- Their bloody-red eyes can see perfectly in the dark with minimal source of light thanks to the natural spell Night-vision.
The presence of this spell is surprising, since goblins are unable to expand their Energy pool and can’t learn to use magic. Yet, the little energy of their dormant Energy pool is enough to permanently sustain it.

- Goblins are naturally smart creatures, but unfortunately, their life style and environment prevent them from uncovering their true potential.


Social structure and the life of a typical goblin
Due to specific environment of the Underworld, which could be roughly described as a colossal complex web of tunnels and hallways, goblins rarely gather in large numbers. They are not as strong and sturdy as dwarves, who create underground cities by carving them right into the earth, so they have to adapt to the underground landscape as it is presented to them. Majority of goblins form tribes from one to three hundred members and tend to follow either shamanistic type of leadership, where shamans assign a worthy goblin as the leader, or more barbaric type, where the leadership is claimed by the strongest and the craftiest.
There is an equal proportion of goblin tribes who take over a territory and settle down, making it their home, and nomads who travel throughout the Underworld in search for enemies to fight, territories and goods to capture. Life of a modern goblin is short and violent. The minor skirmishes among goblin scouting parties happen all the time, typically escalating in full-scale tribal wars.
Usually when that happens, and one tribe suffers a defeat, the remaining members are hunted down and killed. Those who manage to get away, perish from the claws and stingers of Underworld monsters. Goblins rarely take captives. Exceptions can be goblin women, who are an exceptional rarity, and goblins who possess useful, unique skills of craftsmanship or enchanting.


The tragedy of goblin race
Goblins are rightfully considered the most hated race in Karandia, but the majority does not realize the deep tragedy that afflicts this once peaceful race. The truth is, that for thousands of years the entire race of goblins has been artificially tempered with, guided into certain direction with trickery and malefic intend. Goblins of today are but a shade of what they used to be, a pawn and a tool in hands of the insidious Dwarves.
There used to be a time when goblins made children the traditional way and the gender representation of male and female was semi-equal. But it all changed after goblins discovered Oblins – worm-like creatures with a single horn on their head. Found in almost every goblin tribe, these strange creatures are endlessly loyal and obedient to goblins, and follow their every command. While first scientists who discovered these creatures, considered them as mere domesticated pets, further study revealed a much more disturbing truth.

Some facts about Oblins:
First of all, Oblins serve to goblins as their breeders. It so happened that these creatures are perfectly compatible with goblin physiology and can be impregnated by male goblins to produce offsprings much fast and in larger numbers than it could be done by goblin women.
Second, Oblins give birth to a disproportional high number of boys comparing to girls. 19 out of 20 goblins born from Oblins will be men.
Third, Oblins produce a special pheromone that allures male goblins, forcefully attracting them for sex and keeping them attached.
Fourth, goblins can’t and don’t know how to breed Oblins themselves. Oblins refuse to mate between each other, and seem to lack any physical traits that would allow that. They are the greatest treasures of the tribes and are the greatest prizes for those who manage to defeat an opposing tribe in battle. The only way to obtain new Oblins is to get them from Dwarves, who only trade them for captured women from the surface, or, at a lower, rate, for goblin women.

The existence of Oblins made goblin girls obsolete, and this led to horrible consequences for them. In the absolute majority of goblin tribes women have no rights or freedoms. In the best case they are kept around as sex slaves and are treated not better than the captured women from the surface. In the worst case they are used as trade goods to be exchanged for Oblins. However, Dwarves put a much high value on women of other races, and price goblin women at a lower value than the rest.
Goblin tribes who treat their girls well are a rare exception, and can only be met in areas of Underworld too far from Dwarven cities or on the surface.


Taking these facts into consideration, it becomes clear why goblins turned into the monsters they are known today. It is unknown when the infiltration of Oblins into the goblin societies of old has begun, but it is clear that the process has long passed the point of no return. For thousands of years the entire race of goblins has been infected and altered. The entire existence of modern goblins in the Underworld revolves around Oblins, leaving no room for social, religious or cultural development.
To travel to the surface to capture slaves. To trade slaves to Dwarves for Oblins. To breed Oblins and to raise the number of goblins in the tribe. To wage wars and to capture Oblins from other tribes or to invade the surface and to get even more slaves.
This is the never-ending circle modern goblins are trapped within.

Oblins aside, the only other race that goblins can mate with are orcs. But in both cases, be it an orc woman impregnated by a goblin, or a goblin woman impregnated by an orc man, the chance of pregnancy is very low, and in case of success, the children are guaranteed to become half-goblins. A mix between an orc and a goblin with certain traits inherited from both races.
Such children are infertile and can’t reproduce, being also the only example of true half-breeds in Monstroniverse.
edit delete