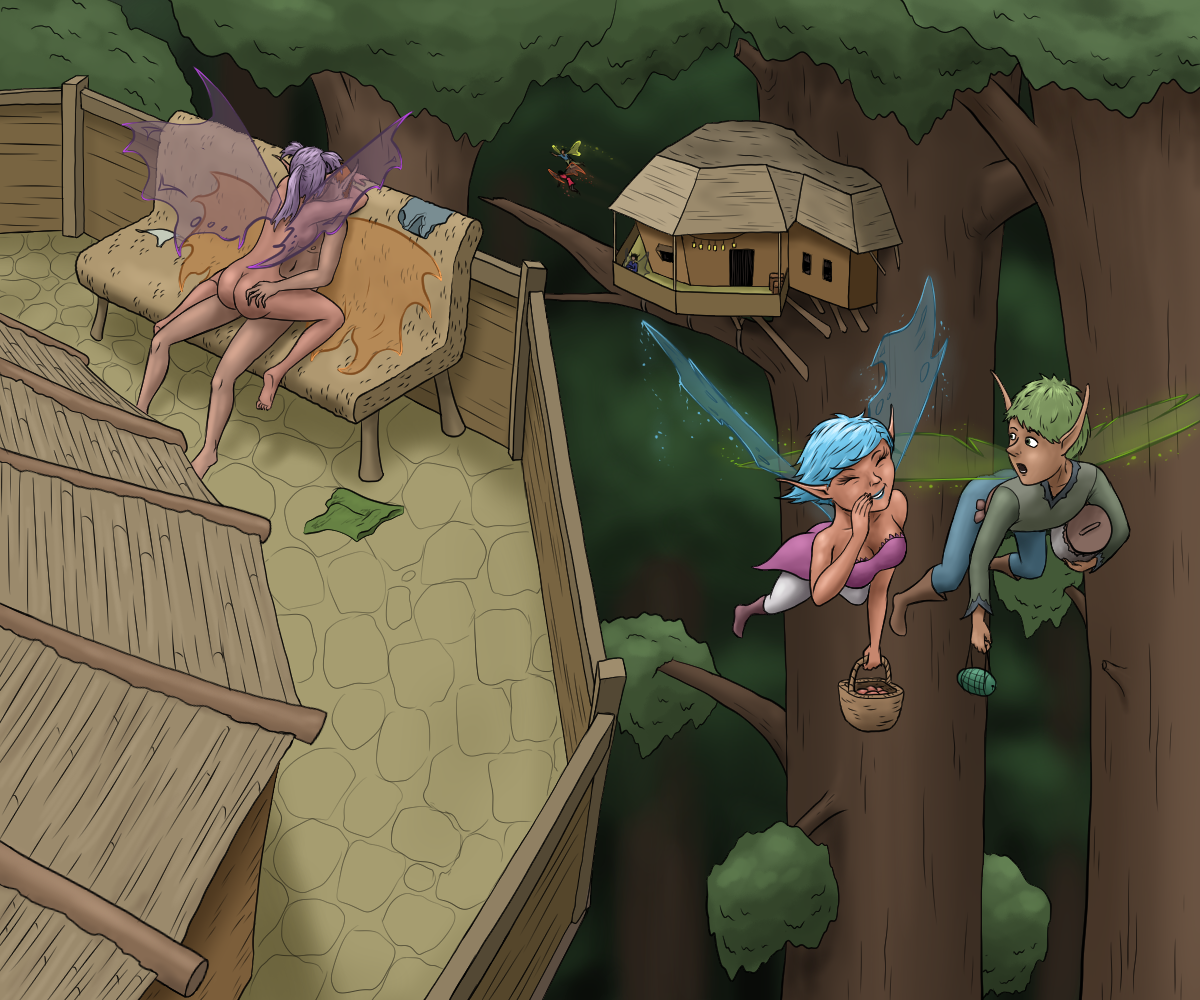 General information
Fairies are not the least populated humanoid race in Karandia, but finding one in large towns and cities is rare. Fairies love calling themselves children of nature, and prefer to build their villages and towns in the hard-to-reach areas of the wild, on tops of mighty trees and mountain cliffs where they feel protected from predators, monsters and most importantly, the unnecessary conflicts.
The most sought out places for accommodation are so called Faydom trees. These unique colossal trees provide vast flat surface on the top of their trunks and provide a never-ending source of crystal-clean water circulating through its center. However, these trees are exceptionally rare – there are less than a hundred of them across the entire continent.

A common belief about fairies states that they hate conflict and try to avoid it almost religiously. In reality they simply feel more comfortable being among their own. Fairies are generally viewed as kind, friendly and helpful people to those who managed to gain their trust. Representatives of other races who manage to reach settlements of fairies may expect a warm welcome and are treated well during their stay.
However, the stories of rare evil, xenophobic fairy tribes found in some of the most dangerous parts of Karandia are also unfortunately true.

Fairies are a curious, adventurous people. Very often they leave their homes behind for long periods of time to visit cities and towns of other races, to learn, work and live there. Most of the times such adventurous fairies eventually return home and share the gathered knowledge with the rest. Some stay behind for good.


Physiology
- Fairies are a short (From 120 to 160 cm high) and physically weak race. Even the strongest fairy would struggle to beat an average human in a physical fight.

- Their skin color usually varies from human-like to the tones of pink, red, purple, blue and green. They may have eye and hair color of the entire spectrum. Bright, toxic tones are not rare. An interesting fact - their eye and hair color may not match, but hair and wing color always does.

- They are a magic dependent race with the richest energy pool among all other races of Karandia at the moment of birth.

- They can fly with use of their membrane wings, which, despite fragile look, are actually incredibly sturdy and flexible. Each flap of the wings activates natural levitation spell for several seconds. This spell differs from Levitation field in two major ways. First, it consumes significantly less energy, and second, it only affects the body of the fairy, not their clothes or items they may carry. During the flight fairy wings produce a subtle glow and colorful sparks. These sparks are often mistaken for the so-called Fairy dust, which is believed to be a highly valuable enchanting resource by the uneducated.
However, the sparks produced by the fairy wings are a simple visual effect of the spell, nothing more. Fairy wings do not produce any physical residue. Fairy dust exists, but it created from specific components and has no connection to fairies.

- Wings do not have nerves, and they possess regenerative capabilities. If damaged or even cut off, the wings would eventually grow back within a month. The fairy may greatly accelerate the regrowth of the damaged wing by concentrating and redirecting Ethereal energy into them. This is not a natural skill and it needs to be learnt.
The wing remains usable if at least 50% of its surface is still attached to fairy’s body, however any damage or missing part causes increased consumption of energy of the natural levitation per flap.

- Wing shape, size and pattern is unique to each individual fairy, and remains unchanged even if the wings were damaged, lost and re-grown.


Procreation
Interestingly enough, fairies can have children with a wide variety of races, but only with one condition – they must have a rich Energy pool.
That means they can have children from and with not only all elves and dryads, but also some humans and orcs. Humans and orcs who have dormant Energy pool have no chance to impregnate a fairy or to be impregnated by one.

Representatives of other races impregnated by fairy men have a very low chance to have fairy children, around 15%.
edit delete