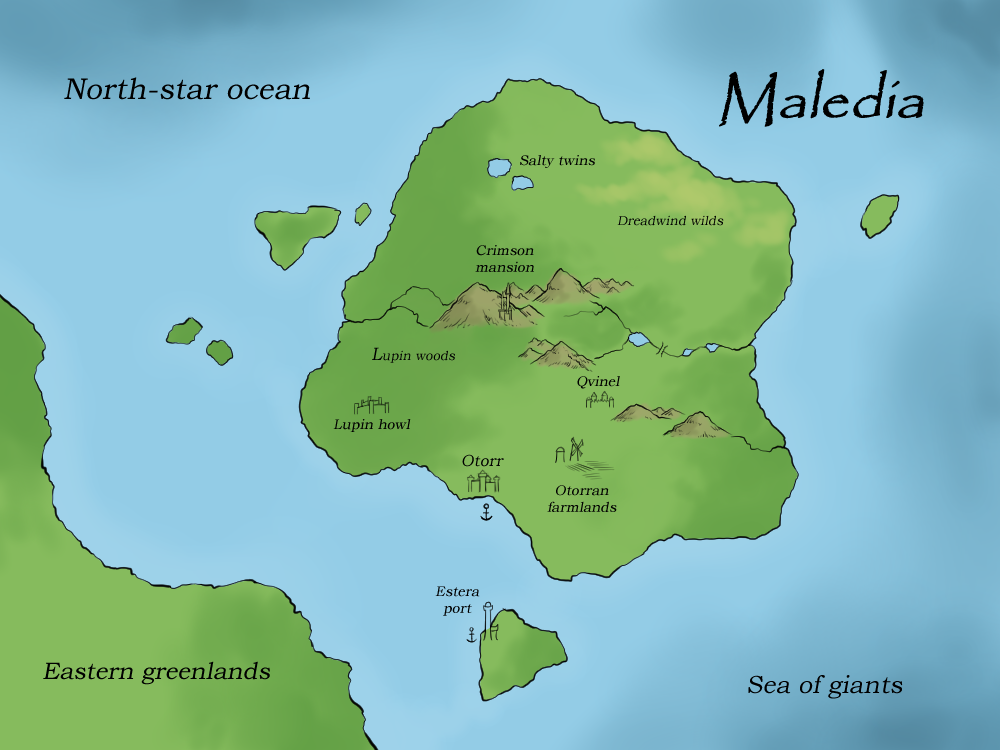 Secret society and the origin of Maledia

Curses are not uncommon in Karandia, and the carriers of a curse, even those who are strong enough to resist its damaging sides, are often treated as monsters by most societies of Karandia. In the end of 82th century in the heart of Boltania appeared a small secret society of nobles, each afflicted by the curses of Lycantrophy and Vampirism. The goal of the society was simple – to help each other in search of an effective cure and create peaceful existence for all afflicted.

For the next three centuries the society grew in size, accepting people of all social status within its ranks. However, it failed to bring any significant change on the major scale, and at some point even became targeted by inquisition till the beginning on the Boltania’s civil war. While being completely unrelated to the activity of the secret society, the civil war wedged the stake of doubt into the hearts of its members that any change was possible in any of the existing kingdoms. Instead of seeking a cure, they decided that the most productive measure would be to embrace the curses and to create a new, unique nation for the cursed to live in.

Morra island, at the North-Eastern edge of the continent fit this goal perfectly. It had been considered a neutral territory, due to lack of any valuable resources and a very poor geo-political location. Its only residents at that time were several settlements of pirates and a small fort of Boltania. Built only several years prior, it’s mission would be to eradicate the pirates and to take the isle under the control of the kingdom. But after the start of the civil war, nearly entire garrison has been ordered to return back to homeland.
This was a perfect moment for the secret society to capture the island. While Boltania was burning in the fires of civil war, the nobles of the secret society used their wealth to acquire ships and resources needed for their conquest. Under the shroud of night hundreds of members arrived to the Southern shore of the island close to the fort and used full power of their curses to captured it in one sudden attack.
Making it their base of operations, they proceeded to purge the island of pirates, most of whom preferred not to deal with the cursed invaders and left, while some even agreed to join them, on condition that they would not be forced to become affliction.

Within several months the entire Morra island has been captured by the secret society. It has been declared new nation Maledia, called so after a countess of Boltania who was among the original creators of the society but who unfortunately has been captured and executed before the beginning of the civil war.
It was too early to celebrate, as the threat of Boltania’s retaliation was very real. But as history goes, one’s misery is another’s bliss. The civil war led to fracturing of the Boltania into Boltok and Damani kingdoms. Each of them, consumed by their internal issues and mutual conflict, completely forgot about Maledia’s existence for a very long time.

Towns and villages sprouted across the island. The population grew, as the word about a safe kingdom for the cursed has spread across Karandia by members of the society who stayed behind on the mainland. Due to lack of any valuable resources, Maledia was and still is considered a rather poor nation. But prosperity was, after all, never the main priority of those who created it. Safety and rights for the cursed were their main goal and now, unburdened by prejudice, they’ve finally got what they wanted.


By the cursed, for the cursed
Modern Maledia is run by three Cursed consuls - light elf succubi Ashianna, orc lycan Gyrn and human vampire Adon. Each of them represents one of the three major curses and speaks on behalf of everyone on the island.
Gaining citizenship on the island is not an easy task. Everyone who arrives here in search for it, has to go through intense interrogations and needs to sign papers which demand rejections of any obligations to any other nation of Karandia. In some nations, such as Kraf, Avora and Southern Dornia, former citizens who moved to Maledia are considered traitors and can no longer safely return.
The laws of the island are strict but reasonable, seeking to protect both the carriers of the curse and those un-afflicted. There is a surprising number of people who are untouched by any curses living and working on Maledia. Most of them moved here accompanying their cursed relatives or friends, viewing separation as worse fate than a chance of getting afflicted themselves.

Vast farms grow thousands of domesticated animals for lycans and vampires to feed on, while succcubi satisfy their needs with help of local volunteers, as well as with help of a recent, experimental addition – the monster-farm. Maledia became one of the three nations in Karandia who managed to successfully ‘domesticate’ several P-type monsters. Technologies and specialists generously provided by Inginia, as a token of good will and stable relations between the two island nations.


Otorr
The capitol of Maledia and the main port of the island. A pretty large city with the highest population of non-afflicted residents and guests of the island. This is where the Boltania’s fort used to stand. But during the following thousands of years it has been expanded and built upon, so not a trace of its original shape remains.

Otorran farmlands
Right after the capture of the Boltania’s fort, settlements of the first Maledians were built here. Nowadays these vast plains are covered in agriculture fiends and animal farms, that feed the entire island.

Estera port
A small port town at an island visible from Otorr. Famous for a large lighthouse built in the early 103th century.

Qvinel
Town of Maledia with the largest population of Succubi. Home to the Qvinel’s monster farm, containing several types of ‘domesticated’ P-type monsters. Majority of Succubi population of this town visit this place weekly if not daily, enjoying the never-ending sex with the monsters and thus satiating the never-ending hunger of the curse. Most enjoy the process, of course.

Crimson mansion
A small town high in the mountains, reachable by only one road. On top of it stands a castle of tall towers, which serves as residence of Adon, the vampire Consul.

Lupin howl
A fortress built within the Lupin woods in the middle of 94th century. Serves as residence to the majority of Maledian Lycanthropes, who pride themselves as the main military force of the island. Here they provide combat training for all volunteers, and indulge themselves in wild hunts across the Lupin woods.
The fortress also homes a special army unit who organize constant patrols across the Western and Southern shores of the island. Considering the proximity of Eastern greenlands and the numerous orcish clans residing there, in the early years of Maledia there have been several successful attempts of especially brave clans to cross the waters and to raid the young kingdom.
Nowadays orcish clans from the mainland stay away from here. Folklore tales of ferocious beasts tearing orcs apart with their claws living on this island are common among the clans. Usually such kind of tales would rather inspire orcs of greenlands to challenge the beasts, but considering that orcish clans are notoriously allergic to sailing, very few attempts happened since.

Dreadwind wilds
Northern plains and forests of the island. Only a few villages are situated here. For unknown reasons these lands have a very poor condition of flora and fauna. Some areas here are almost entirely dried out, with ancient trunks of dead trees littering vast territories. For many decades eager scientists and mages of Maledia try their best to figure out the reason and to bring life back to this land. Some links this to the strange ruins found in the underground flooded tunnels leading towards Salty twins.

Salty twins
A couple of lakes with salty water. The water comes here and leaves via vast network of underground tunnels connected to the ocean. Rumors say that the rare explorers who tried to create a map of these tunnels found traces of colossal underground structures. Exploration of these ruins is an exceptionally difficult task, considering that for whatever reason there are no Underworld tunnels beneath Maledia.
edit delete