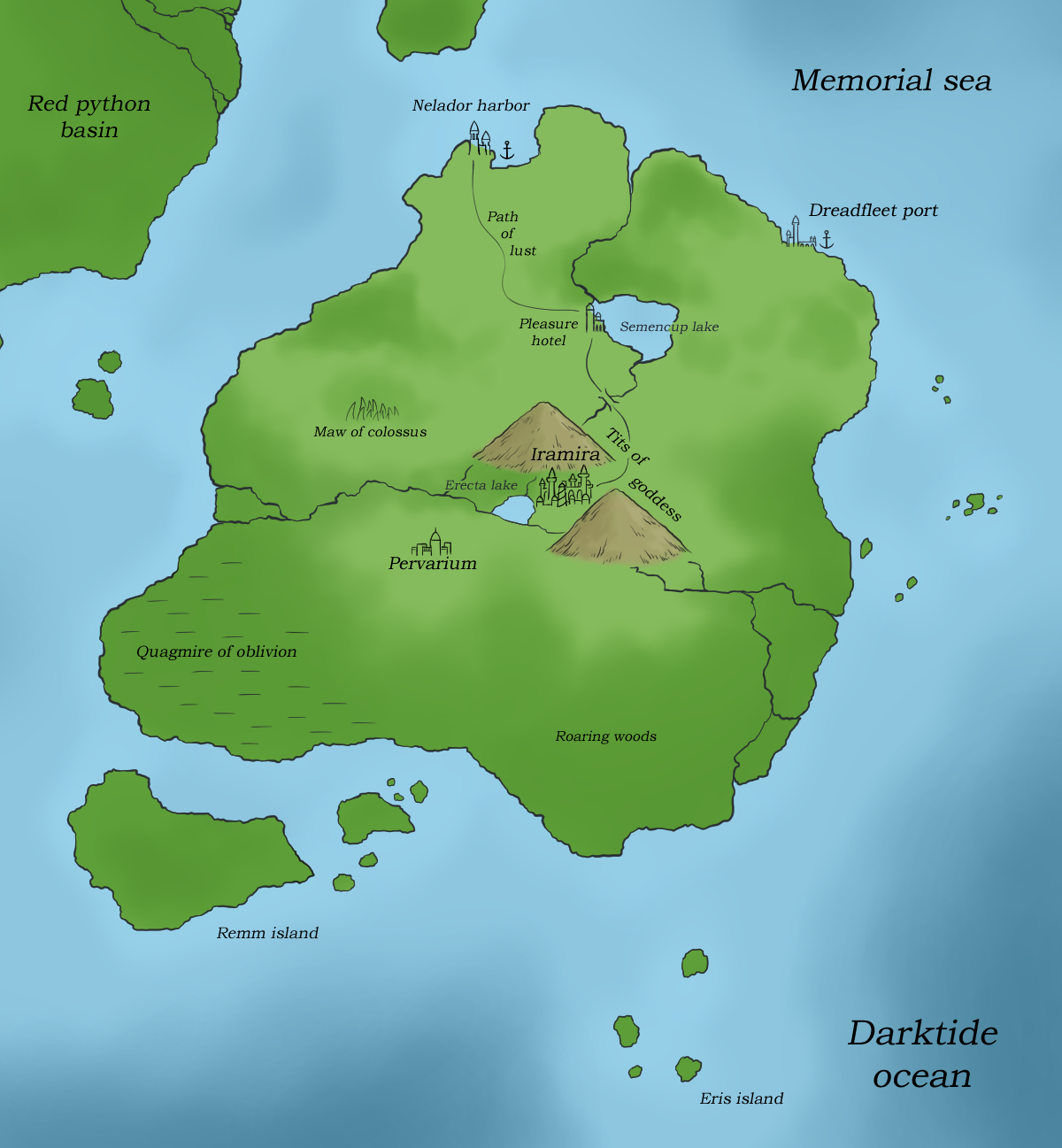 The origin
Before 105th century Ingi isle was uninhabited. Fully covered in dense jungle and populated by large number of dangerous beasts and monsters. Void of any valuable resources, it wasn’t attractive enough for established nations to colonize. Once upon a time a group of archeologists dared to trespass the jungle and their hunger of discoveries led them into the center of the island. What they’ve found there changed their lives and the continent itself. An artifact of unknown origin, which in the right hands could do the unthinkable.
Instead of bringing it back to the kingdom they came from, they kept it and with its power alone built their own kingdom. The power of the artifact is known across the continent only in form of rumors and gossips. That it can completely change the body of a person who touches it. We’re talking about the change of race, of sex, age, sound of voice, height, weight - any physical attributes that make a person who they are.
There are so many people who are unhappy with their physical appearance. There are also those who would give anything to start a new life, to kill their old self and become someone new.
The artifact of Inginia can do all of that.

After establishing a small base at the Northern shore, the former archeologists sent message to their former colleagues about their findings. Soon they have been visited by the skeptical and the curious, who witnessed the power of the artifact in action and in turn spread the news further, to nobles and kings of Karandia.
Guests from far-away lands sailed to Ingi isle, seeking the power of the artifact and of course carrying gifts and heavy chests of gold as payment for the kindness. Year after year the artifact’s popularity grew, and so did the price of its use. The explanation was simple – the more people would know about the existence of such treasure, the higher was the chance that somebody would try to steal it or take it by force. The former archeologists needed to hire guardians. They needed to build fortifications. They needed to protect their treasure at all costs.

Decades later Ingi isle changed entirely. Vast sections of the jungle had been cut down. There now were roads, outposts, army, fleet. The large island became a fortress itself. Its culture was pleasures, satisfactions, wealth and prosperity. Ingi isle became the home to the one and only of its kind – a sorority kingdom.
Modern Inginia is shrouded in mystery and rumors. Nobody knows what the leaders of Inginia look like, what are their names, how can one get an audience with them. Some of the rumors speculate that the former archeologists who found the artifact thousands of years ago are still alive and rule the island from the shadows.
Other rumors touch the content provided by the island. That for those with higher level of trust the island opens access to entertainment of forbidden, depraved nature. Things that would be considered over the top even in Kraf.
But what happens in Inginia, forever stays in Inginia. Your darkest desires will be fulfilled, your dreams will come true, your very being will change. If you can afford the price.

The sorority kingdom
Modern Inginia can be rightfully considered the most prosperous kingdoms in all of Karandia. Wealth and gold stored in its treasuries could make even the banks of Sahangal blush and feel pool. Beautiful gardens, breathtaking vistas, hotels, pleasures of the flesh, blood sport arenas, domesticated P-type monsters, the most beautiful servants with proportions and curves beyond one’s imagination, ready to do anything a guest desires, and even more. Much, much more.
But nobody can simply sail to the shores of Inginia and set foot on its shores. To attempt that means to become the target of local army, tirelessly patrolling both land and waters around the island. Anyone caught trespassing would be immediately executed, no matter the status or lineage.
To get anywhere beyond the docks of Nalador harbor the visitor needs a ticket, purchased for a price unreachable to simple mortals of Karandia. The ticket grants access to the entire isle for a limited period of time but also opens doors to the entire isle.
Though the ticket covers only the pleasures of flesh and soul. To gain access to the Tower of rebirth, one has to pay extra fee. This is the new home of the Inginia’s greatest treasure. The artifact of rebirth.

Enigma
It is impossible to gain citizenship of Inginia. The core population of the island is relatively small, but it does not accept anyone into their ranks, no matter how valuable they would be, how much wealth they would offer. The core population of Inginia seems to always remain under certain number of residents – just enough to fulfill duties and provide services for the guests. How and where from does Inginia recruit soldiers for their army and navy? Where does it get its servants, performers and workers? And most importantly, who are the rulers and why nobody can ever gain an audience with them? All of these questions remain unanswered.


Nelador harbor
The only port of the Island that accepts visitors. Ships are allowed to dock for trade and in case of emergency, but to gain access into the town itself one has to buy a ticket in special offices, situated close to the docks.

Path of Lust
The main road of Inginia, safe and clean way of getting towards the main destination – the capitol. Nalador guards provide transport of the visitor’s choice. They could take one of the trained horses, one of the few domesticated riding beasts or to relax in a chariot driven by an Inginian coachman.

Pleasure hotel
Following the Path of lust, it usually takes full day to reach Iramira from Nalador harbor. Pleasure hotel standing at the bank of Semencup lake offers shelter and rest to those who are not in a rush, and offers a taste of pleasure that will be available in the capitol the next day.
Concubines of every sex, orientation, shape and race are ready to please the guests all day long. Beautiful gardens provide relaxation and serenity. Unlimited access to food and drinks of the highest quality and rarity.
It is not uncommon for some guests to never reach Iramira during the access period of their ticket. Spending all of it here instead, in the Pleasure hotel.

Tits of goddess
Quite similar in size and shape, these twin mountains carry a truly fitting name.

Iramira
The capitol of Inginia and the true jewel of the sorority island. Built right in between Tits of goddess, touching the bank of beautiful Erecta lake, this city has everything a spoiled pleasure-seeker could dream of. Taverns, theaters, gladiator arenas, brothels, hippodromes, bath and game houses, rarity and slave auction houses and many other similar establishments are so numerous in this town that one wouldn’t be able to visit each of them in a week.
In the center of the city stands the Tower of rebirth. A person who is willing to go through the ritual of rebirth has to ascend it naked via a spiral stair outside the walls of the tower. This ritual exists as inspiration for other guests of the island, as they can witness the person who enters the top of the tower, and then the same person but in a different body, the one they’ve chosen to create themselves while inside.

Pervarium
Before Inginia became the gated fortress with strictly limited access, owners of the island managed to recruit a solid collection of monstrologists and scientists who specialized in domestication of monsters.
Behind the walls of Pervarium they’ve received limitless funds and resources and has been tasked with only one goal – to domesticate as many P-type monsters as possible. After centuries of experimentations they’ve had numerous successes.
Guests who are eager to experience sexual pleasures with these monsters can make a short trip to this town and to try them out.

Maw of colossus
One of the most fascinating sightseeing’s on Inginia. The curious formation of sturdy rocks appear in shape of colossal toothy jaw, poking out of the ground. Residents of Inginia would never deny or confirm if these teeth are real or not. But regardless of that, the size of these structures send chills down spines of anyone who witnesses them.

Quagmire of oblivion
While the ticket gives access to the entire island of Inginia, locals always warn visitors from approaching this place. This is one of the few remaining areas with high presence of dangerous predatory monsters. And on top of that, the gas emitted by the swamp has a dangerous hallucinogenic effect on anyone who breathes it in.
To go deep into the Quagmire of oblivion is to most certainly never return.

Dreadfleed port
A closed port of Inginian naval fleet. From here heavily armed ships patrol the waters surrounding the island to drive away anyone who approaches too close without permission.

Eris island
The most Southern patch of land of Karandia continent. That’s about it.

Remm island
This tall island of unclimbable walls is covered in jungle and is declared a forbidden territory by Inginian fleet. But while for the longest time it was believed to be uninhabited, sailors of ships passing by claim witnessing lights and movements within the jungle-covered top of the island.
The most popular rumor says that on top of this island stands residence of the true masters of Ingnia. But of those who were stupid enough to try and climb it, nobody has ever returned.
edit delete