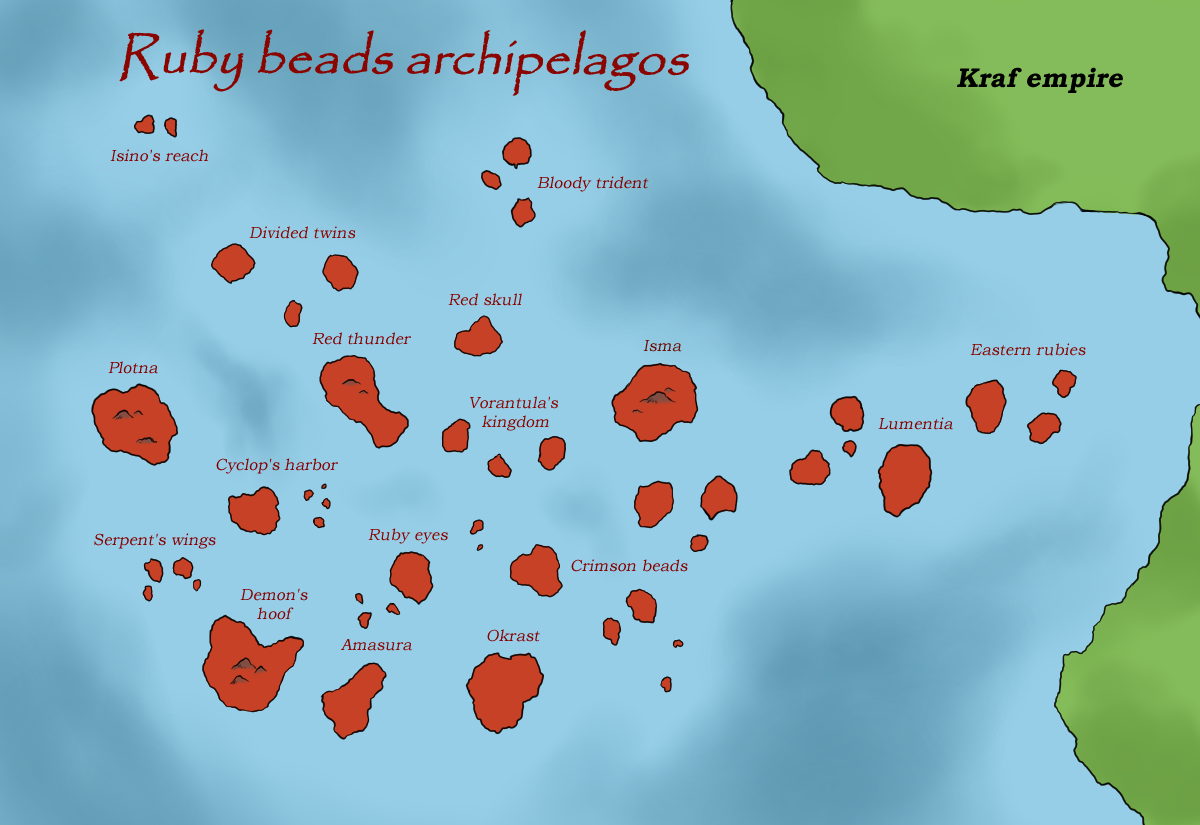 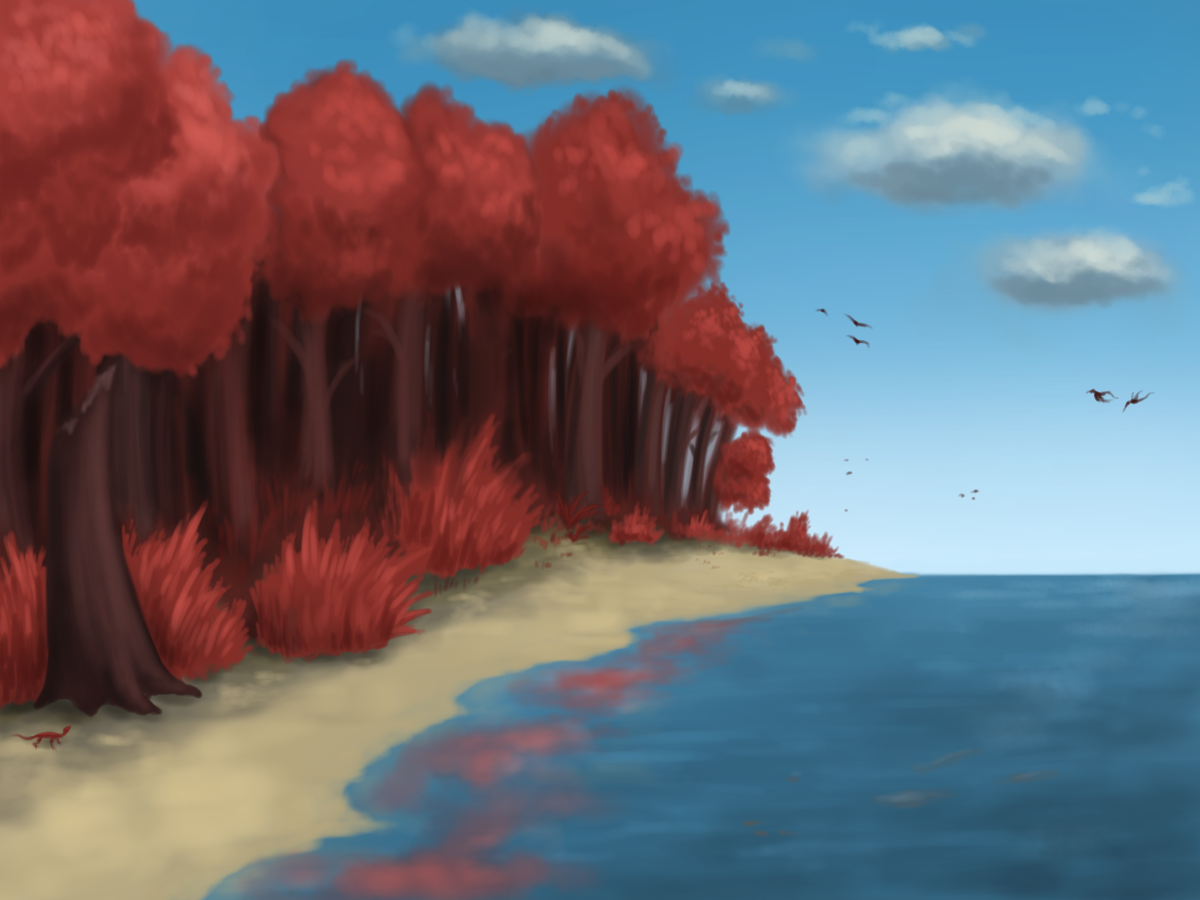 To the North-West of Ik’sumar lies a group of small islands with a very unusual ecosystem, where every living organism is colored in different tones of red, orange and to small extend purple. Mammals, birds, monsters, reptiles, insects, plants - everything is affected by this. These islands carry the name of Ruby beads archipelagos.
The reason of such strange domination of a single color in natural environment is a mystery. One of the most popular theories claims that it could be a curse from ancient times, when a forgotten civilization committed unimaginable atrocities on these lands and was swallowed by the ocean long before the Great collapse. This theory is often backed up by high number of ancient ruins found on the isles and in the surrounding waters. Within those ruins were found numerous carvings with disturbing imagery of bloody rituals and acts of violence.
Another popular theory tries to connect this anomaly with Tamir’s Crystal dust desert, assuming that it could be a result of an unknown, absurdly powerful spell, which left a lingering after-effect.

The “reddening” scares off many potential settlers and explorers from even considering visiting this place. Some even believe that the air here is toxic and would slowly kill any outsider, despite the fact that there were already enough brave or desperate individuals who visited the isles and some of them even settled down for good. However, the red pigmentation affected even them, or to be more specific - their generations. Any child born on these isles would definitely have red hair and more reddish skin tone (With the only exception of dark elves. Their colorless grey skin seems to be immune even to this effect. Only the hair color is affected). This color scheme remains for the rest of the owner’s life, even if they would leave the island in young age and would never return. It doesn’t spread any further, that’s why it was concluded that the reddening could only happen on the isles. This rule works for the flora and fauna as well, as great number of local species can be met in other areas of Karandia, in their more traditional colors. 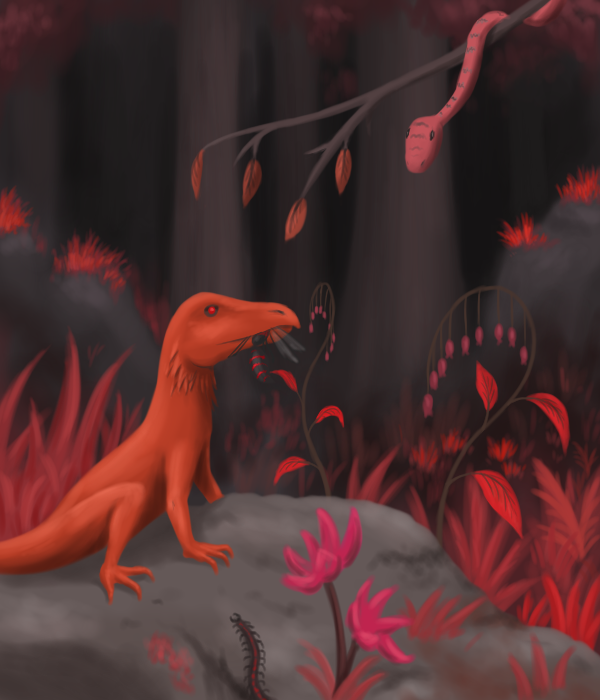 There is a relatively low number of large predators and monsters who could be considered a serious threat to human life. However, for the last couple of centuries the number of monsters increased with growth of local population.
There is no large government on these isles. Each inhabited island usually has a town and several villages with their own form of ruling. Large scale conflicts also avoid this part of the world. Of course small disagreements and local brawls happen once in a while, not to mention pirates, who happen to sail into this part of the world, but other than that, Ruby beads archipelagos could be considered a little heaven of Karandia. A heaven with an unusual price.