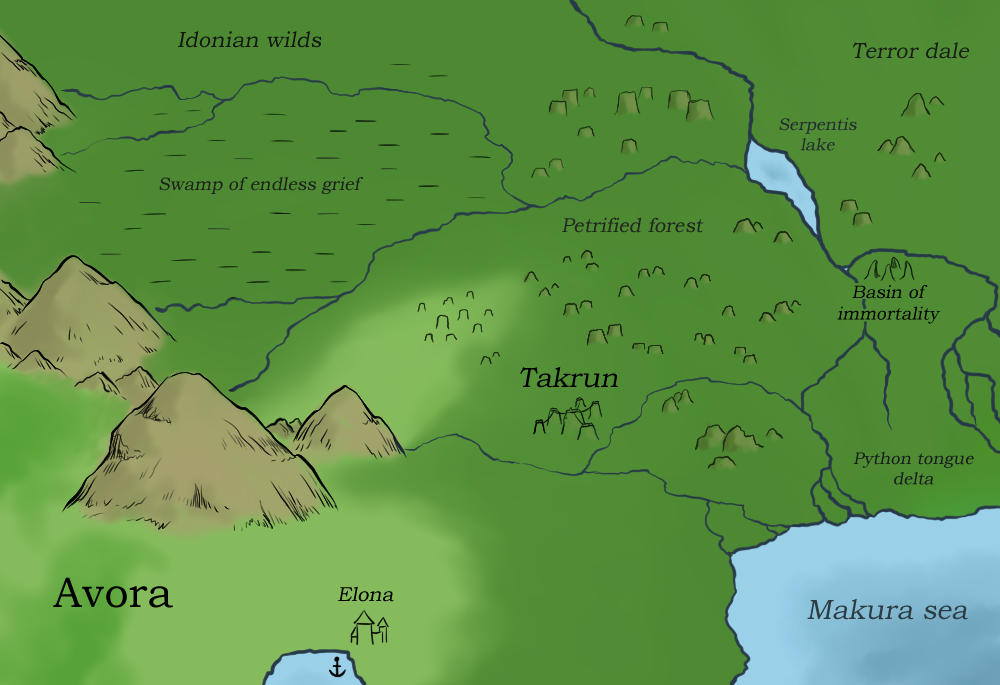 A city of adventurers at the doorstep to hell
Red python basin was always known as the largest most dangerous area in Karandia. Fully covered in jungles and swamps, it hides a lot of secrets, guarded by predators and monsters of unmatched ferocity and power.
The size of Red python basin serves as one of the key factors in the difficulty of its exploration – simply reaching the border of this land is already a challenge. Misty prairies to the North are filled with wild humanoid tribes, highly hostile to any trespassers; Dornia’s border with the basin is controlled by the followers of Purifying light church, intolerant to any non-human races and to any forms of magic; and finally there is Makura sea, a dangerous body of water inhabited by numerous sea monsters, some of which often dare to attack large battle ships.

However, curiosity and greed can overcome any obstacle and throughout the millennia’s countless adventurers, treasure hunters, scientists, archeologists, monstrologists and other curious people with dampened self-preservation instinct arrive here in desperate search of wealth, discoveries and answers. Most of the time they only find their doom, but sometimes, rarely, someone gets lucky and makes a breakthrough discovery. Such events add fuel to the flame of curiosity and invigorate future adventurers to try and find their own success.

Among such lucky adventurers were wood elf twins, Vrinin and Elzia Ersimers, who in the first half of 77th century discovered ruins of an unknown civilization in the Upper Terror dale. Some of the artifacts they brought from there caught attention of Avoran royalty and the twins were offered a huge sum of money for them. But instead of retiring with the newly acquired fortune, the twins decided to use it for a different, in their eyes noble goal – to take Red python basin exploration to a new level by establishing a safe base within it. A neutral ground where everyone would be welcome, no matter what part of the continent they arrived from. Something that no royalty on the continent would do, considering it a waste of time and resources.

In the middle of 77th century atop one of the mountains within the Petrified woods the construction has begun. The place had a perfect strategical advantage – rising above the jungle, it was unreachable to most monsters and predators. Forests on top of the mountain were used as building materials, while earth mages created tunnels and halls within the mountain itself. Powerful lifts were constructed to safely deliver visitors up into the town and back to the jungle. With time neighboring mountains were also claimed by the city and at present day it covers 5 of them, each connected by bridges.

With every passing decade the city of Takrun grew larger in size and population. Its economic influence also expanded, as the city established a complex but effective economic rules. Adventurers, monster and treasure hunters could easily sell their trophies to the city, who then resold them for higher prices to trade representatives from other kingdoms. This system created comfortable conditions for hunters and rid them of headache of buyers for their trophies themselves. Meanwhile the city’s expanding treasury allowed it to establish more and more risky, profitable deals.

By the end of 78th century Avora officially acknowledged Takrun as an independent kingdom, soon followed by others nations of Karandia.

Takrun
The city-kingdom covers tops of five mountains. It offers shelter to anyone and serves as base of operations for countless adventurers within Red python basin. Tools, weapons, provision, enchanting and alchemical materials, gear – all of that can be bought here for a fitting price.
The city is ruled by a council of five nobles, each representing interests of the following kingdoms – Avora, Ik’sumar, Dornia, Inginia and Principalities. But while most important decisions are being voted on by them, their power is restricted by ancient laws, which ensure sovereignty of the kingdom.

Elona
Established in 81st century by combined forces of Avora and Takrun, this port town is used for international trade and holds a large garrison of mercenaries who offer protection services to Takrun and back.

Petrified forest
A vast region in central Takrun littered with large rock formations with near-horizontal slopes, resembling trunks of colossal petrified trees. The name of the region comes from a legend, saying that these rocks were once real trees which turned to stone and shattered during the Great collapse. Some scientists believe that the legend might not be far from truth.

Swamp of endless grief
The entire area between two major rivers that carry water from the Peaks of the world is one giant swamp. Completely uninhabited, this accursed swamp is brimming with highly dangerous predator monsters. There is always a chance that something of value lies beneath these muddy waters, but trespassing it is so difficult and dangerous, that only the insane would ever attempts to try.

Idonian wilds
This vast jungle lying at North-Western corner of Red python basin is only slightly less dangerous comparing to the depths of the basin, but surprisingly enough it is inhabited by numerous small tribes and even isolated city nations with unique cultures and even races. Not much is known about people who live here, as they act extremely hostile to any outsiders. Diplomatic attempts have been made by Principalities, Dornia and even Ik’sumar in the past, but each of time they resulted in disappearance of the delegations without a trace.
Nowadays civilized nations do their best to avoid this part of the continent and only select overconfident individuals venture into these lend to learn their secrets. Never to be seen again, of course.

Basin of immortality
One of Karandia’s great anomalies. Found deep within the jungle stand four artificially created stones or unknown origin, forming a 100-meter diameter circle. Any living creature, except plants, who enters the area between the stones is affected by a strange phenomenon – their brain would keep functioning no matter what damage their body would receive.
After being discovered in 82nd century, numerous scientists and mages performed experiments here in attempt to solve the mystery of the stones. The results of these studies are stored in the archives of Takrun and Ribera with the highest level of restricted access. They are believed to be so horrific in their nature that could easily drive an unprepared mind insane.
edit delete