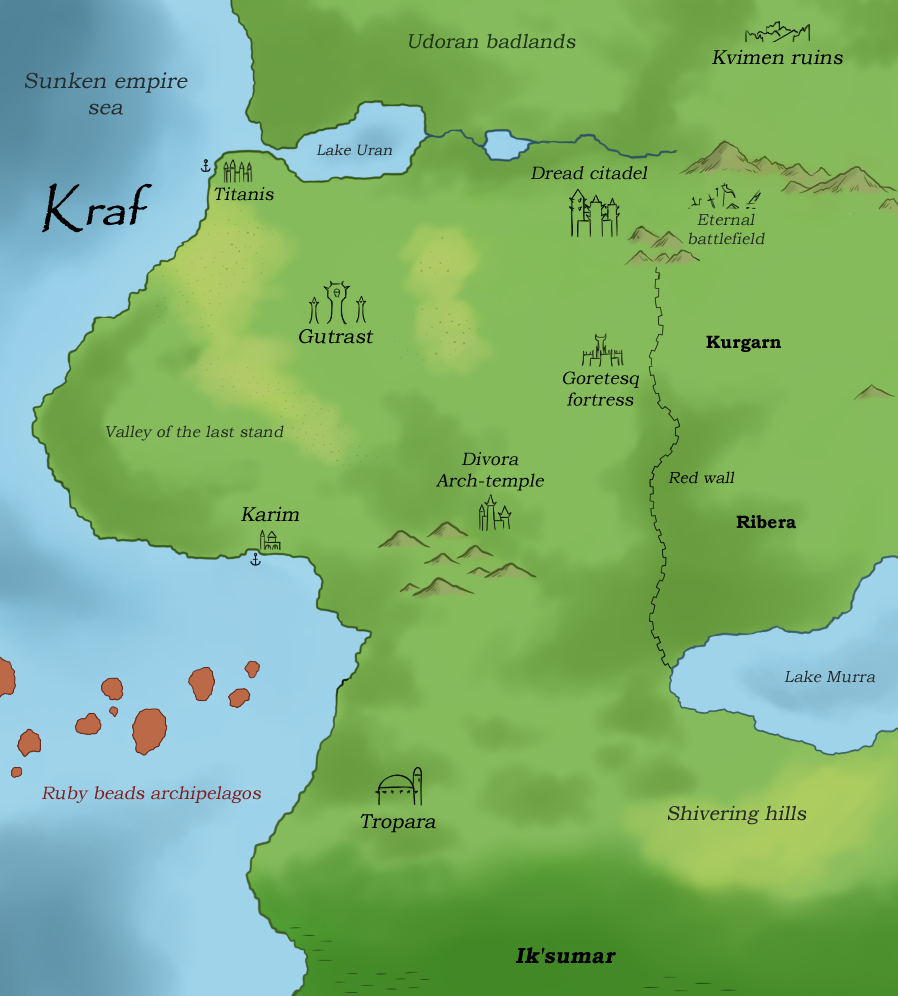 The bad apple of Karandia
Kraf empire is easily the most unstable and volatile nation in Karandia. It exists in the permanent state of unrest, ever seeking conflict with its neighbors or within itself. Years of peace in Kraf could be counted on fingers of one hand, and were usually considered as times of stagnation.
Gladly for Karandia, internal conflicts happen here much more often and keep the warmongering nation fully occupied. Time to time over-ambitious self-proclaimed emperors pop up here and there, claiming rights for the throne of Gutrast. This causes division within the population and leads to long and bloody power struggles.
But when a relative peace comes, Kraf always would gather an army an attempt to invade one of the neighboring nations. Their army is strong and their knowledge in magic is respectable, however their bloodlust often leads to recklessness – they do not like long and tactical war campaigns. A swift but loud and bloody battle is what they live for.

Geography
The extend of Kraf empire’s influence changed a lot throughout the history. The golden age of its expansion comes at the end of 90th century, when its border came dangerously close to Ik’sumar on the South, to the shores of Ghost sea on the North and to the gates of Ebon forge at the East.

Current state of Kraf empire could only be described as severely weakened. A devastating civil war on 123th century between Kraf and its former Northern region Udor in Western greenlands led to arguably the bloodiest internal conflict in the empire’s history. And while Udor has been completely wiped out in the process, the empire itself was left severely weakened, losing major part of its army, talented commanders and mages. To this day Udoran badlands stand mostly abandoned.

Culture and religion
Surprisingly enough, with Kraf’s love for conflict and violence, there is no real racism within this land. Representative of every race and sex can achieve greatness and success in this land, as long as they possess the one true value – power. Be it combat skills, wit or powerful magic, for as long as the person can dispose of those who stand in their way and are good at avoiding daggers aimed at their backs – they may consider themselves proud citizens of Kraf empire. Here the strong rule the weak and do whatever they wish to them.
The weak do all the hard work. Those who have potential to growth are hired, but those who are considered hopeless, including prisoners of war – are turned into slaves. Slavery has a special place in Kraf society. Not only slaves are used for all forms of labor and pleasures, but also as religious sacrifices.

To fully understand the aggressive mentality of Kraf, one should first understand their religion, which plays the most significant role in their view of the world. The origin of Divora cult takes place shortly after the Great collapse. After most of the ancient empire’s territory have been swallowed by the ocean, what left of the population had to flee into the Valley of the last stand, a vast prairie untouched by the cataclysmic blast. However, the influx of refugees from other lands brought ever increasing numbers of monsters, and for decades the survivors had to endure unimaginable hardships and losses. But not all who witnessed atrocities committed by monsters, saw them as a bad thing – some saw clarity in chaos. Born in those difficult times, the teaching of Divora stated that the Great collapse was a punishment to the world for sins and that monsters were their messengers.
Followers of Divora believe that every living creature has to struggle to survive. That conflicts and violence are the necessary elements of life, while peace is an alien, otherworldly concept which has to be earned through struggle and can only be fully experienced in the afterlife. People of Kraf seek satisfaction through bloodshed and obscenity, reaching the furthest levels of degeneracy - the strong enjoy their existence while the weak suffer and perish in the process.
To them peace in physical reality is only acceptable for a short time, just enough to recover strength or to heal wounds. A pause to prepare for the new great deeds. After all, it was the absurd amount of peace that caused the Great collapse, that the world grew too stagnant and had to be shaken. And that monsters were sent to help to keep the further stagnation at bay.

Even sacrificial rituals in Kraf are not what they seem to be. Slaves and captives of war are not brought to altars naked and helpless. Instead, they’re given weapons and forced to fight for their survival against monsters or soldiers of Kraf. Motivated by the chance of winning their freedom through continuous victories.

The dark emperor
During the golden age of Kraf empire, when in the end of 90th century its influence peaked and its territories spread the furthest in history, three large rebellions ignited in different provinces at the same time and led to a full-scale civil war. In the midst of chaos, the emperor has been assassinated and the throne has been usurped by the new leader - The dark emperor.
Till this day this mysterious figure keeps his unshaking grip at the throne, controlling events within the empire through clever manipulations and schemes. Nobody knows how he looks or what his real name is. During the last three thousand years, countless rumors and legends grew around the mysterious persona. Some of them try to explain his origin, pointing out at a dark elf man who has been banished from Ik’sumar for unspeakable crimes.
Unconfirmed theories state that the dark emperor was responsible for all three rebellions leading to the civil war of 90th century, and that they played the crucial part in his plan of usurpation of power.
But of all legends, one instills the greatest fear in anyone who would ever ponder about the possibility of pretending on the Kraf throne. That the dark emperor spends little time within the castle and prefers to travel around the kingdom and directly influence events that keep it in the constant state of ‘controlled unrest’. That he has a secret army of spies and assassins, who would eliminate anyone at his whim.
It is impossible to say what is true and what is not, but the combined might of these rumors and legends creates a mythical, nearly godlike image of the current emperor of Kraf. A man who seeks no personal fame or recognition, but who loves power and would stop at nothing to keep it.

Gutrast
Capitol of Kraf empire. The emperor’s palace towers over the city in form of a colossal construction. The identity of current emperor is unknown, as pretenders frequently overthrow each other in the endless intrigues and conspiracies. Hundreds of slaves are delivered here monthly and nobody know what happens to them inside.

Divora arch-temple
The main religious center of Kraf empire serving as both school for upcoming priests and a center of religious celebrations. The most notorious celebration happens here each July and involves hundreds of slaves sacrificed to captured monsters in spectacular battles. This ritual is meant to satiate nature’s fury and to postpone another global cataclysm.

Dread citadel
One of the most well-fortified citadels not only in Kraf but in all of Karandia. Serves as base of operations in the never-ending war against Principalities.

Titanis
One of the two major ports of Kraf empire, mostly focused of fishing and combating pirates of the Coiled princess island.

Karim
This port is used by Kraf empire to organize slave-hunting raids into distant lands of Karandia and isles of the Sunless ocean. The ships tend to avoid Ruby beads isles as citizens of Kraf fear its crimson curse. This fact makes life on these isles somewhat safe.

Goretesq fortress
One of the most frightening places in all of Kraf. The city is infamous for the most inhumane conditions for slaves. Here Kraf scientists and monstrologists conduct countless experiments in attempt to create new species of monsters and beasts which could be used as weapons.
A few of the existing predators roaming the wilds of Karandia might be the failed results of such experiments who’ve managed to escape or, what is also possible, have been intentionally let loose.

Tropara
The most distant settlement of Kraf empire, built on the border with Ik’sumar. Originally it served as an outpost preventing possible intervention of the dark elves, but now it only serves as a base for slave-hunters, mostly focused on hunting dryads of the Shivering hills.

Kvimen ruins
Ruins of the largest city of Udor, destroyed by the royal army in 123rd century during a massive uprising of the Western greenlands provinces. After Kraf forces were pulled out of the region, many survivors returned here and live within its ruins, slowly rebuilding the city. Majority of current Kvimen population express strong desire to join Principalities as a new precent, but so far were unsuccessful due to complicated geographic location.

Valley of the last stand
Numerous towns and villages littering this part of Kraf might be considered the calmest and safest places to live in. Major events, rebellions and internal conflicts rarely reach this part of the empire. Not to mention a rather low presence of predatory monsters in the surrounding wilds.
edit delete