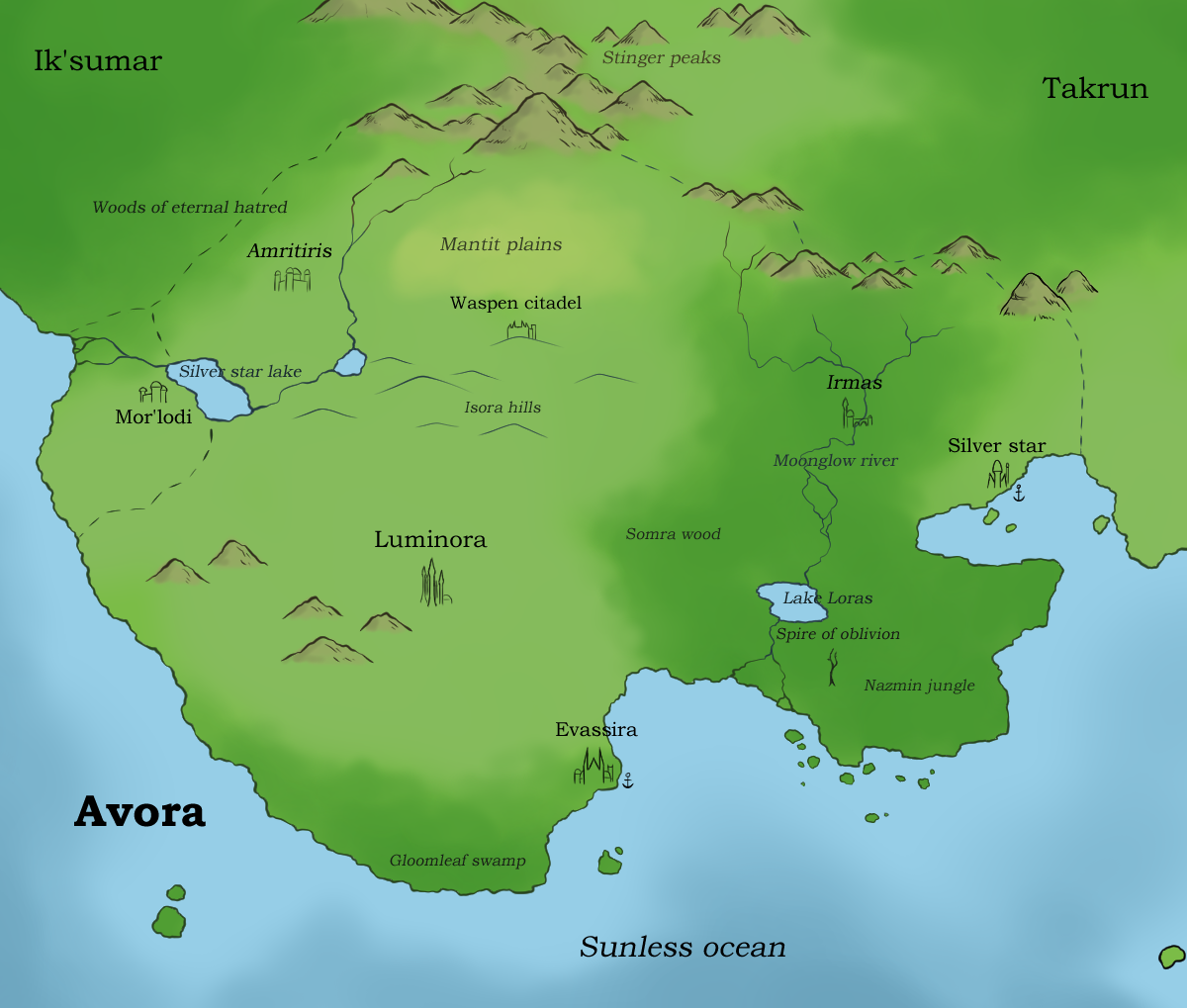 Avoran duty and pride
When asked about Avora in any other corner of the continent, you are guaranteed to hear one out of three things – they barely tolerate outsiders, they hate dark elves and they produce the best wine on the continent.
Light elves form the majority of population of Avora and being naturally proud people, they value order, duty and subordination above all else. Each light elf no matter the sex, upon reaching 20 years old gets enlisted into the Avoran army where they serve for at least 3 years. Injuries, disabilities or criminal past do not save one from the enlistment – anyone would be assigned a role that fits their abilities and talents.
Despite the similar total-enlistment system practiced by Kraf empire, Avora does not use their army for conquest. To them this is merely a measure of survival, since light elves are known for very low birth rate comparing to other nations. Because of this the number of casualties among grown-up Avorans is much lower than in any human or orc nation, thanks to fighting skills and training of willpower they get during their 3-year-long service.

Relation with dark elves
There are no observable reasons why light elves should hate dark elves and vice versa. Both races are closely related and can even have children with one another. But in Avora the hatred of dark elves has near-religious power. From early years light elves are taught about horrible nature of the related race, often describing them as sources of amorality, corruption and violence. It is important to point out that unlike Ik’sumarians who despise Avoran elves exclusively, but not the race of light elves in general, in Avora the situation is reversed. One of the most important Avoran laws existing from before the Great collapse states that any dark elf trespassing into the kingdom should be killed at any opportunity and even assumes rewards for presenting proof of such deed to authorities.
The roots and reasons of this hatred are unknown, but it exists the entire history of the kingdom. So called First elven war that took place in 17th century was the first documented large scale conflict with Ik’sumar that ended with Avora’s victory in the Woods of endless hatred. During the following twelve thousand years the conflict reignited at least 13 times each time resulting in numerous casualties on both sides.

When it comes to balance of power, Avora has a much stronger army than Ik’sumar but a complete victory in the conflict was always out of its reach. Ik’sumar jungle is unforgiving and serves as natural protection from full-scale invasions to dark elves, who adapted to and feel comfortable within it.

Relation with other races
While dark elves are forbidden in Avora, other races are merely tolerated. With exception of Silver star city where the law is equal for all races for the sake of sustained trade relations, orcs and humans should think twice before venturing deeper into the kingdom. Numerous rumors circle outside of Avora about cases where guards and authorities of Avoran settlements closed eyes on injustices caused to outsiders. However, it is debatable how much truth these rumors have and how strong the Avoran propaganda really is.
The curious case of Mor’lodi province, which separated itself from Avora because of warming relations with Ik’sumar serves as a good example against the stereotype of light elves hating dark elves being a natural phenomenon.

Wood elves have a much better time in Avora. They can serve in its army and gain citizenship but even they have limited access to some places in the kingdom. For example, the royal palace in Luminora and the city of Evassira are closed for them no matter how famous of influential the wood elf might be.

Luminora
The capitol of Avora. This ancient city was already large and beautiful when the Great collapse happened and it withstood the cataclysmic event almost intact. During the twelve-thousand-year history in the new era the throne of Avora only changed three rulers. Current elven king Anatorian rules for already three thousand years.
Of all nations on Karandia Luminora is considered the oldest city as the Great collapse spared numerous documents from the Lost age. According to some of them the city exists for already twenty-one thousand years.

Amritiris
This city of warriors was built after the end of the First elven war in the 17th century. This colossal citadel of military and magical schools serves as the main base of Avoran elves in their never-ending operations against Ik’sumar. Every light elf of this kingdom, be it a man or a woman, visits this place at least once in their life during their 3-year long military service.
Joining and serving in the regular garrison of Amritiris is considered the greatest honor in all of the kingdom and the veterans who’ve spent here more than fifty years, are granted near-royal privileges. From this city Avora launches their numerous expeditions and raids into the Ik’sumar territories in attempts to weaken and conquer their ancient foe.

Waspen citadel, Stinger peaks and Mantit plains
Following the simple rule of nature, P-type monsters mostly dwell in populated areas, where they have easy access to their desired prey. Thanks to high concentration of elven population the kingdom became an attractive place for several types of monsters who hunt elves exclusively.
One of the most notorious among them, Yellow mantit, dwells in Stinger peaks. Each year these monsters swarm across the land, capture any elven women they come across and carry them to their hives for breeding purposes.
By the end of 72nd century the situation became so dire that the king of Avora ordered formation of a special force and construction of a new citadel, dedicated at eradication of these monsters.
A large garrison of specially trained warriors and mages stands ready to fight against Yallow mantits and periodically organize expeditions through Mantit plains to cull the numbers of monsters and to rescue the victims.

Silver star
Silver star serves as the main center of international trade for Avora. Countless ships from Inginia, Tamir and Dornia arrive here all year long, while established land routs connect Avora with Takrun.
Unlike any other city in Avora, Silver star has its own set of laws regarding representatives of other races and citizens of other nations. In short, light elves here don’t have their usual privileges and outsiders here are much better protected by local authorities than they would be anywhere else in the kingdom.

Irmas
Somra woods is not the safest place to travel through that’s why it was in Silver star’s highest interest to provide a safe route for foreign goods to reach the rest of the kingdom’s territory. This is a large citadel based around a bridge over the Moonglow river. Local garrison tirelessly patrols surrounding lands, hunting down dangerous monsters, beasts and bandits.
In many ways Irmas served as inspiration to Dornia’s Trade path of Kamus, as it plays the same role in the kingdom’s infrastructure.

Evassira
After the Great collapse Luminora saw a large influx of refugees from many surrounding lands, including humans and orcs. Centuries later proud light elven nobles found this inflation of foreign cultures as a threat to their own, that’s why in 7th century Evassira was build. This city is considered the center of Avoran culture and nobody except light elves is allowed to even enter it.

Mor’lodi
A small separated kingdom of light elves gained its independence in 119th century after a short civil uprising. Surprisingly enough the reason of it was a romance between local ruler Kirian Starsong and a dark elf woman scout he accidently ran into during a monster hunt.
Tired from the constant propaganda of hatred towards dark elves, the noble declared his city open for representatives of this race and sent ambassadors into Ik’sumar with an offer of peace. Needless to say that Avora’s reaction was immediate and an army have been dispatched to arrest Kirian and to take over control of Mor’lodi.
Unfortunately for them these events took place during the yearly mating season of Yellow mantits and the army had to be called back to fight the menace. This gave Kirian and his new allies enough time to mount a solid defense. This was not a difficult task as Ik’sumarians used the chance and sent a small army of their own to assist the unexpected ally and to gain a new foothold within former Avoran territory.
The following attempts to invade Mor’lodi lands by Avora had little success and to this day the rulers of these two kingdoms exist in a state of cold war with occasional conflicts happening on the borders. Avora forbids its citizens to travel into Mor’lodi and any visitors from the country are considered criminals.

Nazmin jungle
A very dangerous jungle at the North-East of the kingdom, inhabited by high number of monsters, including several S-type, unique to this area.
The jungle gets increasingly more dangerous in the peninsula part because of a very complicated landscape, full of tall hills and deep crags. This is one of the rare jungles where dendrasectoid parasites can be met, similar to Kifir and Red python basin.
It is also a home to one of the famous Karandia’s anomalies - the Spire of oblivion.

Spire of oblivion
Deep within Nazmin jungle stands one of the rare anomalies of Karandia – the Spire of oblivion. First found in 24th century, this strange metallic construction attracts scientists and adventurers from all over the world.
Surrounded by piles of skeletons and fresh corpses of animals and monsters, this spire constantly radiates strange magic, affecting all living organisms. Explorers who tried to study this phenomena report that the spire’s effect pacifies anything that steps closer than one kilometer to it. Even the most ferocious monsters become peaceful and wouldn’t attack other creatures. Humanoids are not exception to this effect.
The danger lies in the subtle escalation if this effect on those who spend prolonged time within the area. Over-exposure leads to increasing apathy, loss of coordination and disorientation. Later the creature falls into coma and in the end dies from starvation. Countless creatures feint and die from hunger after staying around the spire for too long. At the cost of many lives explorers figured out that the maximum time one can stay within the area before it becomes dangerous was not longer than twenty minutes.

Unlike with other anomalies of Karandia which are very poorly studied, scientists more or less understand how the Spire of oblivion works. The entire metallic construction is a solid enchanted object. The strength and distance of magical effect here are perfectly balanced with its ability to replenish energy – all the same principals used in modern enchanting, except for the colossal scale.
The questions of who built it, how did they manage this and for what purpose still stand.
edit delete