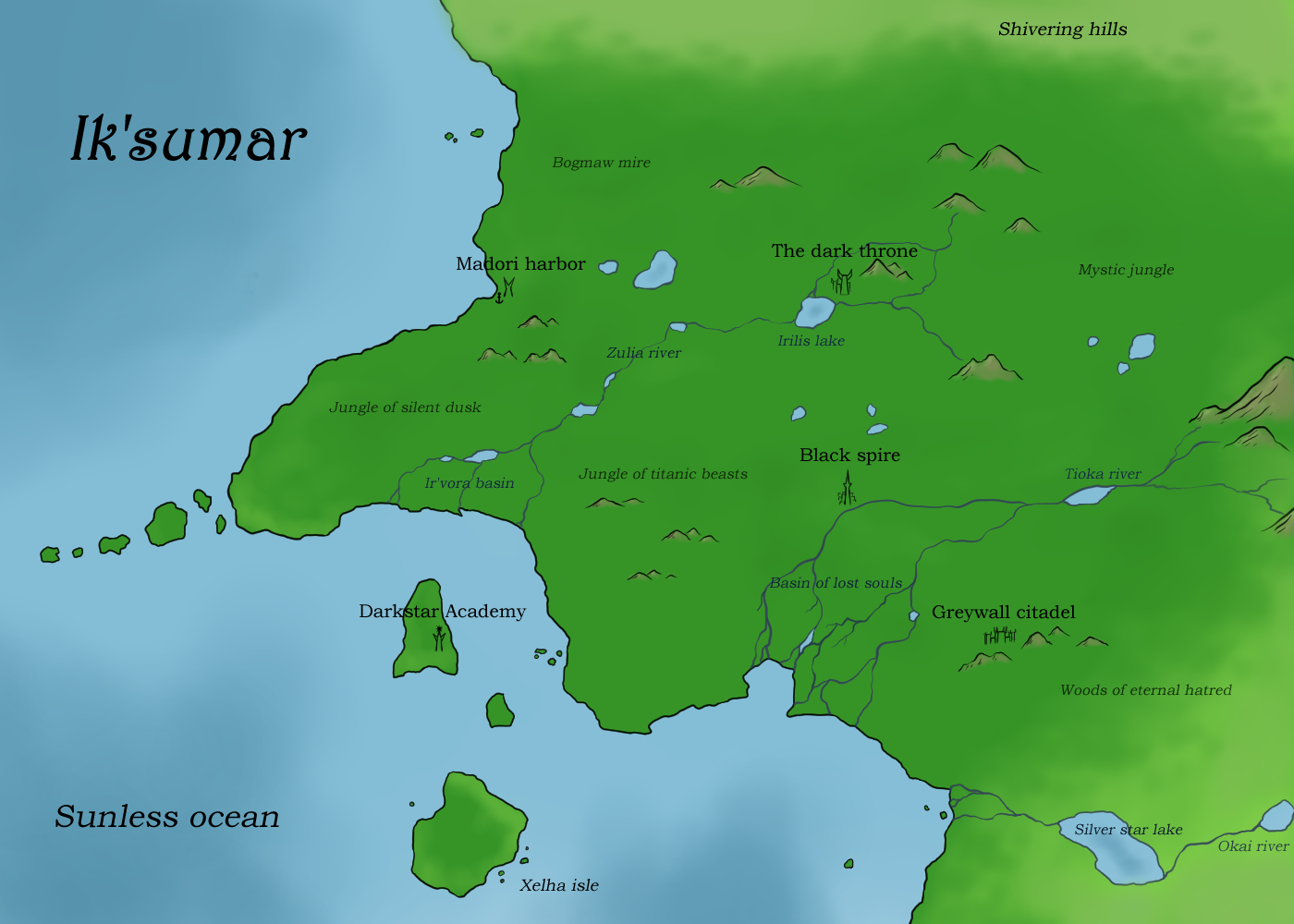 
Jungle as the greatest ally
Ik’sumar is an ancient kingdom of dark elves, lying in the heart of a tremendously dangerous jungle in the South-West of Karandia. It is unknown if dark elves chose to live here intentionally, or the nature itself changed around them after they’ve settled down, trapping them in a deadly embrace of claws, fangs and tentacles. Since the Great collapse, more than twelve thousand years ago and possibly even before it, dark elves successfully adapted to the harsh conditions of this land and proudly rule it with iron fist and powerful magic.
The kingdom has no particular borders or outposts as the nature itself serves as the kingdom’s trusted protector. Any potential invader would have to spend weeks within the deadly jungle before even getting a chance to lay eyes at the dark elf cities.
Ik’sumar is inhabited by several types of colossal beasts and monsters. For this reason, each city is built in shape of giant towers, hidden behind the tallest walls and massive metal spikes. Gigantism is not a luxury here, but a necessity of survival.

When it comes to treatment of outsiders, dark elves of Ik’sumar may appear as overly suspicious and rarely friendly. However, outsiders are tolerated and after some time, may even gain enouh trust to be considered equals. Light elves are urged to avoid visiting this kingdom, due to the never-ending conflict between Ik’sumar and Avora, kingdom of Light elves.
Slavery is allowed in this kingdom, and consists mostly of light elves captured during the raids into the enemy territory.


Divinity of the dark
Dark elves have the least effective birth rate of all elven races, and in an environment like Ik’sumar, they were forced to build a strong, tight community to survive.
This led to the creation of the most fascinating and unique side of Ik’sumar’s culture - the belief known as “Divinity of the dark”. This never-changing rule states that each dark elf’s life is sacred and can’t be taken by another dark elf no matter what. Even when it comes to criminal punishments, execution can only be applied to non-dark elves. Imprisonment and fines are the common measures for the majority of crimes, while the most severe punishment is banishment.
This is the main reason why dark elves often catch suspicious looks in other parts of the world – a lot of dark elves met outside of Ik’sumar may potentially be criminals, banished for horrible deeds. However this is rarely the case, because being banished from Ik’sumar means to be thrown out of the city into the wilds alone, with one weapon of choice and provision for only two days. Very few banished dark elves are lucky enough to trespass the monster infested jungle and to escape Ik’sumar.
Divinity of the dark is such powerful rule, that even the royalty is not immune to it. Current ruler of Ik’sumar, everyone’s beloved Dark queen Irilis, inherited the throne from her father after he accidently killed a dark elf servant and without hesitation has been banished into the wilderness eight hundred years ago. Hundreds of dark elves witnessed him being eater close to the gates of the city mere minutes of his banishment.


Monster hunters
Towering over cliffs and canyons, colossal constructions of dark elves serve as both homes and fortifications.
But don’t think that dark elves hide behind these walls and shiver in fear before the merciless nature. Dark elves of ik’sumar spend much more time outside of the city walls than you’d expect. Hunting monsters in small groups is the favorite activity in this land for both adventurous simple folk and regular army of the Dark queen Irilis. Monster hunting is actively encouraged through rich rewards for gathering of valuable monster parts or even monsters captured alive. It also serves as a measure of keeping the monster population in check - the only reason why Ik’sumar is considered to be only a weak imitation of the infamous Red python basin.

In the grand political scene of Karandia continent, Ik’sumar is viewed as isolated but not necessary hostile kingdom. Many nations have active trade deals with it, where the main trade goods are captured monsters, monster parts, unique fruits and high quality fabrics.
Representatives of other races can also be met within Ik’sumar cities, although in very low numbers.

The Dark throne
The seat of power of Ik'sumar. From here Dark queen Irilis rules the kingdom.
5 major cities of Ik’sumar are connected by a network of teleportation gates. They’re activated once a day for ten minutes, allowing the trade caravans and traveler to travel from one city to the other without the risk of trespassing the jungle. Naturally, the portal gate halls are guarded as heavily as the queen’s palace itself.

Black spire
This is the most populated city of the kingdom that serves as the center of culture, education and craftsmanship. A large number of various fighting and magic schools can be found here and most of them are easily affordable by simple folk.

Darkstar Academy
An elite magic school where only the gifted may join. Social status or wealth grant no privileges here - the selection process is exceptionally strict to all potential students. Status-wise this school is similar to Sunspire academy in Tamir, but unlike its cousin from the other side of the continent, it does not forbid the study and practice of even necromancy.

Greywall citadel
This massive citadel serves as a base of operation against Avora, neighboring kingdom of Light elves. It holds a large garrison of regular royal army and accepts help from enthusiast in numerous small-scale raids into the enemy territory. Light elves captured alive are brought here and sold to other cities as slaves.

Madori harbor
This is the only port city in Ik'sumar. Several private companies hold long running, successful trade deals with other kingdoms of the continent. This is the only city of Ik'sumar with significant population of representatives of other races than dark elves.

Bogmaw mire
This vast and dangerous swamp in the North-Western part of Ik’sumar serves as perfect natural barricade against Kraf empire. During its Golden age, Kraf empire suffered a crushing defeat by forces of Ik’sumar here. Difficult to find, in the depths of this mire stands an exceptionally crafted monument of a nameless dark elf rider standing on a pile of human bodies, dressed in Kraf armor of that age.

Jungle of silent dusk
The most Western area of Ik’sumar jungle. These dark woods are inhabited by numerous magical monsters and is usually avoided even by the most fearless dark elf hunters. In its depth daring explorers found ruins of unknown origin, ancient even by Ik’sumar’s standards.

Xelha isle
A small independent kingdom of dark elven outcasts. The isle lies outside of Ik’sumar’s zone of interest, and thus left alone to exist on its own.
edit delete