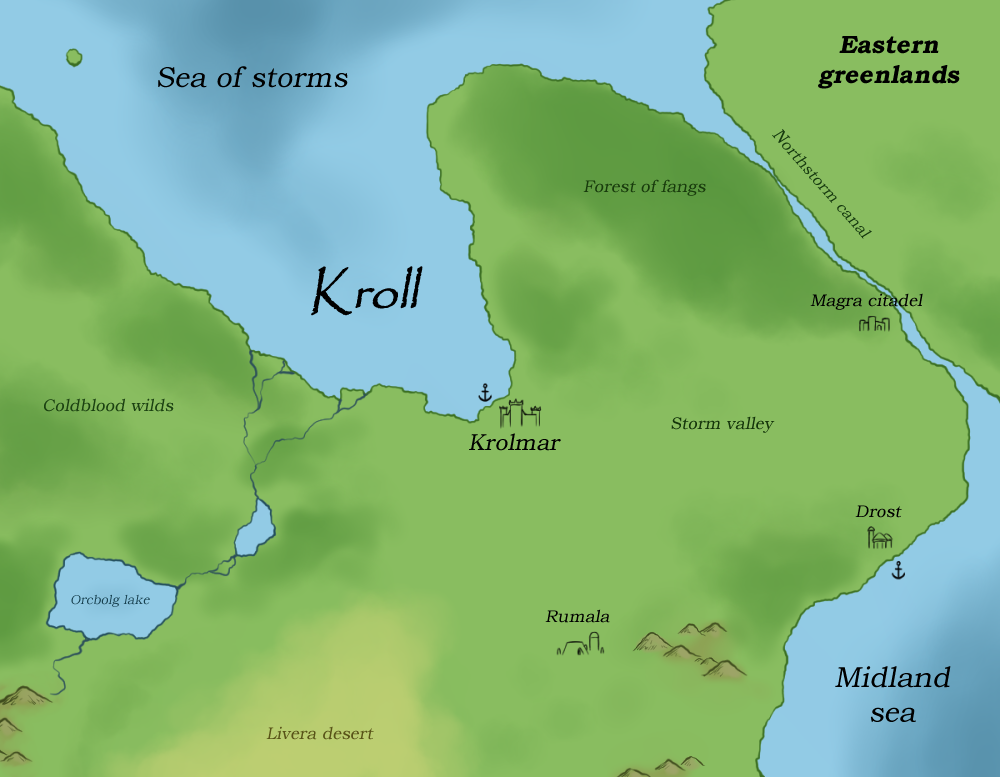 The kingdom of orcs
Born from the union of an orc chieftain and a human princess, this kingdom combines the best features of orcish and human societies. Excellent craftsmanship, cult of strength and bravery, strong tribal habits and traditions combine here with the unusual for orcs tolerance of other race, high technological advancement and fairness of laws.
Few outsiders chose to live here but those who dare, may expect a warm welcome. This is a harsh land to live in, but the one where a person in need may always expect a helping hand.


Krolmar
The capitol of Kroll. This is a large city but it only consists of small houses – orcs do not build anything with more than one floor. In the center of it stands the statue of Kroll, erected years after the return of the orcish hero home.
This is the only place where orcs of this kingdom can learn magic.

Magra citadel
A large military structure created in the 112th century. The Green tide may be gone, but the fear of a new one rising is still strong within people of this land. The army of Magra citadel performs numerous military operations within the Eastern greenlands territories, mostly aimed at prevention of large unions forming between the clans. Local traditions and customs are taken into considerations during such operations, that’s why only orcs can serve here.

Drost
A well-known port town on the shores of Midland sea, from where ships with Northern goods travel to Principalities, Dornia and Inginia. The most valuable export of Kroll are furs of beasts only met in this part of Karandia.

Rumala
This town was built on the spot where Kroll made the offering of peace to humans of Principalities. To this day it serves as a safe haven for travelers and traders who chose to take land route between the two kingdoms instead of the sea one.
Also it homes a large hunter’s guild that focuses on hunting unique monsters of Livera desert.

Forest of fangs
One of the most dangerous places in Kroll, these vast woods are inhabited by high numbers of vicious beasts and predator monsters. Unsurprisingly this is also the most favorite place for the most daring of hunters to collect furs, bones and meat of rare creatures, highly valuable goods for international trade.

Coldblood wilds
Orcs of Kroll always advice adventurers from travelling West, especially anywhere further past the Orcbolg lake. Nature here is mild and the population of monster is considered low, but orcs of Kroll believe that these lands are haunted. It’s important to point out that a lot of adventurers disappeared here without a trace, so perhaps these rumors are not all fiction.

Livera desert
A highly dangerous place with numerous unique monsters inhabiting it. Littered with ruins of colossal proportions, partially or fully buried beneath the sands, it is believed to be a home to an ancient civilization, which perished before or during the Great collapse.
Architecture of these ruins matches to the remains of colossal bridges found in the Northstorm canal.
edit delete