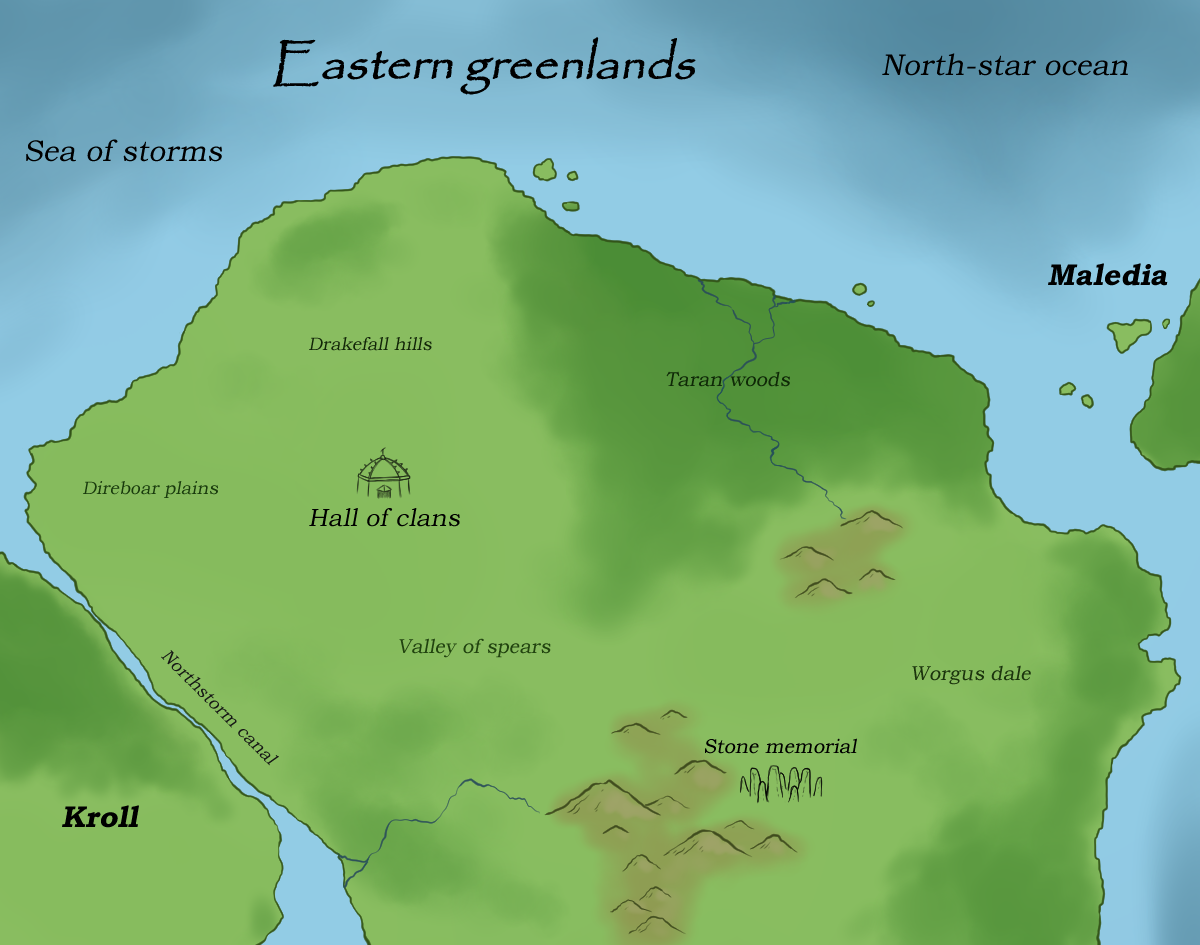 The circle of violence and rebirth
Eastern greenlands is a large region in the North-Eastern part of Karandia. Covered in vast plains, tall hills and mixed forests. This land homes a large population of orcs, divided between hundreds of medium and small clans. These clans don’t build towns and cities and rarely trouble themselves with cultivation or domestication of wild animals – instead they prefer to hunt and to live in small wooden huts, tents or even caves.
This is a wild place with savage rules and customs. Outsiders are not welcome here and even orcs from other clans often risk being attacks without a warning or reason. While smaller clans slowly gather strength and grow their population, larger clans clash in never-ending local wars, fighting for control over hunting grounds, for slaves or trade goods or just for the sake of it. Inevitably their numbers shrink, one of the warring clans suffers a crushing defeat and has to begin their growth anew while smaller clans take their place. The circle of tribal war is never-ending and continues for thousands of years.


Culture, religion and beliefs
The outside world view Eastern greenlands as a land of lost opportunities. It is considered to be a boiling pot of a prehistoric cultures which can’t possibly bring anything new or exciting to the world. Adventurers, monstrologists and scientists rarely travel here because of the risk of being attacked by highly xenophobic orcs.
However, this land has its own share of surprises. While orcish clans constantly fight between each other, it is near impossible for a clan to be wiped out in the process. The reason for this lies in a deep shamanistic belief shared among all clans, based on cyclical nature of all things. When a clan suffers a defeat and loses most or even all men in battles, victors spare women and children, following a very curious tradition.
Both boys and girls of young age are gifted weapons, so that they would be able to hunt and defend themselves from wild animals and monsters, while grown women are raped, so that they would bring new children for the weakened clan.
Wiping out a clan is considered an unforgivable crime, a terrible omen that angers spirits of the land. Such action usually leads to heavy consequences for the clan that committed it. If news about it reaches other clans, they would form a temporary union to hunt down the clan who broke the law and would wipe it out like a pack of sick animals. This tradition exists here for thousands of years and have been practiced in small and large scales – depending on the size and power of the clan that committed the crime more clans would unite to match its strength.
This custom is not exclusively practiced among the clans of Eastern kingdoms. One time in history the entire continent shuddered when the a colossal orcish army spilled out and engulfed almost half of the continent. In 110th century, when Damani invaded the Eastern greenlands and eradicated nine clans of orcs at once in attempts to intimidate them, the rest of the clans united under one banner and retaliated, swooping across the Eastern half on the continent as so called Green tide. In result one human kingdom perished completely, one barely survived and Principalities, which lied across the Midland sea, had to defend itself with combined army of its pricepts.
The wrath of orcish clans was so strong that the Green tide lasted for 40 more years, until it suffered a crushing defeat in Tamir peninsula, at the Day of burning sky. Orcs who survived that day returned to their homeland, to their clans and traditions, seeing the meteor rain that defeated them as a sign from Above that the time of Green tide has passed.

Another very important belief shared by almost all clans is reincarnation. Orcs of Eastern greenlands believe that after death their spirits are reborn in children of the following generations without any memories of their past lives. That is considered one of the main reason why the survival of each clan is so important to these orcs. If the clan is gone – the spirits would have no place to reincarnate at and would wander the lands aimlessly for all eternity.

Stone memorial
The age of the Green tide was the most important in the history of Eastern greenlands not only because it brought massive destructions to other lands and taught other nations a valuable lesson, but because of what it created.
For the first time orcs of this land managed to build a truly magnificent construction – a memorial for the nine clans destroyed by Damani. At the base of nine colossal stone slabs which were raised upwards rest remains of victims of human cruelty. To each clan its own stone.
Construction of this monument began after the return of the Green tide from the assault on Principalities and took several years to finish.

Hall of clans
Another important structure stands far to the North-West, in the middle of a vast green valley – Hall of clans. The place where clan leaders gathered to discuss the Damani’s crime and where the Green tide was officially created, became a near-holy site for the orcs. Several years after the battle in Principalities they’ve build a large hall of wood and to this day it serves as a place of peaceful meetings among the clans. Although… throughout the following centuries a lot of bloodshed happened here. After all, a blade is stronger than any words in this land.

Turan woods
Of all forests in Eastern greenlands this one is considered the most dangerous. Concentration of large predatory monsters here is exceptionally high, and only the most powerful orcish clans dare travelling here to hunt them. It is usually easy to distinguish members of a more powerful clan, as their outfits and armor often include bones, claws and skulls of strange, terrifying creatures who could only be met in Turan woods.

Northstorm canal
This canal is used by ships of different nations to enter and leave Midland sea. It separates Central and Eastern greenlands and serves as natural obstacle for the orcish clans from spreading further into the Western direction.
Hard to spot, but in several, most narrow parts of the canal, there can be found ruined remains of colossal ancient bridges that were once used to connect the two lands. Either they crumbled from time or have been intentionally demolished as a measure to contain the orcish hordes, it is hard to say.
edit delete