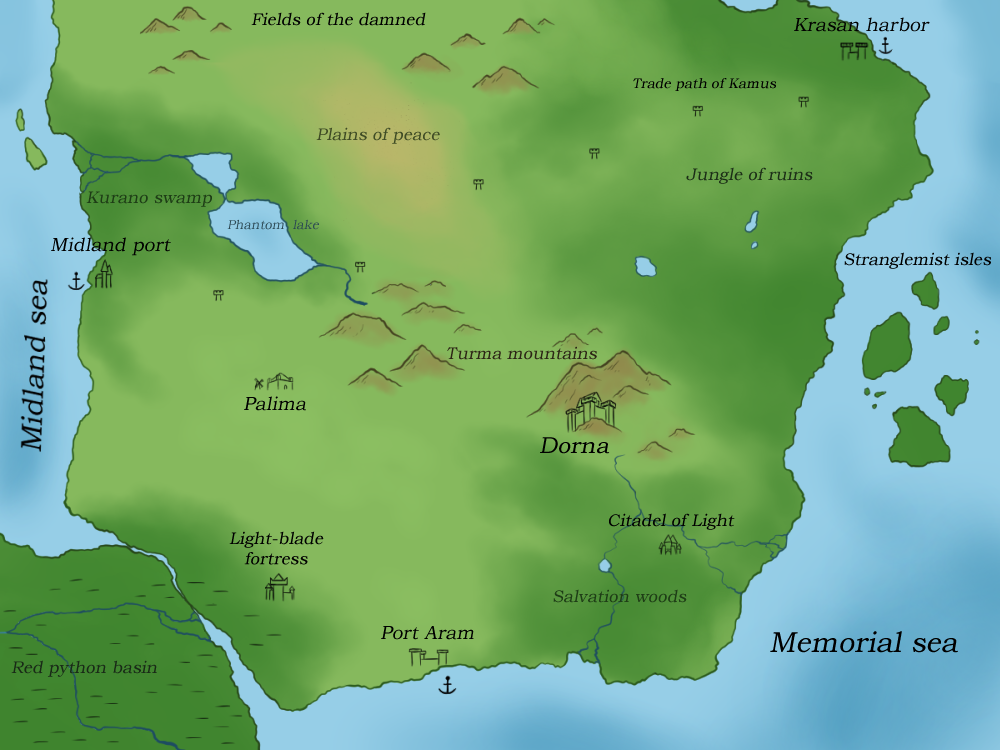 Dornia is a large and influential human kingdom with a complicated history. It was created from the ruins of Boltok kingdom, which in 110th century lost in the war against its ancient enemy Damani and shortly after has been nearly completely destroyed by the Green tide.
(Learn more about the origin of Dornia and the Green tide in the article “History of Dornia”)

Following so called Alem’s pact, signed in 118th century between king of Dornia Alem II and the Archbishop of the church of Purifying light, Modern Dornia is separated into two parts – Northern and Southern, each with their own laws and customs. Southern part is controlled by followers of the Purifying light church, who forbid use of any magic and who hate representatives of every non-human race.
Northern half is more than welcome to representatives of other races, except for orcs. The invasion of the Green tide left a deep scar in memory of the nation. Orcs are considered savages who should be shunned and avoided at all cost by Dornians. This deep irrational hatred often remains even in those who leave Dornia and spend significant amount of time in other lands, where orcs are not an uncommon sight. It’s fair to blame Dornian folklore for this, as the bulk of it is based on fables and tales where orcs are portrayed as creatures of pure evil.

In other matters Dornia’s culture and people are a lot similar to Tamir. Here live hard-working, freedom-loving people, proud of their nation and its achievements. They are not always fond of their nobles, but comparing to Tamir, the gap between nobility and simple folk in Dornia is relatively mild.

Dorna
Capitol of the kingdom. Built long before the Twelve-year war, this mining town was used by refugees from all over the region to hide from Damani raiders and orcs of the Green tide during the times of unrest. For centuries it grew into the most powerful city in the Eastern Karandia - well protected castle on the Southern side of the largest mountain in Dornia serves as an impervious gate, while the city itself is carved deep into the mountain, forming a vast interconnected web of tunnels, halls and districts.
The royal palace, treasury and the throne room are situated deep within the mountain and can only be reached through a straight, large corridor in the center of the city.

Fields of the damned
A cursed region separating the Southern and Northern halves of this Eastern Karandia. Artificially created, fully automated system of enchanted necrobeacons raise any humanoid, beast or monster that dies here as mindless undead.

Trade path of Kamus
Six small but well-fortified castles form a chain of safe spots for travelers and merchants from Krasan harbor to Midland fort. Built in 115th century and named after Kamus Longar, keeper of treasure of Dornia, who came up with an idea of a safe land trade path between Tamir and nations with access to Midland sea.
Garrisons of each castle constantly patrol the road connecting them, hunt down monsters and bandits. Also occasional undead who happen to wander too far from the Fields of the damned. Wealthy travelers can even hire soldiers of these castles as an escort.

Midland port
Since the times of Boltok and till the creation of the Trade path of Kamus this was one of the many small fisherman towns on the shores of Midland sea. Hidden in a small valley, it miraculously survived both Damani and orcs during the years of unrest and lived up to prosperity after nobles of Dornia began using it as main port of international trade via Midland sea. Nowadays this busy city could rival in its luxury with many capitols of Karandia.

Krasan harbor
Just like Midland port, this town grew after the Trade path of Kamus reaches the Eastern shore of the continent, becoming the main trading center with Tamir. But before that Krasan lied abandoned and ruined for four centuries. In 111th century Damani marauders left no stone unturned here and even left a small garrison to defend what was left. For some reason the news about the Green tide invasion did not reach them, and one fateful night all of them have been slain by orcs.

Port Aram
This medium sized naval town used to be the main source of income for Boltok kingdom, who actively traded with Inginia. Even the defeat in the Twelve-year war could not stop the trade going, thanks to powerful garrison who managed to throw back any attempts of Damani and orc invaders. However, unlike the two already mentioned port cities, things went very bad for Aram after the Great purge in 118th century.
To this day Aram is heavily controlled by the followers of the Purifying light church and prohibit ships controlled by non-humans to enter the port. The international trade here is currently at a very sorry state, so to sustain itself, the city mostly relies of fishing.

Palima
The largest city in Dornia, Palima used to be the capitol of Boltok before and during the Twelve-year war. After the great escape of Boltok king and his people to Tamir, Palima has been taken over by Damani, where just a few months later they have been defeated by orcs of the Green tide. The orcs did not cause much destruction to the city, even though they tried to set it on fire several times but failed because the majority of structures were made of stone. Orcs of the Northern clans never build large cities and taking control over such massive structure was not in their interest. That’s why after they looted the city, they simply left.
Palima stood abandoned only for a few years before it has been retaken by a small group of Boltok survivors and for the next four centuries used as fortification from future orcish raids. After creation of Fields of the damned, Palima slowly returned to its former glory as a center of culture and knowledge.
Here, in the end of 114th century for the first time appeared the cult of Purifying light, initiated by a former magician Augun Fardison.

Citadel of Light
Created in 118th century this city became the seat of power for the followers of Purifying light church. Only humans are allows to enter it, despite numerous attempt to lift this restriction by kings who ruled after Peten I. The power of the church is so strong in this place that it would openly oppose royal will if it goes against the teaching of the Purifying light.
Citadel of light has its own small army of paladins and witch-hunters who train without rest, awaiting the day when they get a chance to spread their belief far beyond the borders of Dornia.

Light-blade fortress
This massive fortress was created in 117th century as a necessary measure to combat the spreading of the Red python basin’s ecosystem. Flora, fauna and monsters of that place slowly but steadily cover new lands, and to hinder their advance, Dornia has to spend massive resources.
It is believed that the spread of the hostile ecosystem came possible due to irrational actions of members of Purifying light’s church, after they began actively eradicating all monsters from the region, including Reedlers who are known for their ability to cleanse environment they inhabit.

Salvation woods
During the times of unrest this mixed forest served as shelter for thousands of citizens, who were hiding from orcs and Damani. This is a rather dangerous place inhabited by numerous monsters, but if one knows the right pathways and the locations of sanctuaries, it becomes a perfect place to hide.
However since 118th century all of these sanctuaries are controlled by the Purifying light followers, thus any non-humans are not allowed to enter them.

Jungle of ruins
Long ago a powerful nation Boltania existed in this region, but after a civil war of 85th century it split into two parts – Damani and Boltok. The long and bloody war attracted numerous predator monsters and with their numbers growing this place became impossible to live in.
Littered with ruins of the old kingdom to this day, it might not be as dangerous as it used to be now, but is still considered a death trap for anyone who enters unprepared. This area has a sad reputation of being a home to a huge population of a very nasty predator plant – Hungry tuber.
Two castles of the Trade path of Kamus in this region hold the largest garrisons, always ready to offer escort for traders who make their way towards Tamir or from it. For a price of course.

Kurano swamp
With the rampant growth of Midland port the outskirts became an attractive home for countless perverted monsters. In fact, this forest and the land surrounding Phantom lake accommodates the largest population of P-type monsters in the entire kingdom.

Stranglemist isles
A group of extremely dangerous isles fully covered in jungle and inhabited by vicious predators. But not only of bestial and monstrous nature – these islands are used by pirates, where they build their hidden bases. Exiles and criminals from Dornia, Tamir, Inginia and other nations gather here and occasionally raid the surrounding lands, rob unfortunate trade ships coursing between Inginia and Tamir or simply fight between each other.
Navies of both respected nations often try to hunt down the pirates in the waters around the isles. Countless naval battles that took place here throughout millennia littered the bottom of the sea with sunken ships and treasures.
edit delete