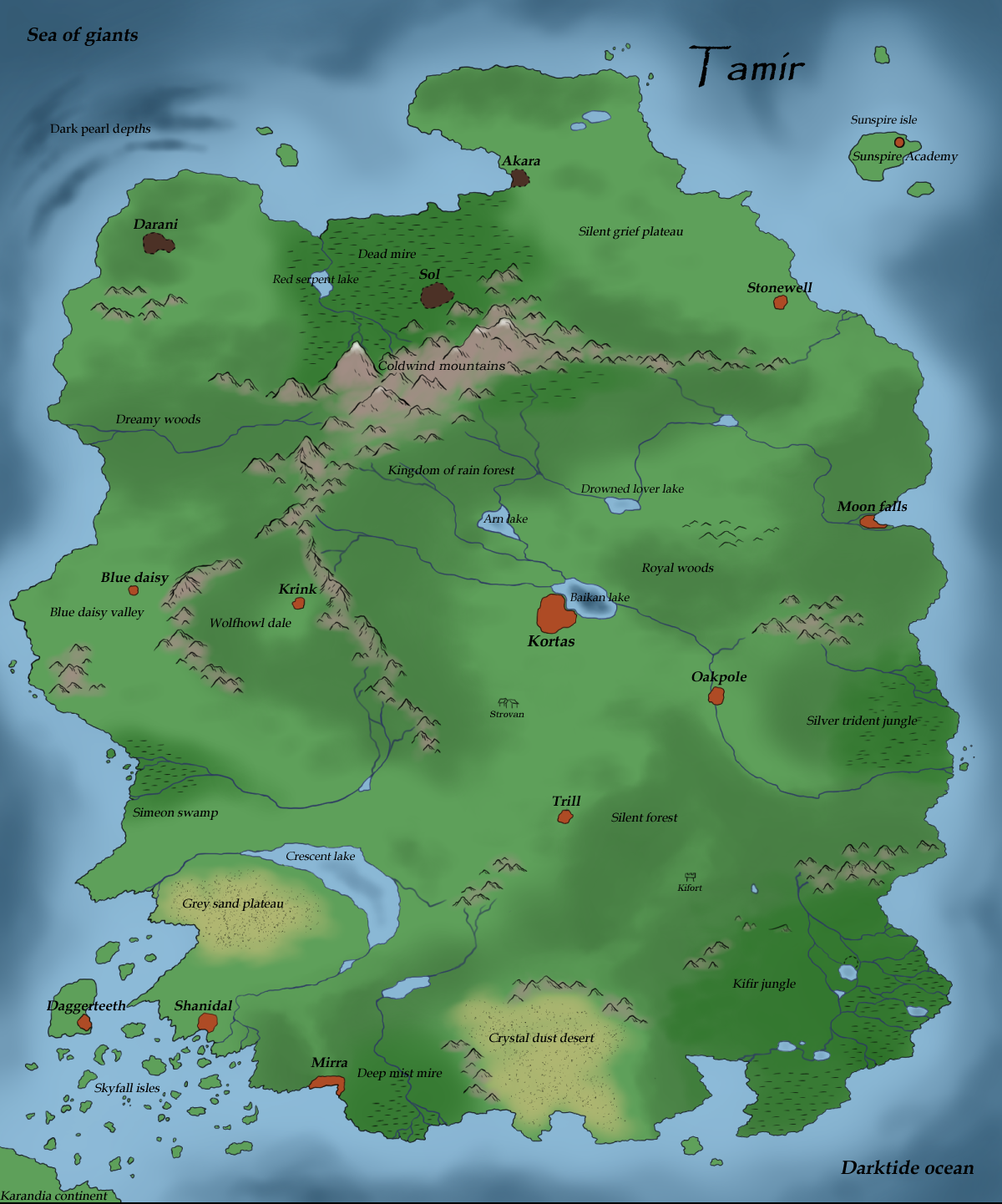 The kingdom with dark past
Tamir is a relatively young kingdom, established in 110th century on the Tamir isle. The early history of this nation is not properly documented and any details of its formation are represented by unconfirmed theories and myths. Most of them involve the rise and fall of the Green tide, war with the former owners of the isle, bloodthirsty nation of Sina, and a series of mysterious catastrophes which left Northern and South-Eastern regions of the isle uninhabitable.
(True origin of Tamir kingdom will be revealed in the comic Monstroniverse adventures)

The naval giant
On the global arena Tamir kingdom takes a strictly neutral stance. For the last thousand years It didn’t take part in any significant conflicts and not once closed its borders to refugees or trade routes.
Tamir’s economy strongly relies on international trade. While the kingdom itself doesn’t produce any unique trade goods of its own, the isle lies in the center of several important naval trade routes and serves as a transitional port for countless ships that pass it all year long. From Maledia to Inginia, from Avora and Principalities to the lands beyond North-star ocean – most of the ships make stops in the port cities of Tamir to resupply, repair and rest.
For this reason, Tamir has a strong fleet of its own, which constantly patrols surrounding waters, hunts pirates and dangerous sea monsters in order to keep these waters for the foreign ships as safe as possible.

Population and social divide
Tamir can be considered a relatively safe kingdom to visit and live in but it’s not without its own problems. A rather large divide between nobility and common folk is considered its biggest issue. And while the two social classes rarely clash between each other, existing in their own separated worlds, but strange and often inconsistent laws, reinforced differently depending on the social class leading to strong mutual disrespect and hatred.
Law enforcement in Tamir is highly selective, showing high quality only in cases that deal with nobility or crown’s direct interests. This caused Tamir to become a welcoming harbor to numerous criminals who flee other kingdoms in search of a new home.
Tamir has a strong regular army, but it rarely bothers to deal with such trivial matters as protection of people from monsters or goblin raids. Such duties lie on the shoulders of simple local folk, who are forced to organize their own militia groups, train and equip themselves with little to no financial support from the crown.


Tamir’s population mostly consists of three races.
Humans form approximately 70% of the population. Most of them are descendants of refugees from Boltok, a nation destroyed during the rise of the Green tide in the middle of 110th century.
Orcs, who used to occupy the Northern region of Tamir, but who had been driven away by a mysterious catastrophe within their former capitol Sol. These orcs assimilated within the population of Tamir, now calling the kingdom their home.
Light and wood elves, who used to be a part of a small nation Rivent, also fully destroyed by the Green tide.
Representatives of other races can also be met, but they’re more exception than the rule.
Despite such colorful population, racial tensions were never a thing on this isle. People of both social classes have a rather relaxed, calm view on life. Representatives of simple folk love stability and seek respect from the neighbors by being friendly, helpful and kind whenever it is possible. Such atmosphere is most pronounced in smaller villages and towns, and is very infectious.
Nobles of Tamir love luxury, prosperity and are known as passionate collectors. Some of them are ready to part with huge sums of wealth to acquire rare goods, artifacts and pets from the distant lands. And the sea-faring traders know that, often taking such items along with sole purpose of selling them during brief stops in the ports of Tamir.

Stonewell
A large settlement, surrounded by dozens of small outposts and populated mostly by orcs. It was created in 121st century after the tragedy of Sol catastrophe, which left thousands of orcs homeless. Nowadays Stonewell serves as an unofficial capitol for all Tamir orcs, and holds a large army with one and only goal – to keep the potential spread of Dead mire in check.

Kortas
The capitol of Tamir. Despite being the largest town on the isle, the population here is smaller than in both Mirra and Shanidal. The bulk of its size is formed by the royal palace with a unique, gigantic architecture. The true age of this palace is unknown, but it existed long before Tamir kingdom was created.
Kortas homes embassies of almost every powerful Karandian kingdom (except Ik’sumar and Kraf) and a prestigious magic Academy, popular among students from wealthy and noble families.

Moon falls
Arguably the most beautiful town of Tamir, spread across several large cliffs, connected by elegant bridges, and surrounded by numerous cascading waterfalls. This town’s pride is the second magic academy of the kingdom. The most accessible magic school in the entire Western half of the continent, where the basic knowledge of magic can be learnt by the simple folk who possess potential and ambitions.

Sunspire academy
A striking contrast to the magic academies of Moon falls and Kortas, Sunspire academy is a prestigious elite magic school with an exceptionally strict vetting process. The academy covers the territory of the entire Sunspire isle and has unique privileges and status within the kingdom. It even has its own small army and fleet, and serves as a small kingdom of its own, able to act independently from Tamir in numerous questions.

Sol, Darani, Akara and Dead mire
In the middle of 121st century a large bulk of the Northern Tamir became uninhabitable due to a strange catastrophe. In a short period of time the cities and the surrounding lands had been engulfed by an unnatural, quickly expanding jungle-like biological formation. Thousands of monstrosities spawned by this growth have driven the local orcs from their homes, and to this day remain an impenetrable obstacle to their former capitol. The reasons and circumstances of this tragedy remain a mystery, but all factors point out that the epicenter of the growth lies somewhere within the lost city of Sol.

Krink
the main mining town of Tamir, built at the foot of Southern sierra of Coldwind mountains. Cliffs here are tall and steep, full of precious metals and minerals.

Shanidal
One of the two largest port cities of Tamir, which also contains the largest population of light and wood elves on the isle. Traditionally, the ruling positions over this city are shared by the descendants of Rivent’s royal line.

Skyfall isles
Before the rise of the Green tide Tamir used to be a peninsula, connected to the mainland by a wide patch of land. However, during a historical event known as “The day of burning sky” in the end of 110th century this portion of land has been utterly destroyed by a powerful spell.

Daggerteeth
A large port city consisting of the main naval military base and the grand shipyard.

Mirra
Second largest port city of Tamir, separated into two major parts – the Portland and the Old town. Old town is infamous for the highest crime rate on the isle and its never ending gang wars.

Crystal dust desert
Mysterious region filled with countless minerals of various size and shape. A highly dangerous place, unfit for living. Even the air itself is believed to contain tiny crystal dust, which may kill anyone who breathes it for too long.
Some believe in its artificial origin, being an aftermath of some exceptionally powerful spell.

Kifir jungle
Impassable forest, inhabited by large numbers of deadly monsters and beasts. Believed to contain a large city of Sina, former rulers of the isle.

Kifort
Small castle at the border of Kifir jungle. Serves as base of operations for adventurers and explorers who are willing to try their luck in conquering the impassable woods.
edit delete