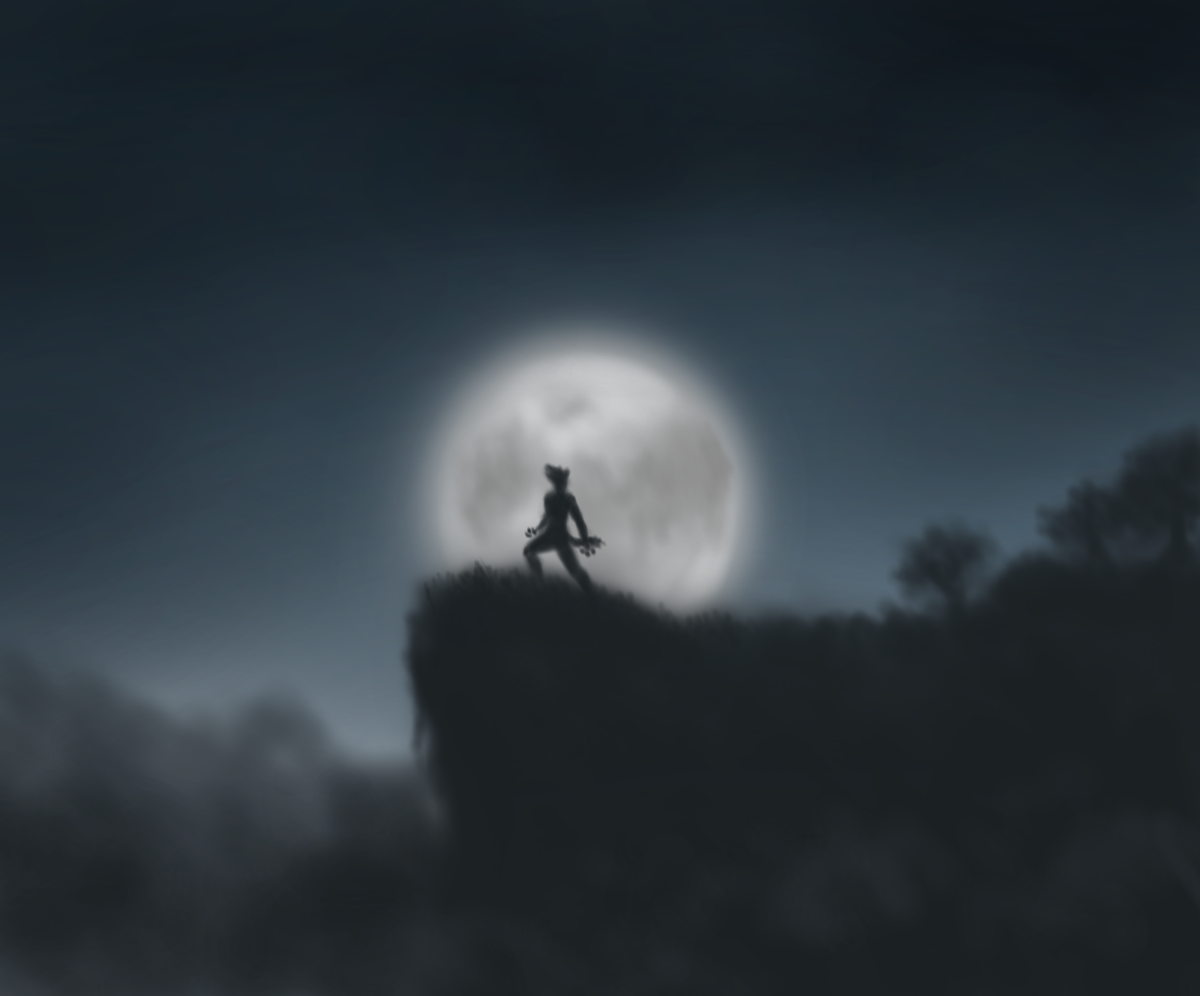 Second most famous curse, also widely exploited in literature all around the world. But unlike vampirism, it is presented much more accurately.
This curse is often mixed with shape shifting magic, which, in fact, is responsible for its creation. Both allow partial full physical transformation into a beast. However, unlike magic, the curse affects the body of the owner at all times.
Unlike other curses, Lycans are not forced to seek certain type of nutrition. The biggest challenge of lycanthropy is the constant struggle of humanity and animalistic nature within the person’s mind. This curse attempts to turn the afflicted feral, drive them crazy and consumed by primitive instincts. Strong will-power and constant focus of mind is the only way to keep it in check.
Alchemy provides certain recipes and potions to help this struggle, but even they do not fully solve this problem. This inner struggle is much more difficult for Lycans than for vampires, as it presents for as long as the person is afflicted. Unlike vampires Lycans can’t fully adapt to the curse.

Lycans can go through different stages of shape shifting. They can be in human form at all times, but once they need extra strength or speed, they can gain them by calling to their inner beast. Usually this process is followed by uncontrollable growth of hair on entire body, even those areas where hair shouldn’t grow at all (It’s important to note that extra hair fall off once Lycan leaves beast form, so no, they don’t need to shave their entire body every time it happens). The final form is the beast form, which resembles human very loosely and comes with massive changes in Lycan’s physiology.
Inexperienced Lycans typically experience intense spikes of pain and discomfort during shape shifting and rarely can control the process mid-way. But with experience comes control and the ability to shapeshift partially or to even reverse it as it happen.
Use of transformation carries dangers to the Lycan - the more bestial features the person gains, the more intense inner struggle becomes. No Lycan can lives in beast form at all times without losing themselves completely.


Apart from the ability to shapeshift, Lycantrophy offers other benefits to its carrier, in both humanoid and beast forms:
- heightened senses, especially smell detection and hearing.
- Increased strength, high resistance to cold, heightened endurance of pain and increased regeneration, similar to the Gift of nature of the same name.
- Lycans are much harder to distinguish from normal people in their humanoid form, as their appearance doesn’t go through any specific changes. Some male Lycans may have more facial and body hair than before being affected by the curse, but such observation may hardly be used as evidence for any accusations.

Another thing that stories got right is Lycans’ weakness to silver. Wounds caused by objects or weapons containing this material lose their regenerative abilities for a significant amount of time.

Of all known curses Lycanthropy has the most well-documented origin history, expressed well in both historical archives and folklore stories. Let’s take a look at a condensed version of the events that led to it.

Shortly after the Great collapse a chaotic age of civilization reigned all over the planet. In relatively short period of time multiple kingdoms rose and fell, unable to survive in the new hostile environment.
Somewhere in the end of the first millennia after the Great collapse one such kingdom appeared in the central region of Karandia and was called Lycaria. Vast valleys and mountains covered in colossal ancient forests infested with monsters hardly were fitting for a small nation to survive. But despite all the difficulties, people of Lycaria found a risky yet effective way of survival through the wide use of Nature magic. A tool that they adapted and perfected through tireless work of their scholars.

Numerous spells to soothe and even control beasts and monsters became prized legacy of Lycaria, may of them outlived the nation itself and can be encountered even today.
But they didn’t stop there. With Nature magic playing a huge part in the Lycaria’s culture, its influence rose on par with the nation’s prosperity and ambitions. From just a tool of survival it became a subject of worship. Scholars became Mystics, Spells became Gifts of the wild. No longer people of this nation wanted to simply survive in the wilds – they craved to conquer them.
“If we can’t defeat monsters, we will become monsters” the famous mantra of Lycaria expressed the course of unprecedented exploration of Nature magic. An entirely new branch of spells has been created – Mutation.
Spells of this branch allowed people to take partial of full form of beasts. Allowed them to adapt and harness abilities unavailable to simple humanoids. And the access to this highly dangerous magic was not simply limited to the tight circle of Mystics. It has been widely taught and encouraged to use among the entire population of Lycaria.
After three hundred years, during its peak of prosperity Lycaria became known as the Nation of beastmen. In those chaotic times it was the only nation in the world which no longer feared the wilds but lived in harmony with them and even had power to influence them.
During these times the only conflicts Lycaria knew were the internal ones. Not all could handle the bestial instincts and cruelty which inevitably crept into one’s psyche – an inevitable side effect of mutation spells. On the other hand, greed and lust for power are inseparable traits of humanity, and become especially active during peaceful times of prosperity.

Wide access to powerful spells of mutation created a strange precedent within Lycaria’s society. When even the weakest held power to rip whoever they wanted apart, when even a minor disagreement between neighbors could lead to a bloodbath – the nation became too hard to control. Impulsive behavior and aggression became a norm on the streets. The nation became a threat to itself. An unstable beast that needed to be taken under control…
Or at least, such were the ideas the Elders of the nation held. They were unhappy about losing influence over the population and craved to return limitless powers they once held.

This is when the established principals of Lycaria have been betrayed by the Elders. They summoned the most gifted Mystics and tasked them with creation of new, even stronger spells of mutation. This time the new spells would not be shared with the population. They would be used only by the Elders and those most loyal to them.
But to create anything more powerful than the nation already possessed meant to delve into a highly dangerous territory or life origins. Ancient artifacts of questionable origin and unknown power have been collected from all around the world and a series of terrifying experimentations took place. They starte with prisoners of war and criminals, and ran out of those, continued with their own citizens. Twisted experimentations on mutation, pushing living bodies to unthinkable limits, inevitably leading to loss of mind or deaths.

At some points these experiments stopped being secrets of the Elders and became known facts among Lycaria. People of every social layer split into sides, signaling the start of an all-out civil war. During days of internal bloodshed several Elders were pushes back into Lycaria palace and locked themselves inside. Desperately, they sought any means to turn the tide of war and descended into the storage of ancient artifacts they’ve experimented on.
It is unknown what exactly they’ve attempted to do, but on the night of that day a colossal outburst of rampant mutations spread out of the palace and far beyond the walls of city itself. Overnight most population of the capitol has been struck by an unknown affliction that twisted and ravaged both their bodies and minds. The affliction didn’t discriminate, from those that followed the corrupt Elders and those who wished overthrow them to civilians who took no part in the struggle everyone in the city became afflicted with wolf-like appearance and driven into feral, animalistic state of mind.

Newly changed Lycan people quickly turned on one another in a night of blood and frenzy, damning the Civilization. Feral Lycans that survived the slaughter in the capitol escaped the capitol and spread all around the land, finding and infecting populations of other settlements of the kingdom. The curse of Lycanthropy in its early stage differed from the one we know today. It spread like a wild-fire, consuming almost the entire nation within just a year. As for the rest of the settlements who reacted fast and closed their gates to the infection, without the military support of the capitol became targets of hostile and jealous neighbors who didn’t dare to attack Lycaria in its full power. Soon even these settlements fell under the constant raids and sieges. Lycaria ceased its existence.

With the nation’s collapse, for a long time the territories became uninhabitable due to large number of feral Lycans. The first generation of Lycanthropes who survived and bonded together were seen as nothing more than humanoid-like monsters that bore a distinctly wolfen appearance. Acting similar to wolf packs, they were hostile to any outsiders and to other packs. Surrounding nations dared not trespass their territories, fearing not only the might of the beasts, but also the further spread of the infection. For the longest time Lycans have been killed on sight anywhere outside the borders of former Lycaria.

Throughout the next two hundred years the characteristics of the curse began to change and weaken. With every new generation humanoid side became more and more dominant, slowly taking under control the animalistic behavior. Carriers of the curse became civilized once again and slowly but steadily began rebuilding what was lost. The feral side of the curse never fully gone away, but carriers of the curse have learnt to endure it and to even use its power to their advantage.

Strangely enough, descendants of Lykaria never re-created a nation of their own, and instead preferred to exist in small groups. With the end of the chaotic post-Great collapse age, they’ve spread across the world and assimilated within other nations. Even to this day every nation contains small communities of Lycans who rarely act openly but who are believed to keep contact among each other.
Each such community has different set of values and goals, but each resembles a small family with strict hierarchy and traditions. The idea of a wolf pack is deeply rooted in the mindset of a Lycan. Some choose to live in the large cities, others prefer to stay away from civilization, building small settlements of their own in the untamed wilds. Individual Lycans who don’t know about such communities or even refused to join them are rare but they exist too.