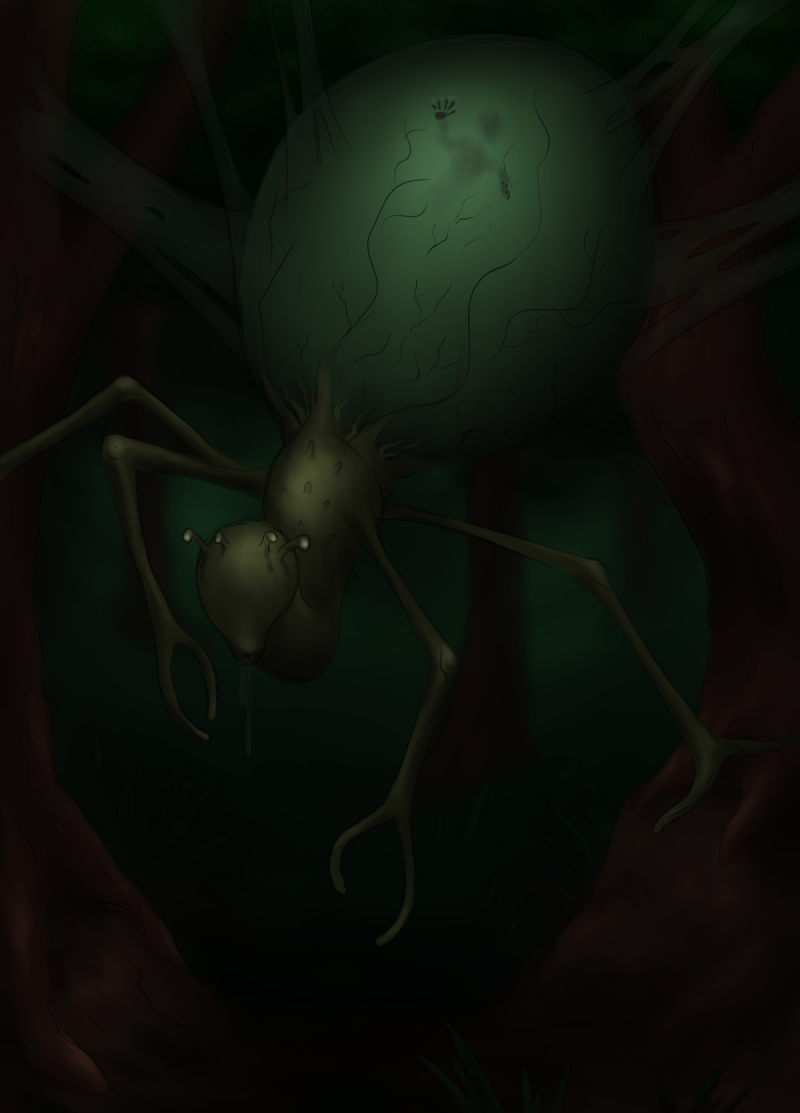 The weakest of the strongest
Vile egg is one of the better studied S-class monsters, found on the outskirts and in the depths of Red python basin, Ik’sumar and Nazmin jungle. Individually, a Vile egg is considered the weakest monster of the S-class category. This fact is soundly compensated by the numbers a single hunting party can consist of. Always in packs of up to ten members, these monsters travel through the jungle like a single unit. Their flexible bodies and grotesquely long arms are deceptively strong and allow them to effortlessly travel in any direction and on every surface. Once a Vile egg spots a fitting prey, there is no escape from it.

Their snail-like snouts don’t have any teeth, so they swallow their prey whole while it is still alive. This limits the range of prey Vile eggs hunt upon, forcing them to focus only on small and medium sized mammals and monsters. Humanoids, of course, fit into the menu perfectly. A single Vile egg can catch and swallow multiple victims at the same time, losing no speed or flexibility afterwards.


Deadly slumber
The most terrifying part about Vile eggs is what they do to their victims. Once swallowed, the prey is sent into the giant spherical container on the back side of the creature. The container is filled with unknown mucky liquid, which quickly saps the strength of the prey and forces it into deep nightmare-filled sleep.
(Known from the testimonies of the few lucky survivor rescued from within slain Vile eggs in a relatively short period of time after being captured)

As the victim experiences countless nightmares, its lifeforce is slowly drained out of their body, until only a grotesque, twisted corpse is expunged out of the sphere. Some Monstrologists believe that this happens from the mysterious ability of the liquid to manifest horrors experienced by the victims in reality. The more believable theory states that this happens during the final stage of digestion, when the victim twists and convulses from nightmares while their bones and tissue are already partially liquified. The victim simply maims itself in agony.
Both groups of Monstrologists are united in the belief that the nightmares witnessed by the victims play a crucial role in Vile egg’s feeding. It is as if the creature feeds not only on lifeforce, but on the negative emotions as well.

Unfortunately, Monstrologists could never successfully extract and study the mysterious content of Vile egg’s sphere. The liquid loses potency near instantaneously upon being exposed to the air.